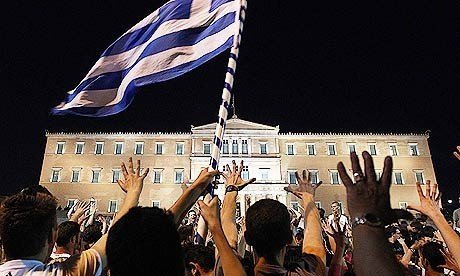 Greece is not the “democracy’ we learned about in our history books. The famous Greek general, Pericles, who 2,400 years ago said, “It is true that we (Athenians) are called a democracy, for the administration is in the hands of the many and not the few, with equal justice to all alike in their private disputes,” must be rolling around in his grave.

The shocking truth is that Greece got free of Ottoman rule in 1830, then went through two Balkan wars, a Nazi occupation during World War II, a civil war (communists-royalists) and a coup d’?tat in the 1960’s. Greece didn’t become a presidential republic and a parliamentary democracy until 1975!

The country was and still is run by “families”; the Papandreous, Mitsotakises, Karamanlises etc. for decades and should be considered more an oligarchy than democracy. As each party (family) came into power and it was their turn to “do favors”; those temporarily not in power “hush up” until it’s their turn again in the next election. These favors ? either jobs in the public sector, contracts or law adjustments filter down the “family lines? and with an almost “six degrees of separation? motif, one member gains and the boons eventually reach everyone in one way or another.

It has been whispered that there is oil and natural gas in the Mediterranean, Thesally and Grevena, the Germans during the occupation fueled their equipment with oil from the island of Zante and that Greece sits on untapped rich natural resources. Uranium exists in Macedonia (around 10,000 tons) and in Rodopi and Ikaria, gold deposits in Halkidiki, minerals (Greece is one of the largest producers in the EU of nickel, magnesium etc.) and that these resources are unexploited. (Source) (see resource links below)

According to the Wall Street Journal article, Busting North-South Stereotypes

(Which) workers in which EU countries work the longest weeks?

“Tops are the Greeks, who work on average 42 hours a week. Spain and Portugal aren’t far behind with a work week of around 39 hours. And where is the shortest work week in the EU? That would be in the Netherlands, under 31 hours a week.

Germans on average work just under 36 hours a week, significantly less than the hard-working Greeks they are now bailing out.?

Is it because the Greeks want their “Zorba-like? lifestyle and don’t and didn’t want to get too involved in the “big worldwide commerce game”, is it their arrogance (or false bravado hiding a sense of powerlessness) that makes them feel above such things?

They convince themselves that their lifestyle is superior and more “human” even though poor. People immediately settle for their public sector jobs (which employs one in five Greeks), and concentrate on their marriages, their children, their children’s education and their houses in the villages they go to in the summer. Some more ambitious Greeks, work hard to send their children off to foreign countries and hope help will be sent back or the entire family might immigrate. This lifestyle interspersed with a little soccer and politics from time to time to keep things interesting leaves a huge middle class living within their means and some “entitled” born with “family” names (the plutoarchy) hoarding the wealth in foreign bank accounts.

Greece saw a haphazard handling of the drachma, uncontrolled inflation for years on end, and then a final desperate leap (with nothing to back themselves) into the euro.

During the last decade Greek banks advertised loans during holidays with simple pitches of, “Here, take a $3000 euro loan to buy presents for your children.? Loans in Greece were doled out like chewing gum to kids, given left and right for Easter, Christmas, and summer excursions to the islands. Just having a car or a friend with a house to undersign was enough.

The relatively new concept of credit cards were stuffed into the hands of people who knew nothing about handling debt; given to a populace that dealt only in cash until the late 80’s and to the uneducated who found it surprising that in order to write a check you have to have money in the bank to cover it. During the 90’s the common practice (if you could get a checkbook), was to write a post-dated check to pay for merchandise, then merchants would sign-over these checks to their wholesalers to buy their stock (buying and selling with crumpled up, signed -over checks with sometimes up to 20 signatures on the back). A very corrupt stock market suddenly emerged in 1987 and then debilitating stock market scandal (George Koskotas scandal 1989) which all about knocked out the emerging nouveau riche for the next decade. For the final blow lets add the debt of the 2004 Olympics and the corrupt priests in Mt. Athos trading a lake for billions of dollars in prime Greek real estate into the mix. (see article: Can a Greek Monastery Be Ground Zero of Global Financial Meltdown?)

Cash flow pumped by loans, so most Greeks had cell phones and home cinemas before the rest of the world. More loans to bolster non-existent cash flows and those precious homes in cities and villages the grandparents and parents struggled for centuries to keep in the family; homes that enabled the public sector to live on their minimum wages without paying rents or mortgages, were “all of a sudden? confiscated by the banks. Suddenly people realized they couldn’t live on their public sector wages – a nasty blow to the infamous, kefi (the Greek equivalent of joie de vivre) and a big blow to their lifestyle, identity and pride.

In any case, the austerity measures are severe. Pension and salary cuts, under 25 years olds not even a minimum wage, 23% value tax, private sector employees unpaid for months on end, property taxes added to electric bills so the elderly and poor families living on pensions in below zero villages in Greece froze to death in the dark of winter.

After living on an off in Greece for 25 years, I never met one person who wasn’t aware of the “situation?, embezzlement, scandals, favors, as the youth sat in coffee shops until their late 20’s and early 30’s. Those unemployed or who lost their homes went to their family homes if times got tough and shared their parents and grandparents pensions. On the one hand, the majority expressed a sense of victimization inherited from those centuries of occupations and on the other a small group of self-righteous protestors and rebels exist who believed they could change something with their protests and philosophical political rhetoric.

At first, it appeared to me that this denial, this lack of verve or ability to change was caused by those many years of occupations and powerlessness, and the fact the Greece is relatively a very young country, not the country touted in the history books. I believed for a while it may have been that all the “good? people left, studied abroad and immigrated to countries without kings and oligarchs.

And then it dawned on me after living with these people so many years and watching them during this crisis that the Greeks have never suffered major consequences for their actions (destruction caused by the wars and occupations don’t count because those were not particularly self-inflicted).

According to some Twelve-Step Programs:

“A person who is acting self-destructively has no reason to change if they don’t ever suffer consequences for their behavior. If they are rescued from consequences, they are enabled to continue practicing their addiction.?

When times are tough, Greeks escape to foreign countries when they can and those freed from the victimization and enabling mostly succeed. But those left behind end up in their parent’s living rooms or with public sector jobs; unaware of their “addiction? to their lifestyle.

When a person refuses to help themselves they just fall into the hands of enablers. Enablers are people who save and rescue you even though you continue to live in a self-destructive way. It’s one thing to give help from time to time, but enablers are actually doing the rescuing for themselves, because they can’t take the pain or live the consequences of seeing someone destroy themselves. It is essentially dishonest and co-dependent behavior. Essentially the enabler has to learn good boundaries and the “addict? has to get the full brunt of the consequences, otherwise nothing will ever change.

Are the uprisings towards the austerity measures required by the European Union, IMF and imposed by the Greek government, a Greek “awakening?? Are the Greeks finally getting sober or are they the wailings and pain of an addict looking for its dose? And even if they have finally “grown-up? and have realized they want to take their lives into their own hands, will their co-dependent enablers let them?

What do you think?

A review of recent hydrocarbon exploration in Greece and its potential, A. Mavromatidis,Technological Educational Institute of Crete, Dept. of Natural Resources & Environment, Chania, Greece.