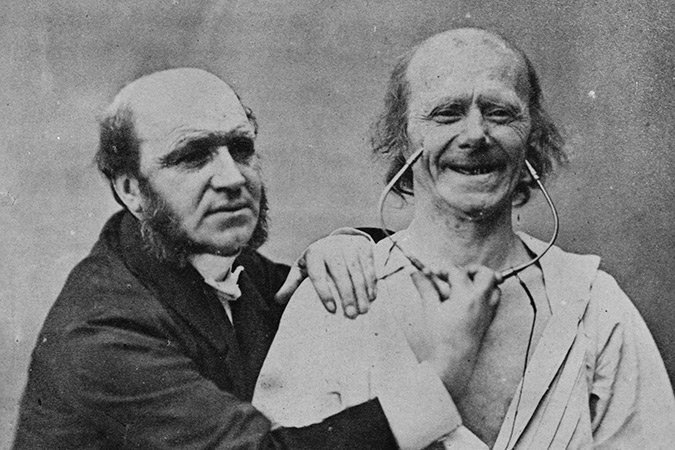 06 Dec Science news: Why a smile is contagious

In the award winning and very inspiring, short film by Kurt Kuenne, Validation (see YouTube video below), not only is the value of validation and acknowledgment explored but also how highly contagious smiles are and how some smiles just can’t be faked.

What is a smile though, and why do we do it?

Darwin was one of the first to explore this in his book, The Expression of the Emotions in Man and Animals, published in 1871. He mentions in the introduction his gratitude to the French anatomist Duchenne de Boulogne, who published a small book called Mecanisme de la Physionomie Humaine in 1862 in which he analyzed the movements of the facial muscles by stimulating them with electricity and carefully studying the contraction of each muscle in detail. He also came to a conclusion that some of these muscles are not controlled by the will.

“Observing differences in the appearance of spontaneous smiling and a smile resulting from electrical stimulation of the zygomatic major muscle, Duchenne wrote: The emotion of frank joy is expressed on the face by the combined contraction of the zygomaticus major muscle and the orbicularis oculi. The first obeys the will but the second is only put in play by the sweet emotions of the soul; the. . . fake joy, the deceitful laugh, cannot provoke the contraction of this latter muscle.. . .The muscle around the eye does not obey the will; it is only brought into play by a true feeling, by an agreeable emotion. Its inertia, in smiling, unmasks a false friend. (1862)

Darwin came to the conclusion that some of our facial movements are hardwired in our brains and that man and animals “express the same state of mind by the same movements.”

Paul Ekman, a psychologist, who directs the Human Interaction Laboratory at the University of California medical school in San Francisco and carried on Darwin’s work named this involuntary and spontaneous smile that uses both the zygomatic and orbicularis oculi muscles “the Duchenne smile“. In his paper, The Duchenne Smile: Emotional Expression and Brain Physiology II, he goes on to mention 14 other types of smiles but generally came to the same conclusion that:

“…contrary to the belief of some anthropologists including Margaret Mead, facial expressions of emotion are not culturally determined, but universal across human cultures and thus biological in origin. Expressions he found to be universal included those indicating anger, disgust, fear, joy, sadness, and surprise.” Wikipedia

In the Scientific American article, Why do we use facial expressions?, Mark A. W. Andrews states:

Recent work supports Darwin’s theory that smiles, grimaces and more nuanced expressions are hardwired -an artifact of living in social groups. For example, studies show that infants, including those who are blind or have underdeveloped brains, use facial cues to tell their parents how they feel. Infants communicate with their faces even before they are old enough to understand the meaning of their own expressions. Because humans depend on one another for survival, we must communicate; facial expressions may have evolved as efficient ways to telegraph feelings and intentions.

But why are smiles or any emotion for that matter so contagious?

According to a Harvard Science article, Smile and the world smiles with you, but why?, author Loren Gary states:

We now know that the brain is structurally designed for sociability: Whenever we interact with another person – whether in the boardroom or the bedroom, the classroom, the marketplace or the playground – a brain-to-brain connection, or neural bridge, is formed.

“A previously unknown class of neurons — mirror neurons — acts like a neural Wi-Fi system, monitoring everything the other person is saying and doing,” explained Goleman, who received his Ph.D. in psychology from Harvard. These neurons serve a synchronizing function, activating the same part of our brain that is being activated in the speaker’s brain. This is what keeps a conversation on track. For example, said Goleman, “In the buildup to a first kiss, these synchronizer cells are what tell you, ‘Now.’” But if you miss that signal, he continued, “and ask, ‘Is now OK?’ — you’ve blown it.”

From the Society for Neuroscience on Mirror Neurons:

Before the discovery of mirror neurons, scientists generally believed that our brains use logical thought processes to interpret and predict other people’s actions. Now, however, many have come to believe that we understand others not by thinking, but by feeling. For mirror neurons appear to let us “simulate” not just other people’s actions, but the intentions and emotions behind those actions. When you see someone smile, for example, your mirror neurons for smiling fire up, too, creating a sensation in your own mind of the feeling associated with smiling. You don’t have to think about what the other person intends by smiling. You experience the meaning immediately and effortlessly.

In the Scientific American article, The Mirror Neuron Revolution: Explaining What Makes Humans Social, neuroscientist Marco Iacoboni discusses how mirror neurons are the only brain cells that are specialized to code the actions of other people. These neurons lead us to “simulate? within ourselves what another is feeling and doing.

“When I see you smiling, my mirror neurons for smiling fire up, too, initiating a cascade of neural activity that evokes the feeling we typically associate with a smile. I don’t need to make any inference on what you are feeling; I experience immediately and effortlessly (in a milder form, of course) what you are experiencing.”

As an interesting aside, he noted that:

Does this mean if we watch violent movies or television programs that we will “simulate? these states within ourselves? Iacobani says there is some evidence of “imitative” violence after watching media violence but he mentions:

“This is a tricky argument; of course, because it forces us to reconsider our long cherished ideas about free will and may potentially have repercussions on free speech. There is convincing behavioral evidence linking media violence with imitative violence.”

So, we are hardwired to smile, a real smile can’t be faked and it is contagious because our brains have mirror neurons that make us “simulate” within ourselves the states of others around us.

Makes you think twice about who you hang around with and what you watch on the tube.

The short film, Validation will definitely “simulate” a smile within you and get those involuntarily stimulated orbicularis oculi muscles around your eyes moving.

The mirror neuron system and the consequences of its dysfunction, by Marco Iacoboni and Mirella Dapretto, Nature Reviews Neuroscience 7, 942-951 (December 2006)

Smile and the world smiles with you, but why? by Loren Gary, Harvard Science

Why do we use facial expressions? Scientific American