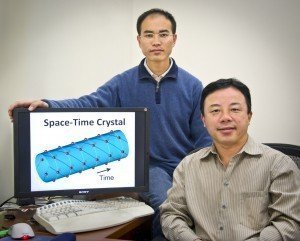 Crystals in our quartz watches steadily and accurately keep time in our 3D world but how about extending crystalline attributes to movement in time and space and add a fourth dimension?

An international team of scientists led by researchers with the U.S. Department of Energy (DOE)’s Lawrence Berkeley National Laboratory (Berkeley Lab) have proposed a process for building an actual four dimensional “space-time crystal? that not only would create an infinitely running clock but a clock that could possibly survive the heat death of the universe.

In July 2012, Frank Wilczek, the Nobel-prize winning MIT physicist, mathematically proved that a time crystal can exist but at the time acknowledged his idea on how to create one was incomplete. Recently, an international team in a paper titled “Space-time crystals of trapped ions.? Tongcang Li, Zhe-Xuan Gong, Zhang-Qi Yin, Haitao Quan, Xiaobo Yin, Peng Zhang and Luming Duan, have described “what they believe is a real-world process for creating an actual space-time crystal that could conceivably be carried out in just the next few years.?

“Since crystals naturally align themselves at low temperatures and because superconductors also operate at very low temperatures; Wilczek proposed that the atoms in such a crystal could conceivably move or rotate and then return to their natural state naturally, continually, as crystals are wont to do as they seek a lowest energy state.? (Source)

The Berkeley model proposes a cloud of beryllium ions trapped inside an electromagnetic field that forces them into a circular pattern. The ions all have the same charge and so repel each other, naturally ordering themselves in equilibrium.

“The electric field of the ion trap holds charged particles in place and Coulomb repulsion causes them to spontaneously form a spatial ring crystal. Under the application of a weak static magnetic field, this ring-shaped ion crystal will begin a rotation that will never stop. The persistent rotation of trapped ions produces temporal order, leading to the formation of a space-time crystal at the lowest quantum energy state.” (Source)

“These highly organized atoms would also move around, even when they’re cooled almost to absolute zero. That’s because the magnetic field would give them a small nudge, setting them in motion forever. The very fact of their rotation gives them a time dimension.?

“Great progress has been made over the last few decades in exploring the exciting physics of low-dimensional crystalline materials such as two-dimensional graphene, one-dimensional nanotubes, and zero-dimensional buckyballs. The idea of creating a crystal with dimensions higher than that of conventional 3D crystals is an important conceptual breakthrough in physics and it is very exciting for us to be the first to devise a way to realize a space-time crystal.? says Tongcang Li, lead author of the PRL paper and a post-doc in Zhang’s research group. (Berkeley Labs)

“Wilczek had also theorized that a working time crystal could be made into a computer, with different rotational states standing in for the 0s and 1s of a conventional computer.?

A clock that may survive even if the universe succumbs to entropy or “heat death? is a fascinating concept but “we focus on a space-time crystal that can be created in a laboratory,” says Li. “So you need to figure out a method to make a laboratory that can survive in the heat-death of the universe.”

And on an alternative side, Dr. Joseph P. Farrell in his article on these “space-time crystals? mentions:”If one has a potential technology that can engineer “space time locally? on the laboratory bench, as it were, then to weaponize that potential would, ultimately, make our largest thermonuclear bombs look like firecrackers.? So, let’s take great care.

Like the recent discovery of graphene (from which materials like nanotubes with structures one molecule thick and so strong “an elephant on a pencil could only break it?), we now might possibly have computers which will run perpetually on rotating ions.

Computer that could outlive the universe a step closer, by Jacob Aron, New Scientist

A Clock that Will Last Forever Berkeley Lab Researchers Propose a Way to Build the First Space-Time Crystal, September 24, 2012 by Lynn Yarris.