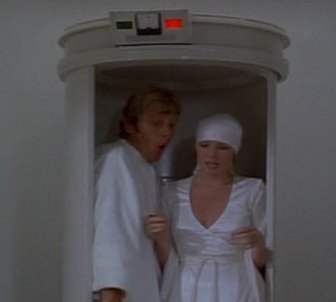 According to science author Hank Hyena’s article, Sexbots Will Give Us Longevity Orgasm in H+ magazine (December 2009), human-robot interaction researcher, Dr. Henrik I. Christensen, of the College of Computing Georgia Institute of Technology and director of the Center for Robotics and Intelligent Machines predicts fully-functioning sex robots by 2011.

The article goes on to mention some of the health benefits of orgasm:

Walter Last, in his article, Healing with Sexual Energy adds:

“Wilhelm Reich was the first scientist to describe the nature and purpose of the orgasm as a discharge of excess bio-energy with the additional liberation of feeling energy, and he also recognized the negative consequences of blocked sexual energies.”

Besides these obvious health benefits, Hyena humorously goes on to mention some psychological and sociological benefits as well. Sexbots don’t have:

? headaches, fatigue, impotence, premature ejaculation, pubic lice, disinterest, menstrual blood, jock strap itch, yeast infections, genital warts, AIDS/HIV, herpes, silly expectations, or inhibiting phobias. Sexbots will never stalk us, rape us, diss us on their blog, weep when we dump them, or tell their friends we were boring in bed. Sexbots will always climax when we climax if we press that little button on their butt.”

But Last mentions that in addition to its dopamine, prolactin and phenylethylamine (PEA, the stuff in cocoa and chocolate) rewards, there are powerful negative neurochemical side-effects after orgasm.

“When we first fall in love we become bonded by rising PEA, oxytocin and dopamine levels. When we are sexually aroused by close contact our dopamine level rises further and at the time of orgasm we have a dopamine brainstorm which one researcher compared to the effects of heroin on the brain. Dopamine is active in all addictions, even in people who have forgotten what sex is. Most of this activity is in the limbic system, the oldest part of the brain.

“After orgasm dopamine levels fall sharply with the usual withdrawal symptoms. This reaction tends to be immediate in males and delayed in females. Also prolactin levels rise, and androgen receptors fall after orgasm. Low testosterone is associated with irritability and anger. In sexually-satiated rats it has been shown that serotonin and endorphin levels also rise, and this also decreases dopamine and raises prolactin levels. Oxytocin levels fall after conventional orgasm but remaining in close contact may help to counter this drop and sustain oxytocin levels.”

These neurochemical changes go on for a couple weeks, making us irritable, anxious and depressed if there is no human bonding and touch to raise the oxytocin levels. Will sexbots replace human contact? Not likely.

Woody Allen prophetically and comically expressed the angst of this dilemma with his Orgasmatron and orb in his film Sleeper (1973). Though Allen’s fictional future society was in 2173, seems we have made a quantum leap a mere 2 years away. Who would have known Allen was the next George Orwell?

Sexbots Will Give Us Longevity Orgasm Hank Hyena- H+ Magazine