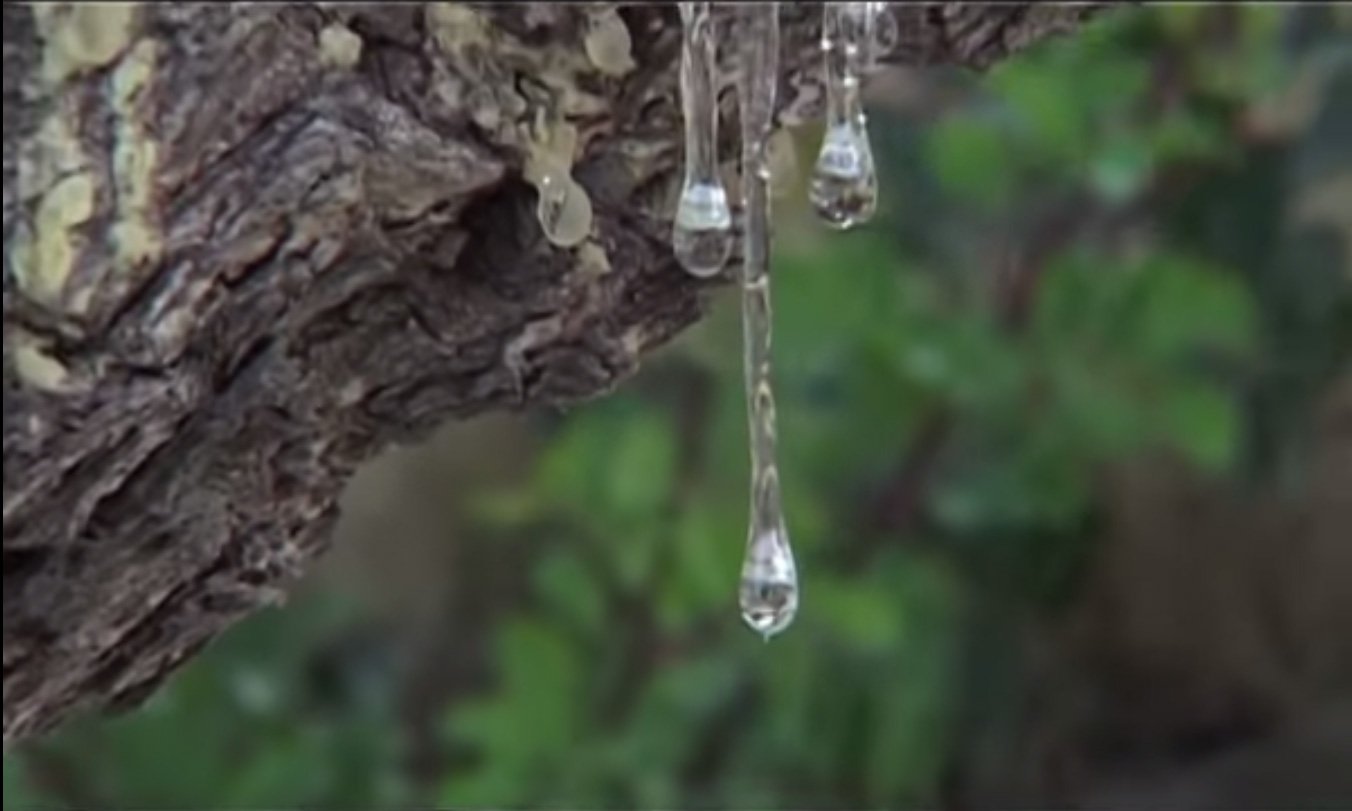 Did you know that the word “masticate” is derived from the Greek word “mastiha?”

Mastiha is a miraculous resin that seeps from the mastic tree (Pistachia Lentiscus var. Chia) only on the Greek Island of Chios in the Eastern Aegean Sea. In 1998, Mastiha was distinguished by the EU as a PDO product (Protected Designation of Origin) acknowledging its medicinal and healing qualities are specific to its cultivation only in the geographical environment of the island of Chios.

The “father of pharmacology” Dioscorides (1st century B.C.) physician and botanist praised the properties of Chios Mastiha. In his book, De Materia Medica, he documents it in treatments for stomach disorders, blood reproduction and even as a tranquilizer. Over the centuries many medical practitioners praised its use on the gastric and intestinal system as well as its antimicrobial, anti-inflammatory, antioxidant action and healing and skin regenerative properties.

The most fascinating research about Mastiha is found in the studies done about its ability to treat and prevent digestive system disorders.

Clinical studies were published in 1984 (Clinical & Experimental Pharmacology & Physiology Magazine), in 1986 (Gastroenterologia Japonica Magazine), in 1986 (Journal of Ethnopharmacology) and most importantly in the New England Journal of Medicine by the University Hospital of Nottingham England. All the studies proved Mastiha’s effectiveness in curing, preventing and alleviating the symptoms of gastric and duodenal ulcer.

In 1998, the study in the New England Journal of Medicine “Mastiha Gum Kills Helicobacter pylori” was ground-breaking news. Helicobacter pylori was discovered to be the cause behind the majority of ulcer cases and Mastiha exterminated (in all the examined samples) the presence of the bacterium when a 60 mg dose was administered.

Even the American Journal of Gastroenterology and the Journal of Chemotherapy confirmed mastiha’s effectiveness against Helicobacter Pylori in 2001.

Though the Chios Mastiha Growers Association has made efforts to revitalize the use of this incredible resin, it isn’t available in many stores around the world. There are only around 11 stores presently in the entire world. New Yorkers are lucky enough to have the one US store located on our Lower East Side. Kalliopi and Artemis Kohas are responsible for bringing this healing treasure to New York City. As they say, “a unique product in one of New York’s unique neighbourhoods.”

Mastiha is traditionally used in a variety of food products and beverages as well as in the classic chewable gum form or resin drops.

The shop is located on 145 Orchard Street between Stanton and Rivington Streets. The store offers Chios Mastiha in a large range of products: from spices, candles, pasta, sweets, shampoos, lotions and creams.

Imagine a 2,500 year old digestive cure from ancient Greece; a timely, natural cure with absolutely no side-effects for our gastronomically overloaded stomachs.