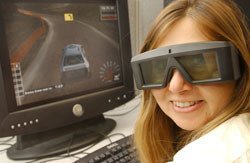 04 Feb The new age of psychotherapy: All you need is a PC and an Avatar

The use of virtual environments for the treatment of specific phobias like the fear of heights, flying, and public speaking has been around for over a decade. Psychotherapists have used different forms of these virtual spaces to safely expose their patients to their phobias in the relatively “safe? and controlled environment of a virtual world.

A recent article in the New York Times (November 22nd, 2010), In Cybertherapy, Avatars Assist With Healing, Benedict Carey gives us a glimpse on just how far this new technology has progressed over the years:

“?advances in artificial intelligence and computer modeling are allowing them to take on a wider array of complex social challenges and to gain insight into how people are affected by interactions with virtual humans ? or by inhabiting avatars of themselves.

Researchers are populating digital worlds with autonomous, virtual humans that can evoke the same tensions as in real-life encounters. People with social anxiety are struck dumb when asked questions by a virtual stranger. Heavy drinkers feel strong urges to order something from a virtual bartender, while gamblers are drawn to sit down and join a group playing on virtual slot machines. And therapists can advise patients at the very moment those sensations are felt.?

VR environments have been used by the military to assist soldiers with post-traumatic stress disorder and to heal burn victims. According to Carey’s article, the Canadian army has invested in virtual-reality research and the United States Army invests $4 million dollars annually to these programs.

Virtual Reality environments like Second Life have been offering Cybertherapy for a few years.

“What we’re really noticing in places like Second Life is the legacy of games, what games can contribute to creativity, and to open-ended thinking, where learning can take place, where therapy can take place,” said Thomas Malaby, a cultural anthropologist at the University of Wisconsin at Milwaukee.

Carey, in the New York Times article also mentions an interesting experiment that took place at the Palo Alto Research Center, where 50 college students entered a virtual environment and acquired a virtual body, an avatar.

According to the article:

“Each student then participated in a negotiation game with a member of the experimental team, who was introduced as another student.

But all the avatars were not created equal. Some were four inches taller than their human counterparts, and others were four inches shorter. The participants didn’t notice this alteration, but those made taller negotiated in the virtual game much more aggressively than those made shorter. A later study led by Dr. Yee found that this effect carried over into face-to-face negotiations after the virtual headsets were removed.

The authors argue that the participants, in effect, psychologically internalized their virtual experience. “What we learn in one body is shared with other bodies we inhabit, whether virtual or physical,? they concluded.

The article also mentioned that this illusion could also extend to transferring the identification to an Avatar or body of the opposite sex, if the cues were strong enough.

“?a team led by Mel Slater, a computer scientist at the University of Barcelona, induced what it calls body-transfer illusion ? showing that men will mentally take on the body of a woman, for instance, if that’s the body it appears they’re walking around in virtually. The experience is especially powerful, Dr. Slater said, when the men feel a touch (on a shoulder, in a recent study) at the same time the avatar is touched.

“You can see the possibilities already,? said Dr. Slater. “For example, you can put someone with a racial bias in the body of a person of another race.?

On the VEPSY (a European-Union funded research project for Telemedicine and Portable Virtual Environments for Clinical Psychology) website there are links for a variety of research projects like those on Second Life. There is also a freeware program called NeuroVR 2.0, which is a cost-free virtual reality platform based on open-source software, that provides the clinical professional with a cost-free VE editor, and an easily modified virtual scene to suit their client’s needs. and a link to a Virtual Therapy portal for panic disorder sufferers, as well as numerous other links to research studies, journals and conferences.

Conquer our fears, heal our wounds, erase racism and know what it feels like to be the opposite sex… a pretty amazing achievement based on a technology that started out as science fiction, an art form and gaming platform.

VESPY Cybertherapy Website and Conference. The main goal of the project is to prove the technical and clinical viability of using portable and shared Virtual Reality systems in clinical psychology.

Freeware: NeuroVR 2.0 is a cost-free virtual reality platform based on open-source software.

The Difference Between Being and Seeing: The Relative Contribution of Self-Perception and Priming to Behavioral Changes via Digital Self-Representation Nick Yee and Jeremy N. Bailenson, Department of Communication, Stanford University