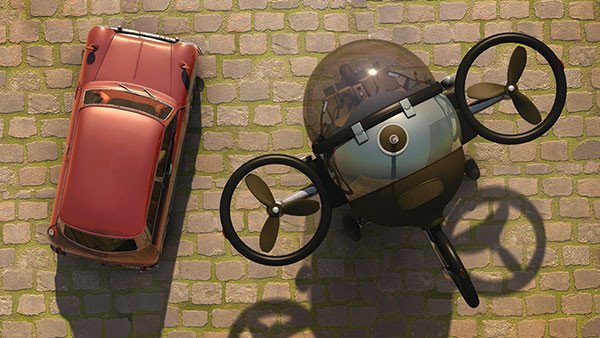 01 Jun The Future Of Commuting: Fly To Work In A Mini Eco-friendly Citycopter

From the ancient Greek Icarus to the Wright brothers our desire to fly has inspired some of our greatest scientific, cultural and political achievements. Now though with our urban population explosion and CO2 emissions contributing to global warming, embracing eco-efficient and “green energy” aerial transport through our cities rather than driving may be our next step.

Fly Citycopter is made from carbon, aluminium and titanium, and is partially covered with solar cells in order to generate energy during the flight. It weighs 1,110 kg and works on a 320-hp electrical engine that is powered by a lithium-ion battery that which allows around 300 miles or 150min of autonomy, 6 hours for full battery recharging and an easily removable battery system for continuous flight. The Fly Citycopter’s maximum speed is around 120 miles per hour and it reaches a maximum altitude of 12,000 ft.

Galvani says, “To fly is an ancient dream that inhabits the human imagination forever, but for many it is the origin of one of their biggest fears, the helicopter is still viewed as an exotic kind of transportation, but it is a very practical and safe means of transportation.”

He goes on mention that what has restricted the development of urban helicopters is its high cost and difficulty to pilot. But, Fly has an aerial navigation system that allows auto take-off, autopilot, auto landing, flight planning and can be easily remotely controlled for short distances with safe obstacle detection.

Galvani mentions that showing the instruments all on one screen will give a cleaner minimalistic visual for the pilot and will change the way we understand and control flight experience.

Of course, what first comes to mind is that even though the Citycopter will make for less travel time and therefore uses less energy and as a result has far lower gas emissions than cars etc., it will create a landing space and air traffic issue. Rob Clymo, editor of MSN Innovation, in a May 14, 2014 article, “Citycopter: the shape of future commuting‘ says: “We’d certainly need lots of regulation, potential owners would need to get a pilot’s license and there would also have to be plenty of landing room in the cities that they visit too. Galvani suggests that the maximum altitude for the Citycopter could be as high as 12,000 feet, which might also present problems for commercial planes and also air traffic controllers.”

Galvani believes that Fly Citycopter is more than just an ideal future means of air transportation and hopes his visual representation will inspire creative people in the transportation industry to make this new reality possible. “The technology is available,” he says, “now it just needs global cooperation.” The Wright brothers were inspired by a toy helicopter (their father brought home in 1878) designed by French aeronautical experimenter Alphonse Pinaud. Let’s see if Eduardo Galvani’s design will inspire future urban planners, governments and transportation authorities.