A study, “Quantifying Trading Behavior in Financial Markets Using Google Trends,” published in Scientific Reports by a team of UK and US researchers, found Google Trends keywords can predict the rise and fall of the Dow Jones Industrial Average. Using historic data from January 2004 to February 2011, researchers analyzed the use of 98 commonly used terms  from the words “unemployment” to “marriage” to “car” to “water” and found that an increase in search volume of particular keywords can be used to make profitable trading strategies.

Previous studies had successfully shown seasonal patterns in searches for mental illness and a link between keyword searches and a country’s GDP. This particular study though shows the relationship between common word search volume and changes in stock market prices.

The researchers choose a set of 98 search terms related to the concept of stock markets, with some terms suggested by the Google Sets service, a tool which identifies semantically related keywords. They explain their strategy based on the term “debt” which performed best in their analysis:

If the term was suddenly searched much less frequently, the investment simulation bought all the stocks of the Dow on the first Monday afterward, then sold all the stocks one week later, essentially betting that the overall market would rise in value.

If a term such as “debt” was suddenly searched much more frequently, the simulation did the opposite: It bought a “short” position in the Dow, selling all its stocks on the first Monday and then buying them all a week later. The concept of a “short” position like this might seem a bit confusing to some, but the basic thing to remember is that it’s the exact opposite of conventionally buying a stock if you have a “short” position, you make money when the stock goes down in price, and lose money when it goes up. So for any given term, the system predicted that more frequent searches meant the market as a whole would decline, and less frequent searched meant it would rise.”

The system simulated how this strategy would have performed for each of 98 words chosen, listed in the chart from most useful at predicting the movement of the markets (debt) to least useful (ring).

Trends to sell on the financial market at lower prices may be preceded by periods of concern so High volume searches for words like “debt”, “stocks”, “portfolio”, “inflation”, “housing”, “revenue” and even the word “cancer” served as effective early-warning signals of the market’s decline. During such periods of concern, people tended to gather more information about the state of the market and words of even deeper psychological fears of sickness.

The studies were done specifically for Dow Jones so the data was drawn for U.S. users for U.S. market trends. But, if you view the charts there were also references to words like: “color”, “restaurant” and “religion” predicting decline and words like “train”, “fun” and “garden” predicting a rise.

In the Smithsonian.com article on the subject, “Google search terms can predict the stock market,” author Joseph Stromberg mentions:

“Even beyond the practical investment strategies that this type of analysis might generate, simply looking through the words provides a striking and oftentimes confusing window into the collective American psyche. It’s seemingly obvious why a sudden increase in the amount of people searching for the word “debt” might signal overall negative feelings about the market, and would likely precede a drop in stock values, and why “fun” might precede increases in the market. But why do searches for the words “color” and “restaurant” predict declines nearly as accurately as “debt”? Why do “labor” and “train” also predict stock market rises?” 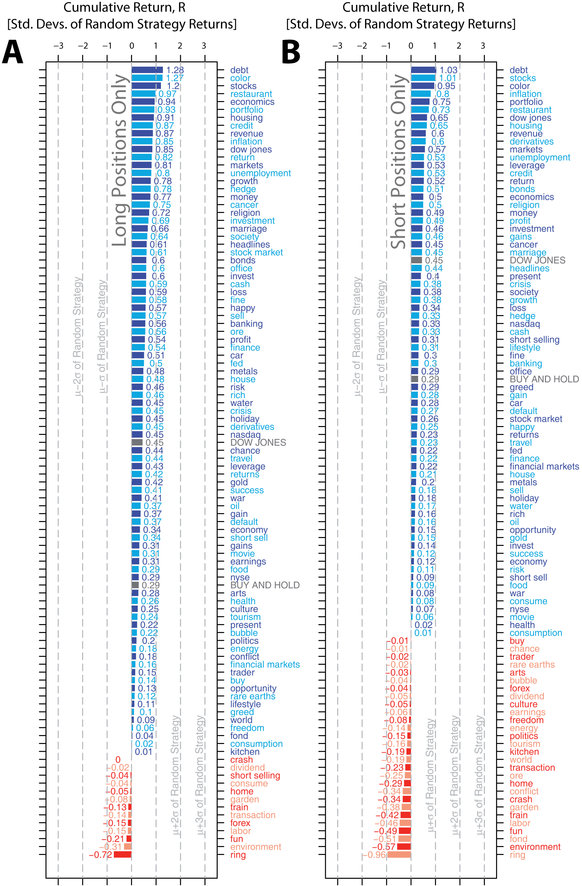 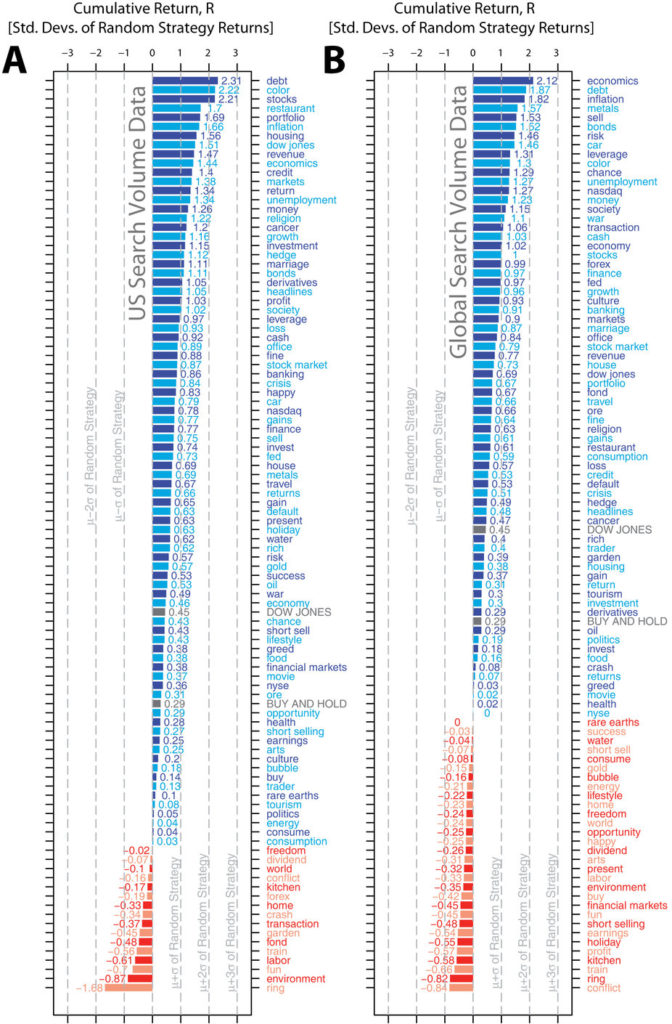 Performances of investment strategies based on search volume data.