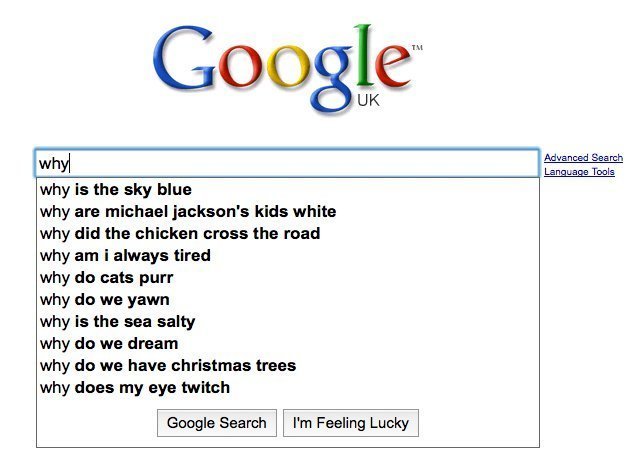 Fernanda Viégas and Martin Wattenberg, two research scientists at IBM’s Visual Communication Lab, have not only invented a new way for people to think and talk about data but have taken the masses of information stored in the Google Suggest tool to reveal the hidden truths that reside in our collective souls with their new project called Web Seer.

In their Op-Ed piece in The New York Times, Answering Machine (December 21, 2009), Viégas and Wattenberg expose the Google Suggest feature as a:

“… labor-saving device — part fortuneteller, part shrink? — (that) has opened a window into our collective soul. With millions of people pouring their hearts into this modern-day confessional, we get a direct, if mysterious, glimpse into the heads of our fellow Web surfers.

A wealth of data can be confusing, but smarter technology can sort it out — whether or not the subject is serious…the two of us …used software we’d designed to create pictures of the results. In these images, the size of the arrows and words reflect how many pages on the Web answer each question.”

Fernanda Viégas and Martin Wattenberg became a team in 2003 on the “history flow? project that depicted the online encyclopedia, Wikipedia in a visualization. Their visualization-based artwork has been exhibited in the Museum of Modern Art in New York, London Institute of Contemporary Arts and the Whitney Museum of American Art.

Using data usually manipulated by business and the military elite, they attempt to complicate and subvert the “data sets” into a visualization that can access our emotions, revealing “more than our eyes can see” beyond numbers into the “realm of words and images.” As they mention, their software code is a “microscope of the abstract world.“

The Visual Communication Lab at IBM called Many Eyes accesses human visual intelligence to find patterns not normally available to us when looking at numbers or words. They live for the magical moment when: “an unwieldy, unyielding data set is transformed into an image on the screen, and suddenly the user can perceive an unexpected pattern.”

Other interesting projects are: “Listen” (2008)  which generates pictograms of the body parts we sing most about based on thousands of songs within specific genres and “Touch” (2008)  which creates a fleshmap of human desire and body parts.

In our complex information age where we are totally immersed in vast quantities of info, from our daily surfing to our dozens or hundreds of e-mails, Twitters and television stations; Viegas and Wattenbergs’, out-of-the-box visualization technologies have brought back the beauty and sensuality of the visual arts.

“One picture is worth ten thousand words,” the old Chinese proverb suggests. Now, Web seer allows us to view, not only a solitary image in the mind of one artist, but a collaborative portrait of our collective mind.