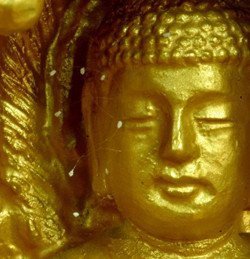 11 Mar Rare phenomenon: Once every 3000 years this flower appears!

A recent Telegraph (March 2010) article, Rare Buddhist flower found under nun’s washing machine reported the appearance of the rare “Udumbara? flower, which according to Buddhist scripture blossoms every 3000 years before the coming of the next Buddha or Tathagata (which by the way can also mean the essential Buddha nature found in everyone.)

A nun, Miao Wei, found the cluster of 18 rare white flowers under a washing machine.

A few years back a Chinese farmer, Mr. Ding, also found a cluster of 38 of these flowers growing on a steel pipe in his garden.Source

A similar phenomenon appeared at Chonggye-sa Temple in Seoul where the flower blossomed on the Buddha’s statue’s forehead. Source

An Urban Legend article, Flowers Growing on Steel? I Beg to Differ suggests that these are possibly lacewing eggs as shown in the figure below.

In this particular case, Miao Wei, who thought at first they were eggs noticed after a few days, they bloomed and had a “fragrant scent?.

The name is used in Buddhist scripture to refer to a mythical tree that is said to bloom only once every 3,000 years, or an exceedingly rare flower. However there is an actual udumbara or udumbara tree, which is the ficus racemosa, a wild fig tree found in the Himalayan foothills. Some sources give ficus glomerata as the name of the species. In English, it is called the cluster-fig tree.

Ostensibly the blossom of this tree is not easy to detect.

Udumbara is also used for a configuration of the eggs laid by the lacewing insect that is used for divinatory purposes. ” Source

The flower and fruit of the ficus racemosa

“The Udumbara flower (ficus racemosa) is a small flower of the Cluster Fig. In Buddhism, it is a metaphor for that which is supernaturally rare. In the summer of 2007, it began blossoming at various places in the world, most notably Taiwan and California.?

Genetically identical to the Bodhi Tree at Sri Mahabodhi temple

The “Bodhi Tree? under which Gautama Buddha attained enlightenment was a large and very old sacred fig tree (ficus religiosa) located in Bihar and may have been the Udumbara tree according to both the Digha Nikaya and Buddhavamsa. Source

“The udumbara flower of the ficus racemosa tree also appears in chapters 2 and 27 of the 3rd century Lotus Sutra, an important Buddhist text. The symbolic nature of the udumbara is used in the Lotus Sutra to compare the unique occurrence of its bloom with the uncommon appearance of the Buddha and its doctrine in the world:

All Buddhas come into the world
But rarely, and are hard to meet;
And when they appear in the world,
It’s hard for them to speak the Dharma.
Throughout countless ages, too,
It’s difficult to hear this Dharma.
And those who can hear this Dharma–
Such people too, are rare,
Like the udumbara flower,
In which all take delight,
Which the gods and humans prize,
For it blooms but once in a long, long time.
So one who hears this Dharma, gives joyful praise,
With even just a single word,
Has thereby made offerings,
To all the Buddhas of the three periods of time.
Such people are extremely rare.
Rarer than the udumbara flower?

Buddha also refers to the Udumbara tree when he describes how a member of any caste system can achieve the same quality of spiritual emancipation.

Buddha says:
“In the same way, great king, in the power that is kindled by persistence and generated by exertion, I say that there is no difference with regard to the release of one and the release of another.” Source

In Warren Burt’s, Some Words in Praise of Non-Verbal Intelligence, he mentions:

“The theme of teaching through silence is one that continues throughout history. In the 5th century BC, so the 9th century AD legend goes, Lord Gautama addressed the assembled throng by holding up a single white flower, and speaking not a word. Only one disciple, Mah? K??yapa, “got it,” and smiled, and Lord Gautama smiled back, entrusting the form of teaching to Mah? K??yapa that concentrated on direct experience rather than rational argument and the like. At a slightly later time in Greece, according to Jung, in the Eleusinian mysteries, a mown ear of grain was silently shown, as a kind of wordless sermon.”

It’s not surprising that a white flower was present during the transmission of the direct experience of the Divine consciousness.

Flowers do always, unceasingly, turn towards the Light.

Flowers Growing on Steel? I Beg to Differ Urbanlegends.com