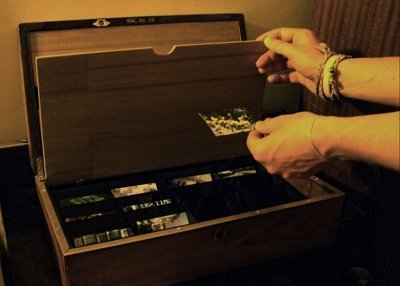 In an April 23, 2014 press release, “A key to enjoying massive online photo files may be giving up some control, researchers say” researchers at Carnegie Mellon University and Microsoft Research Cambridge, UK, present the results of a 14-month study of a new device called Photobox.

Photobox is a Bluetooth-enabled printer housed inside an antique oak chest. Four or five times each month, it makes 2×3-inch prints of an image randomly selected from the user’s Flickr account. Users discover the photos by opening the chest’s lid.

For the study, Photobox randomly prints four or five of those photos at varying intervals each month. Though the study involved a small number of households, the researchers said their findings suggest that, in a world where technology is always on, people sometimes find value in taking it slow.

“We have all these devices — smartphones, touchpads, televisions — that are always competing for our attention,” said Will Odom, a Ph.D. student in Carnegie Mellon’s Human-Computer Interaction Institute who interned at Microsoft Research, Cambridge.

With cellphone cameras and online sites like Flickr, we can take an unlimited number of photos and store them without space constraint. Since these collections are sometimes huge and we don’t physically print out these photos, there isn’t a lot of interaction with our photo memories.

Instead of these images hiding in folders in the cloud, “this device explores the use of serendipity as one approach to delighting people, while also making their images a regular part of their everyday life,” said Richard Banks, principal design manager at Microsoft Research Cambridge.

Their findings will be presented on April 29, 2014 at the CHI Conference on Human Factors in Computing Systems in Toronto.

In the study, some of the users were frustrated with the concept of slow technology in the beginning and wanted to speed up the printing process. But after a period of adjustment, “people tended to like it,” Odom said.

In a household with roommates, for instance, the photos became a subject of discussion. “We were all a little curious … wondering who might be in the next photo,” one roommate remarked. Overall it’s been an interesting experience,” agreed the account holder. “We’d never be sitting around my tiny laptop laughing about my photos like we did.”

The researchers were surprised to find some users were reconsidering their relationships with other technology. One person, for instance, decided to take a break from Facebook after the slower pace of Photobox demonstrated that clicking through life was not necessarily the best way to live.

“By subverting people’s control over technology and designing it to ‘behave’ in a much slower way, we opened them up to thinking about technology in their lives and what it might be doing to their relationships,” Odom said.