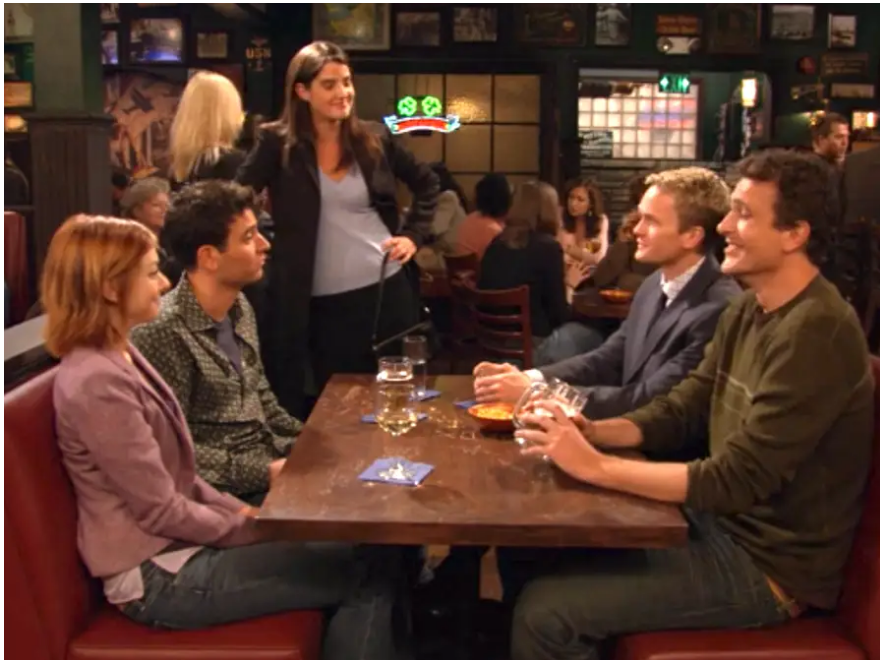 20 Sep “How I Met Your Mother”, Neville Goddard, E-squared and Manifesting Your Desires

A man’s consciousness is all that he thinks and desires and loves, all that he believes is true and consents to.

That is why a change of consciousness is necessary before you can change your outer world.

How I Met Your Mother

Last night I was watching “How I Met Your Mother”. In Season 2, Episode 17 “Arrivederci, Fiero”, there is this scene where Marshall picks Ted up from his parents’ house in Ohio on his way back to college from Minnesota after Christmas break in his Pontiac Fiero. Ted narrates how they got lost on a back road and had to cuddle together to stay warm when a snowstorm hit.

The cincher is when they find out in the morning they were parked in front of a small bed-and-breakfast all along.

You all know I am a real fan of Neville Goddard. So, randomly Googling today I came across a quote:

“Man’s chief delusion is his conviction that there are causes other than his own state of consciousness.”

That quote is from Chapter III “Power of Assumption” from Neville’s book, “The Power of Aware­ness” (1952)

Be ye transformed by the renewing of your mind.

To be transformed, the whole basis of your thoughts must change. But your thoughts cannot change unless you have new ideas, for you think from your ideas. All transformation begins with an intense, burning desire to be transformed. The first step in the “renewing of the mind” is desire. You must want to be different [and intend to be] before you can begin to change yourself. Then you must make your future dream a present fact. You do this by assuming the feeling of your wish fulfilled. By desiring to be other than what you are, you can create an ideal of the person you want to be and assume that you are already that person. If this assumption is persisted in until it becomes your dominant feeling, the attainment of your ideal is inevitable. The ideal you hope to achieve is always ready for an incarnation, but unless you yourself offer it human parentage, it is incapable of birth. Therefore, your attitude should be one in which – having desired to express a higher state -you alone accept the task of incarnating this new and greater value of yourself.”

Further on through Google’s suggestions found that same quote introducing a book called, “E-Squared: Nine Do-It-Yourself Energy Experiments That Prove Your Thoughts Create Your Reality“. Intrigued, I bought the Kindle and skimmed the book.

The author, Pam Grout recounts a story about almost freezing to death:

“On the second night there, I met a handsome former surfer named Stan who convinced me to spend the evening listening to the ocean crashing against the cliffs. We finally fell asleep in one of the massage rooms, huddled together to stay warm. Not that it worked. April winds off the Pacific can be ferocious, and even with our combined body heat we practically froze to death…..

If Stan hadn’t been so cute and I hadn’t been so desperate to get over the jerk who’d tossed me aside like some empty bag of Doritos, I probably would have excused myself and gone back to my insulated sleeping bag. But I stayed until the next morning when the “dawn’s early light” revealed that the whole time there’d been a space heater next to the mat where we’d been huddled. A space heater we could have turned on and used to keep warm!

In a nutshell, that’s what this book is about. There’s a space heater—or rather an invisible energy force—that’s constantly available for our use, and we haven’t bothered to turn it on. Most of us are totally oblivious to the fact the “space heater” even exists. We think of life as a random crapshoot. C’est la vie.

Those of us who do know about the space heater (that is, the energetic field that gives us the ability to shape and design our lives) don’t understand how it works. We’ve heard rumors that praying turns it on, that good works keep it going. But no one seems to know for sure. This guru tells us to chant. The next one suggests meditation. The one from last year insisted we clean up our thoughts and increase our vibrations. So which is it? Is the energy force really that vague and mysterious? And why does it only work sometimes? At best, it’s finicky and fickle, certainly nothing you can bank on.

What I’d like to suggest is that this invisible energy field is 100 percent reliable. It works every time, like a math principle or a law of physics. Two plus two always equals four. Balls dropped off roofs always fall. Your every thought always affects physical reality.”

The book is a very nice light read. Very refreshingly matter of fact. A little Neville, a little “Course in Miracles“, but mostly the author’s own grasp of The Law. Some very cool little fun unique exercises, if you want to lighten things up in your manifestation repertoire:

The exercises in the book are based on these clever principles:

1. The Dude Abides Principle. This is the basic principle, the foundation upon which all the others rest. Basically what it says is, “There is an invisible energy force or field of infinite possibilities.” The experiment could best be described as an ultimatum. You’re going to give the force exactly 48 hours to make its presence known. You’re going to demand a clear, unmistakable sign, something that cannot be written off as coincidence.

2. The Volkswagen Jetta Principle. Remember that new car you bought a few years ago? When you first decided it was the car of your dreams, it seemed like a unique car. You figured you’d be the only one in town to proudly drive one. Well, by the time you read up on it in Consumer Reports, decided on the price you needed to offer, and finally got yourself to the car dealership, you noticed that practically every eighth car was a Volkswagen Jetta or whatever car it was you wanted. And that’s what happens when you begin to think about something—you draw it into your life.

Every thought we have, every judgment we make, impacts the field of potentiality. In fact, reality is nothing but waves of possibility that we have “observed” into form. This principle states, “You impact the field and draw from it according to your beliefs and expectations,” and to prove it we’ll set the following clear intention: “This is what I want to pull out of the field in the next 48 hours.”

3. The Alby Einstein Principle. Even though this principle, “You, too, are a field of energy,” is one of the cornerstone spiritual principles, it actually first came to light in a physics lab. Yes, it was scientists who discovered that, despite all appearances to the contrary, human beings are not matter, but continually moving waves of energy. In fact, you probably noticed the title of this book is a play on Einstein’s famous equation.

This is the only experiment that involves equipment—specially designed, perfectly tuned equipment. Okay, so it’s a metal coat hanger (a specimen of which I’m assuming, unless you’re a complete and total slob, is available in your closet) and a drinking straw, something you can easily score free of charge at any McDonald’s.

4. The Abracadabra Principle. Most people associate the word abracadabra with magicians pulling rabbits out of hats. It’s actually an Aramaic term that translates into English as, “I will create as I speak.” It’s a powerful concept. It’s why Edison often announced the invention of a device before he’d actually invented it. It’s why Jim Carrey wrote himself a check for $10 million long before he ever made a movie.

This principle simply says, “Whatever you focus on expands,” and in the experiment you’ll learn that there’s no such thing as an idle thought and that all of us are way too cavalier and tolerant of our minds’ wandering.

5. The Dear Abby Principle. This principle states: “Your connection to the field provides accurate and unlimited guidance.” By realigning your consciousness, you can access reliable answers to every request you ever make. The reason you don’t know this is because you’ve taught yourself the most unnatural habit of feeling separate, of not being in communion with the FP.

6. The Superhero Principle. In this experiment, governed by the principle “Your thoughts and consciousness impact matter,” you will duplicate an experiment conducted by Dr. Gary Schwartz, a professor at the University of Arizona, which demonstrated that sending intention to plants made them grow faster and reflect more light than their nonintentioned counterparts.

7. The Jenny Craig Principle. Whether you’re a label reader or not, you know the food you eat offers certain vitamins, minerals, and of course, calories. You probably think these nutrients are cut-and-dried, that if the back of the yogurt container says it has 187 calories, then it has 187 calories. What you may not know is that your thoughts about yourself and your food are in a constant dance with your body. And that when you feel guilty about consuming calories, your food picks up a negative vibe that ricochets right back at you. In this experiment, you’ll prove the principle “Your thoughts and consciousness provide the scaffolding for your physical body” by infusing your food with love.

8. The 101 Dalmatians Principle. This all-important spiritual principle states: “You are connected to everything and everyone else in the universe.” Scientists call it nonlocality, and if you watched the cartoon version of 101 Dalmatians, you saw the principle in action. Remember when Cruella De Vil’s evil cohorts were trying to capture the escaped puppies? The old Scottish terrier in the barn where they were hiding barked for help to a basset hound in the next county, who, in turn, barked the message to a dachshund farther along the route. Only in quantum physics, the communication happens instantaneously. The very instant the Scottish terrier knows that the puppies require help, the dachshund, 20 miles away, also knows. Anything that happens to one particle is instantaneously communicated to the other. In this experiment, you’ll send messages to people in other places without the use of e-mail, letters, or loud explosions.

9. The Fish and Loaves Principle. This principle states: “The universe is limitless, abundant, and strangely accommodating.” It will also prove that your fears are pointless and that maybe it’s okay to take a big, deep breath.

Article Name
How I Met Your Mother, Neville Goddard, E-squared and Manifesting Your Desires
Description
A man’s consciousness is all that he thinks and desires and loves, all that he believes is true and consents to. That is why a change of consciousness is necessary before you can change your outer world.
50
SHARES
ShareTweet