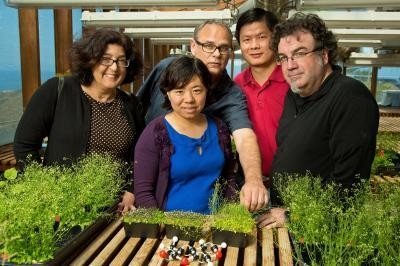 Researchers at the Salk Institute and the University of California, San Diego finally solve a centuries old mystery of how seeds, dormant in the soil know how to push through layers of ash and scorched earth after a forest fire.

In the April’s online edition of the Proceedings of the National Academy of Sciences (PNAS), in the report. Smoke-derived karrikin perception by the ?/?-hydrolase KAI2 from Arabidopsis, scientists answer this fundamental “circle of life” question in plant ecology.

“This is a very important and fundamental process of ecosystem renewal around the planet that we really didn’t understand,” says co-senior investigator Joseph P. Noel, professor and director of Salk’s Jack H. Skirball Center for Chemical Biology and Proteomics. “Now we know the molecular triggers for how it occurs.”

Noel’s co-senior investigator on the project, Joanne Chory, professor and director of Salk’s Plant Molecular and Cellular Biology Laboratory, says the team found the molecular “wake-up call” for burned forests. “What we discovered,” she says, “is how a dying plant generates a chemical message for the next generation, telling dormant seeds it’s time to sprout.”

A half century ago forest fires were suppressed until it was discovered that many minerals and chemicals were absent from the soil which eventually would destroy a forest’s ecosystem. Since then controlled burns were initiated by park services to restore the balance.

Previous studies like, Karrikins Discovered in Smoke Trigger Arabidopsis Seed Germination by a Mechanism Requiring Gibberellic Acid Synthesis and Light (2009), discovered that special chemicals known as karrikins are created as trees and shrubs burn during a forest fire and remain in the soil after the fire, ensuring the forest will regenerate.

The Salk scientists’ uncovered exactly how a plant protein known as KAI2 binds to karrikins in the dormant seeds and stimulates new plant growth. The research team found that when karrikin binds to KAI2 protein it causes a change in its shape which sends a new signal to other proteins in the seed which initiate germination at the right place and time after a wildfire.

The chemical structures the team solved revealed all the molecular contacts between karrikin and KAI2, according to Salk research associate Yongxia Guo, a structural enzymologist and one of the study’s lead investigators. “But, more than that,” Gou says, “we also now know that when karrikin binds to the KAI2 protein it causes a change in its shape.”

The studies’ other lead investigator, Salk research associate and plant geneticist Zuyu Zheng, says this karrikin-induced shape change may send a new signal to other proteins in the seeds. “These other protein players,” he says, “together with karrikin and KAI2, generate the signal causing seed germination at the right place and time after a wildfire.”

Noel says: “KAI2 likely evolved when plant ecosystems started to flourish on the terrestrial earth and fire became a very important part of ecosystems to free up nutrients locked up in dying and dead plants.”

More research will follow on how exactly this shape change activates the germination but this first step was a breakthrough in understanding how forests renew themselves.

Karrikins: A new family of plant growth regulators in smoke