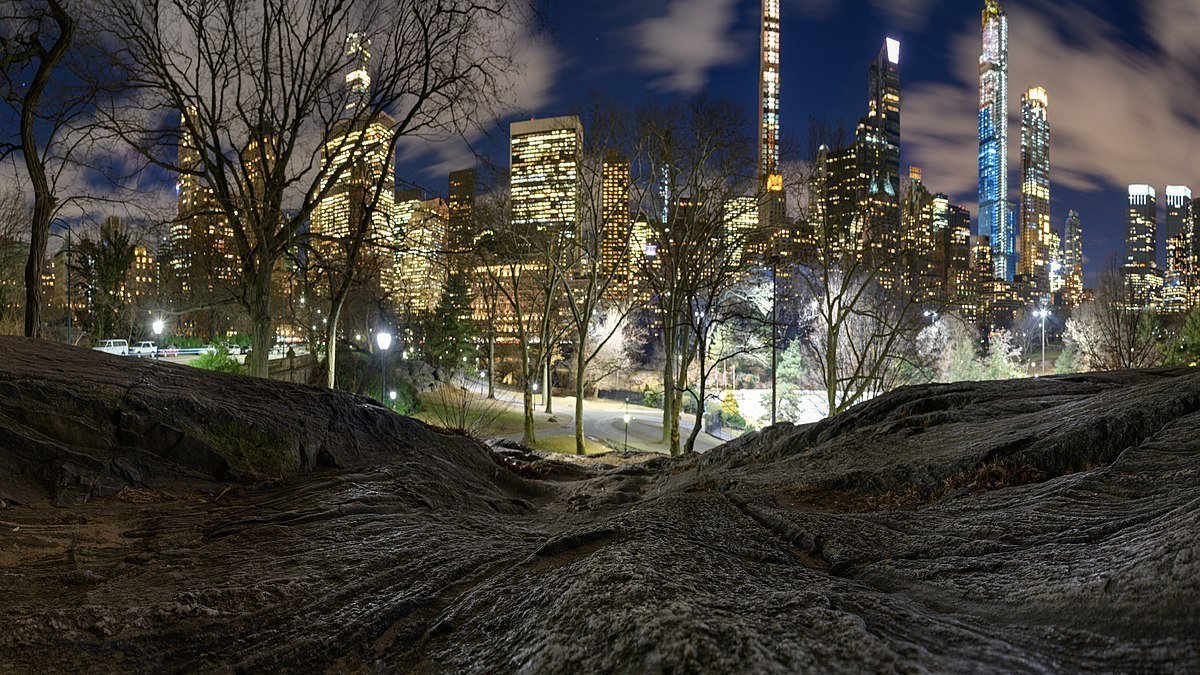 Could there possibly be a natural piezoelectric effect under New York City?

Under Manhattan Island is a 542 million year old Paleozoic crystalline rock formation. The garnet, silliminate and quartz under New York City are all around a 7 on the Moh’s scale (imagine diamonds are a 10). According to Duke Geological Lab:

The underlying bedrock formation on Manhattan Island is called the Manhattan Schist which consists of:

“very massive rusty to sometimes maroon-weathering, medium to coarse-textured, biotite-muscovite-plagioclase-quartz-garnet-kyanite-sillimanite gneiss and, to a lesser degree, schist. The presence of kyanite, sillimanite, quartz and magnetite layers and lenses up to 10 cm thick, cm- to m-scale layers of blackish amphibolite, and scarce quartzose granofels. A result of its durability to weathering is due to the lack of layering and presence of wear-resistant garnet, kyanite, and sillimanite.” 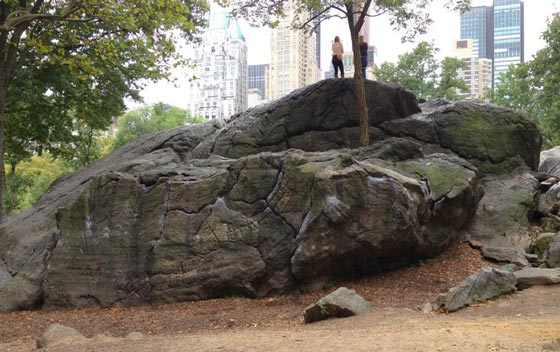 Silliminite is a silicate. Interesting enough, one of the most commonly used materials for Fiber Optic Technology are silica glass fibers as well as quartz and magnetite.

Silica is normally used because it has one of the strongest geometric structures because “the tiny silica atom nestles perfectly between four large oxygens, covalently bonded to each.” Silica made optical fibers also have a wide wavelength range, high mechanical strength and are chemically stable.

So, the most common materials used in fiber optics lie right under NYC‘s concrete sidewalks and tarred Avenues.

Here is one of the clearest explanations on the web of fiber optic technology and a chance for many of us who don’t understand how cable connections and optical technology works to get an idea or how it differs from electrical copper wire system (it’s short so stay with it):

“fiber-optics is steadily replacing copper wire as an appropriate means of communication signal transmission. They span the long distances between local phone systems as well as providing the backbone for many network systems. Other system users include cable television services, university campuses, office buildings, industrial plants, and electric utility companies.

Think of a fiber cable in terms of very long cardboard roll (from the inside roll of paper towel) that is coated with a mirror on the inside.

If you shine a flashlight in one end you can see light come out at the far end – even if it’s been bent around a corner.

Light pulses move easily down the fiber-optic line because of a principle known as total internal reflection.

When this principle is applied to the construction of the fiber-optic strand, it is possible to transmit information down fiber lines in the form of light pulses. The core must a very clear and pure material for the light or in most cases near infrared light (850nm, 1300nm and 1500nm). The core can be Plastic (used for very short distances) but most are made from glass. Glass optical fibers are almost always made from pure silica.”

Even though these minerals are not fashioned into high tech optical fibers, their crystalline structures are intact under Manhattan’s concrete streets.

The tutorial mentioned that the information translated into pulsing lights is initially sent through a transmitter with coded electronic pulse information.

Since we are playing around with the idea that Manhattan lies on top of a massive network of fiber optical crystalline cables formed naturally by 542 million year old Paleozoic rock, for this playful theory to continue we need an electronic pulse that will later be translated into light pulses.

So where would the electricity creating the electronic pulse for the coded information come from?

Could it be a piezoelectric effect on the quartz and silica layers on schist in the bedrock?

Another short tutorial on crystals and the piezoelectric effect:

“Piezoelectric crystals are used in electronic clocks and watches to maintain the time and provide the alarm noise. Quartz clocks are also used to organize the flow of data in computers. Discs of piezoelectric material are also used to create thin speakers that fit inside wristwatches.”

Crystals used for piezoelectric purposes are usually cut so that the resonance frequency is stable and well-defined.

Skeptics generally find fault with the theory that crystals have healing qualities and transmit healing frequencies to the human body even though 5,000 year old Ayurveda, Tibetan medicine and the Dalai Lama,  American Indians and Egyptians all purported crystals’ ability to transmit healing frequencies. In any case, the skeptics argument is that in order for piezoelectric effect to take place, the crystal must be cut in a certain way for the transmission of positive and negative charges. Usually they are cut into thin layers and slices. Skeptics say, the crystals used by crystal healers are neither cut nor compressed in any way to create this piezoelectric effect.

But, under New York City, this piezoelectric effect might be happening naturally. 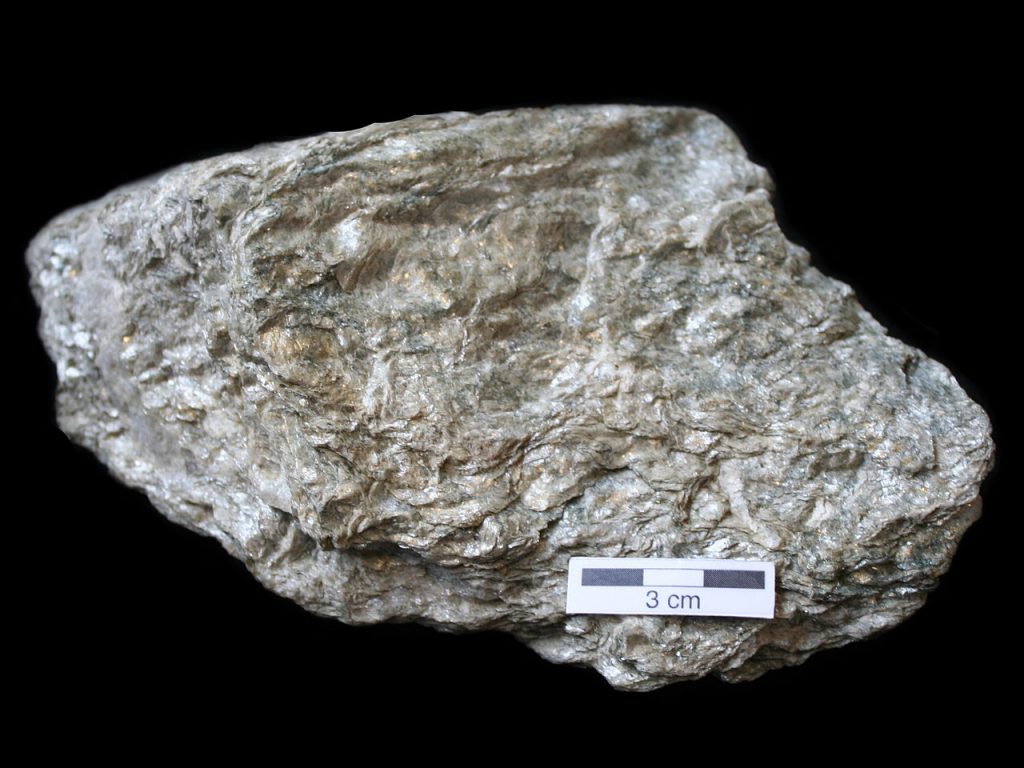 What is interesting is that NYC’s bedrock is mostly Schist.

“The individual mineral grains in schist, drawn out into flaky scales by heat and pressure, can be seen by the naked eye. Schist is characteristically foliated, meaning the individual mineral grains split off easily into flakes or slabs. The word schist is derived from the Greek word “to split”, which is a reference to the ease with which schist’s can be split along the plane in which the platy minerals lie.”

And what could cause the pressure on the crystal lattice?

Surprisingly there are fault lines that run through Manhattan Island: 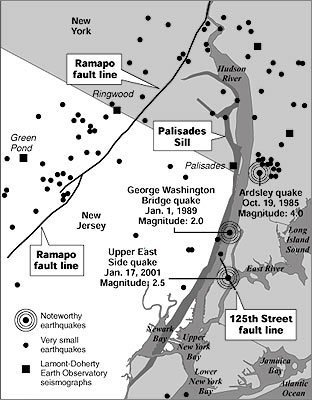 The Ramapo fault [that] runs 70 miles northeast from Morris County, through Ramsey and Suffern and the Hudson Highlands, to Bear Mountain, N.Y. It follows the Ramapo River through the Ramapo Mountains and is actually a “braid of faults,” or a system of cracks.

What’s left is the code.

What possible code could be transmitted across these naturally occurring fiber optic cables?

One possibility could simply be info in the Earth’s Electromagnetic Fields:

“The earth has its own electromagnetic fields, but because mankind has evolved over thousands of years in these fields, he is not normally adversely affected by them. In fact, the Schumann Waves, which are pulsations of energy between the core of the earth and the ionosphere, are essential to life, and form a basis for the “timekeeping” of biological systems – it has recently been shown that even each cell-division is timed according to these pulses. When the first astronauts went up into space, they suffered disorientation and malaise caused by the lack of Schumann Waves. Since then all manned spacecraft have had artificial Schumann Wave generators built into them.”

Other possibilities can be explored through “field and string” theory. But, we have enough tutorials for one article.

Interesting to contemplate that one possibly far-fetched but not totally improbable idea is that New York in particular became the “epicenter of communication” it is today because of this naturally occurring rich latticework of crystalline rock. Crystals naturally cut into perfect sheets lined up and a piezoelectric effect caused by fault lines and cracks through Manhattan Island transmitting a super amplification of the code within “the field” matrix.

Physics & Electromagnetism: What Are Fiber Optics?