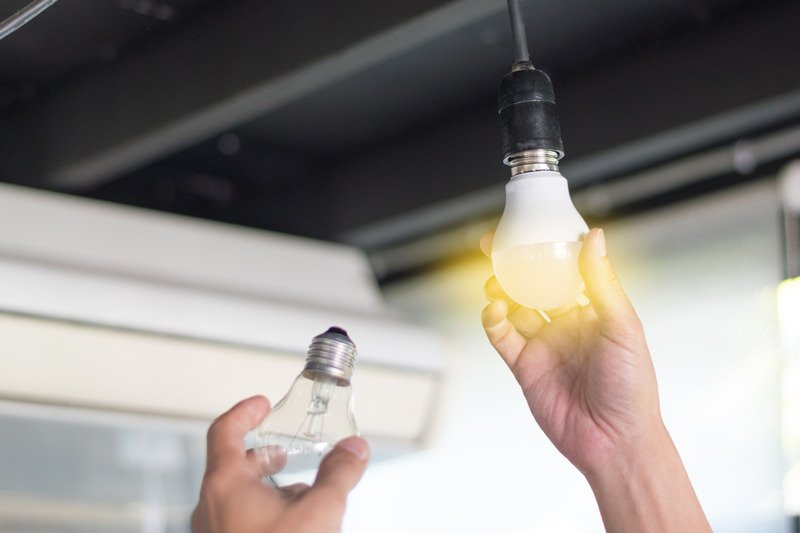 “CFLs produce light differently than incandescent bulbs. In an incandescent, electric current runs through a wire filament and heats the filament until it starts to glow. In a CFL, an electric current is driven through a tube containing argon and a small amount of mercury vapor. This generates invisible ultraviolet light that excites a fluorescent coating (called phosphor) on the inside of the tube, which then emits visible light.”

Mercury is a very toxic substance especially to fetuses and children; that is why it has been banned from thermometers and thermostats. The Environmental Protection Agency even has guidelines to how much canned tuna we can eat a month because of the mercury contamination.

So why put it in our new energy-saving light bulbs?

It appears no other element proved as efficient as mercury to emit a strong enough light and still use less energy than incandescent light bulbs.

But, after these toxic mercury-laden light bulbs are used, where do they go?  Out in the trash or do they follow the recommended procedures for disposal?  Most likely tons of these light bulbs end up in our landfills.

“Most mercury vapor inside fluorescent light bulbs becomes bound to the inside of the light bulb as it is used. EPA estimates that the rest of the mercury within a CFL – about 11 percent – is released into air or water when it is sent to a landfill, assuming the light bulb is broken.”

Now, the government knows about this but their argument is that energy-efficient light bulbs decrease the use of coal-fired electrical power (CFLs use 75% less energy than incandescent light bulbs):

“EPA estimates the U.S. is responsible for the release of 103 metric tons of mercury emissions each year. More than half of these emissions come from coal-fired electrical power. Mercury released into the air is the main way that mercury gets into water and bio-accumulates in fish. Eating fish contaminated with mercury is the main way for humans to be exposed.”

Their other argument is that the mercury in CFLs is minimal, even when broken.

But look at the guidelines the EPA has published about what to do if one of these bulbs breaks in your home:

What to Do if a Fluorescent Light Bulb Breaks

1.    Open a window and leave the room (restrict access) for at least 15 minutes.

2.    Remove all materials you can without using a vacuum cleaner.

3.    Place all cleanup materials in a plastic bag and seal it.

4.    The first time you vacuum the area where the bulb was broken, remove the vacuum bag once done cleaning the area (or empty and wipe the canister) and put the bag and/or vacuum debris, as well as the cleaning materials, in two sealed plastic bags in the outdoor trash or protected outdoor location for normal disposal.

“Each bulb contains an average of 5 milligrams of mercury, “which is just enough to cover a ballpoint pen tip,” says Leslie, associate director of the Lighting Research Center at Rensselaer. “Though it’s nothing to laugh at, unless you wipe up mercury [without gloves] and then lick your hand, you’re probably going to be okay.”

Okay, so cleaning up a broken CFL is the equivalent of approaching a hazardous waste site but it’s less than our dental fillings and a can of tuna and only throws .12 metric tons of mercury into our landfills a year all of which seeps into our water supply. Hmm.

What about UV radiation?

According to the FDA:

What is the wavelength range of the light radiation that is emitted by CFLs?

“Since CFLs are designed to provide general illumination, the majority of the light emitted by CFLs is localized to the visible region of the spectrum (approximately 400-700 nm in wavelength). In addition, typical CFLs emit a small amount of UVB (280-315 nm), UVA (315-400 nm) and infrared (> 700 nm) radiation.”

How close can we safely get to an operating CFL?

“Unless you are one of the few individuals who have a medical condition (such as some forms of Lupus) that makes you particularly sensitive to either UV or even visible light, you should be able to use these lamps at the same distance as you would use traditional incandescent lamps. However, a recent study from the United Kingdom Health Protection Agency has found that there are measurable levels of UV from single envelope CFLs when used at distances closer than 1 foot. As a precaution, it is recommended that these types of CFLs not be used at distances closer than 1 foot, for more than one hour per day.”

Shouldn’t there be a warning for people with Lupus and special clean-up instructions on the box of compact fluorescent light bulbs for pregnant women and children?

Finally, CFLs, like all electronic devices emit electromagnetic fields which are known to be harmful to our bodies.  The World Health Organization has been investigating this for a long time:

“For some time a number of individuals have reported a variety of health problems that they relate to exposure to EMF. While some individuals report mild symptoms and react by avoiding the fields as best they can, others are so severely affected that they cease work and change their entire lifestyle. This reputed sensitivity to EMF has been generally termed “electromagnetic hypersensitivity” or EHS.”

What happens to our bodies when exposed to low-frequency electric fields?

According to the WHO:

Low-frequency magnetic fields induce circulating currents within the human body. The strength of these currents depends on the intensity of the outside magnetic field. If sufficiently large, these currents could cause stimulation of nerves and muscles or affect other biological processes.”

The WHO goes on to say that if these magnetic frequencies get high enough they start to heat up and cook the tissues.

CFLs don’t give off enough EMFs to cook our tissues, but they are still investigating the effects of long-term low-frequency exposure.

For those who are into “alternative healing” and are aware of and sensitive to the electromagnetic field around our bodies and hearts, EMFs have been known to compromise the integrity of our etheric template or energy field and as a result, disturb the entire functioning of not only our physical bodies but our ability to access knowledge in our energetic design.

In any case, whether approached scientifically or alternatively, our bodies can handle quite a lot of toxic and electromagnetic pollution.  Even people with EHS (electromagnetic hypersensitivity) have been cured by either strengthening their immune systems, lowering their general exposure to EMFs and realigning their energy fields with alternative techniques and/or devices that neutralize the magnetic frequencies around them.

The best advice for maintaining a strong magnetic field around your body is lowering stress, having a good attitude and a strong immune system through a healthy diet. Those EMFs (if they haven’t already compromised your energy field) will just slide right out of your body and ground in the Earth below your feet.

So, are there any alternatives?

Surprisingly, the U.S. Department of Energy (DOE) is developing a strategy to accelerate the use of LEDs as our future lighting source.

LEDs differ from traditional light sources in the way they produce light. In an incandescent lamp, a tungsten filament is heated by electric current until it glows or emits light. In a fluorescent lamp, an electric arc excites mercury atoms, which emit ultraviolet (UV) radiation. After striking the phosphor coating on the inside of glass tubes, the UV radiation is converted and emitted as visible light.”

A LED, in contrast, is a semiconductor diode. It consists of a chip of semiconducting material treated to create a structure called a p-n (positive-negative) junction. When connected to a power source, current flows from the p-side or anode to the n-side, or cathode, but not in the reverse direction. Charge-carriers (electrons and electron holes) flow into the junction from electrodes. When an electron meets a hole, it falls into a lower energy level, and releases energy in the form of a photon (light).”

LEDs are still a bit expensive and the light only goes in the direction the bulb is pointed, but hopefully, this technology will develop quickly and phase-out the use of the toxic CFLs and energy-hogging incandescents.

And finally, a tidbit of food for future thought from the Dark-Side of CFLs:

“An International Association for Energy-Efficient Lighting (IAEEL) study conducted in Denmark, explored some carbon footprint factors, but not all, showing it took 1.8 Kwh of electricity to assemble a CFL compared to 0.11 Kwh to assemble an incandescent bulb.  That means it took 16 times more energy to produce a CFL. The study did not include the fact that a CFL is much heavier and is more dangerous to handle, and will thus cost more to package, to ship, and to sell.”

Are CFLs going to end up like our supposedly energy-efficient Hybrids and cost more, in the end, to produce and ship than the energy they save?

The Dark Side of CFLs Walt McGinnis