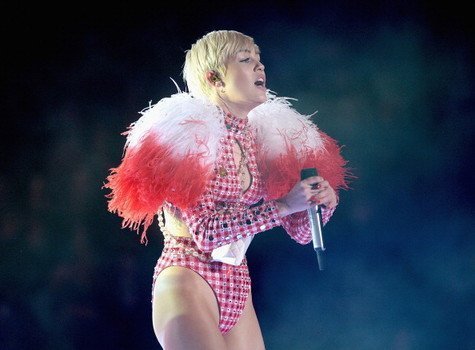 Dolly Parton in a recent interview on April 20, 2014, said her goddaughter Miley Cyrus told her “I need to murder Hannah Montana in order for people to accept who I really am.?

And though Parton admitted to being worried about the public’s reaction to her goddaughter’s radical makeover and terrified people would “crucify? her for it, there are obvious archetypal and mythological patterns playing out here.

Besides the endless media coverage, parodies and criticism of Miley Cyrus’ out-stretched tongue, there are also a few very far-out articles online comparing Miley Cyrus to the Hindu goddess Kali. Most of these articles are slanted toward insinuating she has passed to the “dark side,? demon worship or being “handled? by Hollywood Illuminati forces and some more sober concluding this all might simply be marketing schtick.

While perusing sources on the symbolism of the goddess Kali, there seem to be just as many interpretations of Kali (whose tongue also hangs out), as there are theories as to why Miley Cyrus sticks out hers.

Good old Wikipedia says, Kali is the goddess of “time and change,? “the redeemer of the universe,? “the mother goddess,? “the wife of Lord Shiva? or the dark side of a more mellow goddess, Durga. The article goes on to quote that Kali while destroying a whole bunch of demons in battle got a bit carried away and intoxicated in her victory dance and her husband Shiva had to stop the madness by lying down under her until she realized she was stomping on her man and bit her tongue in shame.

After Googling “biting tongue in shame,? an interesting passage on page 151 in a book by Laura Amazzone, “Goddess Durga and Sacred Female Power,” states:

“The sexual significance of the Goddess’ out-stretched tongue has been inverted in more conservative religious circles who claim that Kali’s tongue represents Her lajja (shame). This is a very curious explanation for why images show Kali with an out-stretched tongue. Sticking out one’s tongue in the West has more to do with warding off people or energies we find distasteful. Or in a less prominent way is used to make sexual advances or to lure our desired partner into our arms and bed. I have never witnessed shame being expressed by someone sticking out their tongue. Disgust yes, but not shame.”

The author goes on to say that Kali awakens us to our inherent nature through excruciating means, in order to restore our lost and repressed female natures.

“In general Kali is feared by those who in all likelihood suffer from a deeply ingrained fear of female sexual power. Female repression includes the many ways we are not allowed to speak our truth. The tongue is the instrument of the voice and therefore power.“

“When women are not able to voice our feelings, concerns, expectations and experiences, the repressed energies can perhaps become internalized as shame. But I highly doubt any woman would protrude her tongue to express shame. Perhaps Kali is sticking Her tongue out at all those who have disdained and tried to control Her.?

Without going overboard with New Age, psychological or feminist clich?s, there is one more interpretation of Kali from a text “Devi Mahatmya,” of the 5th – 6th century AD that is more concise.

Essentially, Kali was born from the brow of nice goddess Durga when she was battling very heavy duty evil forces.

Durga made Kali destroy this crazy demon Rakta-bija aka “blood-seed? who had this magical ability to make a clone of himself from every drop of his blood that fell to the ground. Durga and her warrior buddies the Matrikas were making a mess of the situation because every time they wounded Rakta-bija the blood dripping from his wounds just made more copies of himself.

Kali spreads her tongue across the battlefield and swallows all the demons and sucks out all of Rakta-bija’s blood until he is dried out and dead. She again got carried away and Shiva had to stop her and she stuck out her tongue “in astonishment? (not shame this time).

Going deeper some texts say Kali teases and mocks her devotees ? “she sees through their social facade and knows the dark desires they try so hard to deny or suppress.? She provokes them to delve into their unconsciousness and confront all those memories they shy away from.

It makes a lot more sense that Miley Cyrus might be consciously or unconsciously sticking her tongue out to all those who tried to control her or showed her disdain ?paparazzi et al. (see Barbara Walters and Ellen DeGeneres interviews).

It also makes a lot more sense she is expressing an “awakening? sexual power as she moves into adult womanhood.

So next time she sticks out her tongue, we may look with a more compassionate glance, as she lives out her archetypal hero’s journey.

As American mythologist, writer and lecturer, Joseph Campbell informs us:

“The hero begins in the ordinary world, and receives a call to enter an unknown world of strange powers, faces tasks and trials, and if the hero survives, may achieve a great gift that may be used to improve the world.?

And for those who mock those who play out these archetypes for us in public; here’s a final quote from Campbell:

Watch the short art film “Miley Cyrus: Tongue Tied,? which was made by multi-media artist Quentin Jones, and was posted online by Nowness.