Our digital technology that with such ease brings us together, with instantaneous messages and almost “as if you were in the room” video, has also introduced us to a new type of emptiness in love relationships; that peculiar but very tactile hollow feeling you get after sharing a long-distance Skype conversation with a loved one, or an intimate chat.

There is no human that doesn’t long for some physical interaction with people they love.

A couple decades ago, when a loved one was far away, we wrote letters. Letters we held in our hand, our eyes viewed words written out in our loved ones distinctive handwriting. Smells of paper and smears of ink; it was something you could gaze at, fondle and contemplate. A text message, an email or a Tweet on a hard miniscule cell phone screen or lit by the glare of a powered-on laptop really doesn’t “feel” intimate, soft, warm, like love should.

Researchers at Newcastle University in a report featured in the current edition of the International Journal of Human-Computer Studies, Lovers’ Box: Designing for Reflection within Romantic Relationships by Anja Thieme, Dr Jayne Wallace, James Thomas, Ko Le Chen, Prof Nicole Krämer, and Prof Patrick Olivier attempt to bring some of this “tactile? sense and atmosphere for “reflection” back into our digital communications. 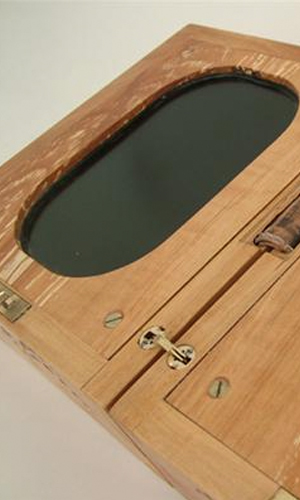 They have created digital ‘Lovers’ Boxes‘ that draw on the aesthetics of traditional wooden jewellery boxes, but actually contain the latest technology to enable couples to record romantic messages for each other.

The initial boxes they designed for couples to trial are made from four different woods (cherry, beech, apple and walnut).

Each box consists of two halves connected by brass hinges, decorated with ornate carvings, with an antique keyhole at the front.

A computer with an integrated RFID reader is hidden inside the box. Other than the screen itself, all visible trappings of digital technology are hidden from view.

Once unlocked, the box opens in a book-like manner, and a screen becomes visible. A wooden pass?-partout with rounded edges frames the screen to counter the usual connotations of a digital display.

When placed within the box, the RFID tag in the key fob triggers a video message stored within. To avoid evoking the sense of a wooden laptop-like device, the videos created by participants are not played in a typical 16:9 landscape format on the screen, but in a portrait orientation.

“The aesthetic appeal of these objects, with the mix of the antique wooden box that has to be unlocked with a physical key is really important in terms of keeping the personal messages between partners private and treasured,” said Anja Thieme, the lead researcher on the project.

The Lovers’ Box has been described as akin to ‘an interactive storybook or jewellery box’, which the participants chose to treat carefully and stow away like a precious family heirloom. This distinguishes it from more traditional and function-orientated media such as mobile phones or laptops.

The research findings showed that the creation, exchange and display of personal messages embedded in the box served as both mirrors and sources for reflection within their relationships.

Participants perceived their box as a keepsake or digital storybook of their meaningful experiences, and looked upon the exchange as an enjoyable shared hobby with their partner. The video content was also regarded as a way of providing a snapshot into their minds and thoughts.

“The process of reflecting on what content to present, of putting effort into the creation of the video and handing the box over to their beloved was perceived as giving a gift of high personal significance,” said Ms Thieme. “In this sense, the interaction with the box created space for partners to display mutual social and emotional support and to feel valued and loved.

“This project builds on a strand of research developed in the Digital Interaction group at Culture Lab in recent years into ways of making emotionally meaningful forms of digital technologies. The Lovers’ Boxes clearly illustrate the potential for a new ‘breed’ of digital artefacts which have the potential to enrich our personal and emotional lives.”