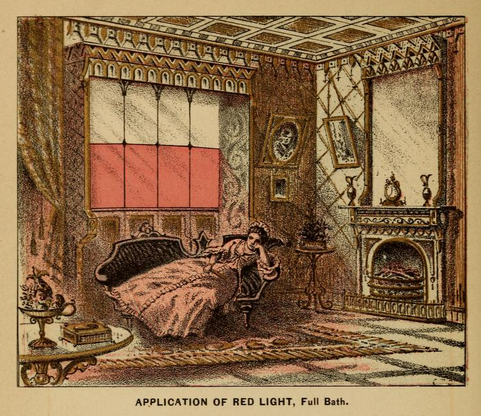 Dr. Seth Pancoast, M.D., of Philadelphia, was a professor of medicine, mystic, and occultist. He was one of the founding members of the Theosophical Society, a religious and philosophical movement that was popular in the 19th century, which proposed the existence of an ancient and secret wisdom that underlies the world’s religions and that can be known through spiritual intuition and study.

He was a professor of anatomy in a “female college” in 1853 and later served as a professor of “Microscopic Anatomy and Physiology” at the Institute of Medicine at Penn Medical University in Philadelphia. After five years, he entered private practice, and was given emeritus status.

He wrote medical books and articles, including one on the therapeutic qualities of the light spectrum. He also had a keen interest in the occult and had a personal library described as “the finest private collection of works on the occult sciences in the United States.”

According to Theosophical historian Josephine Ransom, he was a “theistic mystic and a great alchemist” and “remained a member (of the Theosophical Society) till he passed away.”

He was present at the meeting of September 7, 1875, that eventually led to the forming of the Theosophical Society and was elected as Vice-President on the meeting held on October 30, previous to the inaugural one on November 17.

He had a good relationship with H. P. B. (Helena Petrovna Blavatsky) and she spoke with great respect of his erudition. However, when it came to putting theory to the test by evoking the unseen elemental races which guard the threshold of knowledge, he confessed he lacked courage, though H.P.B. frequently offered to assist in the ceremonies and, if necessary, face the worst of the phantoms alone. Under the names of “Lex” and “Lex et Lux” he wrote for the Spiritualistic papers on kabalistic and other matters. He passed away on December 16, 1889 of heart disease and was buried in the Darby Friends Cemetery in Philadelphia.

The ancients were well aware of the healing properties of light and applied it in their medical practices. They knew that light has both subjective and objective properties, and they had knowledge of light that we have not yet discovered. They used light in various forms such as sunlight, lamps, and focalized light in wine and oil to cure diseases. They also employed the use of Sympathetic and Antipathetic treatment methods, and believed that light could be used to restore equilibrium in the body, which is essential for health. They understood that light is a powerful tool for healing and it is important to apply this knowledge in a practical way to banish disease from the human organism.

The ancients applied light in their medical practices by using it to treat diseases in two ways: sympathetically and antipathetically. For example, they would use light to treat a disease sympathetically by sending “recruits” to a weaker force in the body to help it recover its powers. They would also use light antipathetically by administering a medicine that produces similar symptoms as the disease, thus attacking the disease directly. Additionally, they would use light in the form of “Fluid Gold” and “Potable Gold” by focalizing and fixing it in wine and oil to administer as medicine.

The book provides examples of how the ancients viewed light as a healing agent, and how the author and their team conducted experiments to understand the properties of light and its potential for healing. He found that the Actinic or Chemical ray was not the sole actor in producing molecular changes, and that the Calorific ray, or the Red ray, is the creator of new forms by imparting new affinitive attraction to the molecules or atoms prepared for it. He also mentions that one ray, or even six rays, can not carry out the most simple operations in Nature, and that Light must work as one, or rather it must use its forces in equilibrium. 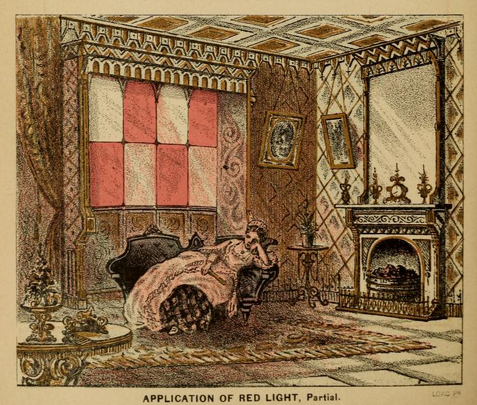 Pancoast describes his experimentation with the use of light as a remedy for disease. He proposes two methods of applying light, an indirect method by combining its virtues with medicines, and a direct method by the application in “Sun-bath.” He also mentions how to prepare certain positive medicines exclusively under Red, and certain negative medicines exclusively under Blue, Light, and claims he found these medicines to act with special effectiveness in harmony with the rays applied externally. He also mentions the use of colored glass to filter and direct specific color-rays to the body for therapeutic purposes.

“As soon as a Man feels himself becoming, on the one hand, “Nervous” (i. e., unduly excitable, irritable, “touchy”), or, on the other, subject to the “Blues” (i. e. low-spirited and apprehensive of evil), careless, indifferent to any subject that should interest him, let him pause and examine himself — he is in peril and must determine its source and end, and see how the threatened evil is to be averted.”

He also discusses the use of light therapy, specifically the use of red and blue light, as a form of treatment for various conditions related to the nervous system. He explains that the red light has the ability to “awaken all the dormant Vitality in the Nervous System” and can be used to increase the activity of the nervous system in cases where disease has reduced the vitality below the health standard. On the other hand, the blue light is described as the “source of death and decay” and is used to reduce nervous excitement and act as a sedative. The author notes that care must be taken when using these light therapies, as excessive use can lead to dangerous fevers or other disorders. He also suggest starting with moderate doses and adjusting the amount and duration of the light therapy based on the individual case.

Seth Pancoast bringing out his Blue and Red Light, or, Light and its Rays as Medicine (1877), which echoed Pleasonton’s radical design, the pages of blue printed words enclosed within a red border.

The influence of the blue ray of the sunlight and of the blue color of the sky, in developing animal and vegetable life; in arresting disease and in restoring health in acute and chronic disorders to human and domestic animals, by A. J. Pleasonton; 1877; Philadelphia.

Originally published in 1876, this book is remarkable not only for being the first major work in contemporary chromotherapy, but also for its unique appearance. True to the ideas held within — that blue light is bearer of unique and special properties — the book is entirely printed with blue ink on blue paper. Its author, a retired US Civil War general named Augustus James Pleasonton, proposed that isolating blue wavelengths from the sun could benefit the growth of both flora and fauna, and also help to eradicate disease in humans. The science was shaky at best. Believing that plants flourished in springtime because of the increased blueness of the sky, he patented special greenhouses with blue filters on the glass which he claimed led to particularly abundant grape harvests. From grapes he moved on to pigs and cows, also claiming a vast improvement in growth. Although his ideas were not taken seriously by the scientific establishment it did lead to what became know as the “Blue-glass Craze”.