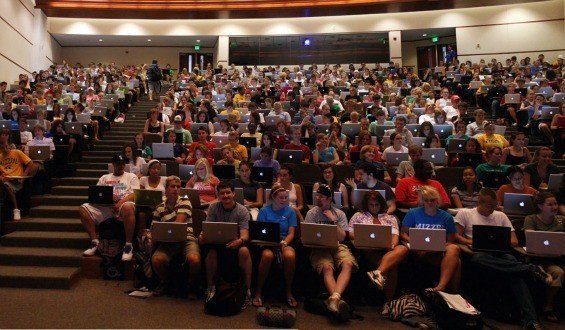 18 Mar Taking Notes With A Laptop Or Tablet? Study Shows Pen And Paper Secret To Smarts

Though many researchers have suggested taking notes on a laptop is not as effective writing them out in longhand with a pen and paper, previous studies focused on how students were distracted on their laptops (buying things on Amazon, watching movies,updating their Facebook pages or answering email).

Pam Mueller of Princeton and Daniel Oppenheimer of UCLA, in a study, “The Pen Is Mightier Than the Keyboard, Advantages of Longhand Over Laptop Note Taking? published April 23, 2014 in Psychological Science, a journal of the Association for Psychological Science, suggest that even when laptops are used solely to take notes, they may still be impairing learning because their use results in shallower processing.

“Our new findings suggest that even when laptops are used as intended ? and not for buying things on Amazon during class ? they may still be harming academic performance,? says psychological scientist Pam Mueller of Princeton University, lead author of the study.

In the first study, 65 college students watched one of five TED Talks on topics that were interesting but not common knowledge. The students, were either given offline laptops or notebooks, and were told to use whatever strategy they normally used to take notes.

The students were given three distractor tasks and 30 minutes later, had to answer factual-recall questions (e.g., “Approximately how many years ago did the Indus civilization exist??) and conceptual-application questions (e.g., “How do Japan and Sweden differ in their approaches to equality within their societies??) based on the lecture they had watched.

The results revealed that both groups of note-takers performed well recalling facts but laptop note-takers performed significantly worse on the conceptual questions. It appeared that laptop note takers’ were transcribing lectures verbatim rather than processing information and reframing it in their own words. Even when the researchers asked them to not type out the lectures word for word, the participants said they could not resist.

Even when tested after a week, the longhand note takers performed better on a recall test.

“It may be that longhand note takers engage in more processing than laptop note takers, thus selecting more important information to include in their notes, which enables them to study this content more efficiently,? the researchers write.

“I don’t anticipate that we’ll get a mass of people switching back to notebooks,? says Mueller, “but there are several new stylus technologies out there, and those may be the way to go to have an electronic record of one’s notes, while also having the benefit of being forced to process information as it comes in, rather than mindlessly transcribing it.?

In the early 1940s the philosopher, Martin Heidegger found the (then flourishing) use of the typewriter an insult to the relationship between the word and the expressive movement of the hand. He stated:

“The word no longer passes through the hand as it writes and acts authentically but through the mechanized pressure of the hand. The typewriter snatches script from the essential realm of the hand ? and this means the hand is removed from the essential realm of the word. The word becomes something ?typed.’ Mechanized writing deprives the hand of dignity in the realm of the written word and degrades the word into a mere means for the traffic of communication. Besides, mechanized writing offers the advantage of covering up one’s handwriting and therewith one’s character.?

Neurologist Frank Wilson regarded as a pioneer on the neurological basis of skilled hand use writes:

“Any theory of human intelligence which ignores the interdependence of the hand and brain function, the historical origins of that relationship, or the impact of that history on developmental dynamics in modern humans, is grossly misleading and sterile.?

“How does, or should, the educational system accommodate for the fact that the hand is not merely a metaphor or an icon for humanness, but often the real-life focal point ? the lever or the launching pad ? of a successful and genuinely fulfilling life? The hand is as much at the core of human life as the brain itself.?