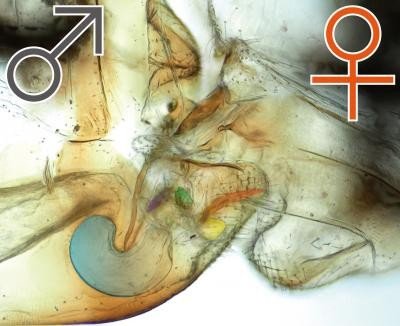 Snails have their genitals on their necks, penguins don’t have them at all, male seahorses carry the pregnancy and give birth and female hyena’s have a pseudopenis. The animal kingdom never ceases to amaze and shock us with its variety.

In 2010, Rodrigo Ferreira of the Federal University of Lavras discovered a 4-millimetre-long insect in a cave in east Brazil and together with Charles Lienhard of the Museum of the City of Geneva in Switzerland confirmed this ( then unknown to science) insect was not only a new genus, but also had remarkable and reversed sexual organs.

They called the insect Neotrogla from a large group called Psocoptera (booklice). Lienhard saw that the females had a penis-like organ which he dubbed the “gynosome”, and which they inserted deep into the male.

He contacted Kazunori Yoshizawa of Hokkaido University in Sapporo, Japan to examine the species. Yoshizawa observed the female insects insert an elaborate, penis-like organ into males’ vagina-like opening. The penis was partly covered in spines which anchor into the males vagina-like chamber with pouches in its walls, holding the male still while mating with him.

The gynosome does not squirt out anything during copulation which lasts from 40 to 70 hours! Instead it acts like a vacuum cleaner, sucking up the male’s sperm so that the female can fertilize her eggs as well as capsules of nourishment.

“Usually a new structure evolves as a modification of a previously existing structure,” he says. But the female penis is completely novel and thus it is more difficult to evolve one. “Evolution of such novelties is exceptionally rare,” says Yoshizawa.

Why did the Neotrogla females evolve penises?

The researchers speculate that the insects’ sex organs and sex-role reversal may have been driven over evolutionary time by the resource-poor cave environment in which the bugs live. Males of the genus provide females with nutritious seminal gifts in addition to sperm, making it advantageous for females to mate at a higher rate.