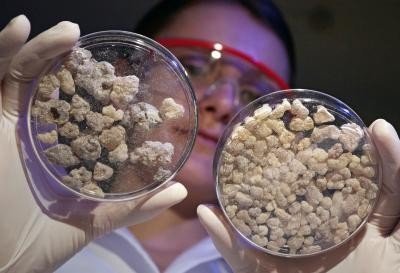 Frankincense resin which begins as a milky-white sticky liquid that flows from the trunk of the Boswellia tree when it’s injured, healing the tree’s wound, treasured by and named by the Frankish (French) Knights of the Crusades and one of the three gift of the Magi to baby Jesus, contains substances that have been clinically proven to fight inflammatory diseases like asthma, rheumatoid arthritis, atopic dermatitis, Crohn’s disease and a variety of cancers.

As part of a mutual project with partners of the University Saarbrücken and a start-up company, Professor Dr. Oliver Werz of the Friedrich Schiller University Jena (Germany) and his team examined the curative effect of frankincense.

The team discovered exactly where the Boswellic acids found in the resin (frankincense) from the trunk of Boswellia trees interferes in the process of inflammation. Prior studies had determined that frankincense contains anti-inflammatory substances but how these acids interact with the proteins of the inflammatory process hadn’t been determined until now.

“Boswellic acids interact with several different proteins that are part of inflammatory reactions, but most of all with an enzyme which is responsible for the synthesis of prostaglandin E2,” Oliver Werz points out. Prostaglandin E2 is one of the mediators of the immune response and plays a decisive role in the process of inflammation, in the development of fever and of pain. “Boswellic acids block this enzyme efficiently and thereby reduce the inflammatory reaction,” Dr. Werz explains.

With this, not only a targeted use in the therapy of inflammatory diseases is conceivable. It can also be expected that boswellic acids have less side effects than today’s prevalent anti-inflammatory treatments like diclofenac or indometacin whose impact is less specific, and which can increase the risk of stomach ulcers and can negatively affect renal function.

Though frankincense is used for years in Ayurvedic medicine, clinical studies were not conclusive enough to license drugs produced from the resin to pharmacies; this latest study may change that.

Frankincense resin has been considered throughout the ages to have a wealth of health-supporting properties. The resins of Boswellia carteri and Boswellia serrata have been used for the treatment of rheumatoid arthritis and other inflammatory diseases such as Crohn’s disease. The anti-inflammatory activity has been attributed to the resin’s ability in regulating immune cytokines production and leukocyte infiltration. Boswellia serrata extract also exhibits anti-bacterial and anti-fungal activities. Additionally, extracts from Boswellia species gum resins might possess anti-cancer activities, based on their anti-proliferative and pro-apoptotic activities in rat astrocytoma cell lines and in human leukemia cell lines as well as their anti-carcinogenic activity in chemically induced mouse skin cancer models. Clinically, extract from the resin reduces the peritumoral edema in glioblastoma patients and reverses multiple brain metastases in breast cancer patients. (Source)

“Boswellic acids exclusively occur in the resin of Boswellia trees and are very difficult to produce synthetically,” Werz points out. Therefore these trees are the only source of these promising active ingredients. However, Boswellia trees are already an endangered tree species. In many places, they are just being used as heating fuel. “Thereby without sustained protection not only plant species are endangered but at the same time medicine loses promising active ingredients,” Professor Werz warns.