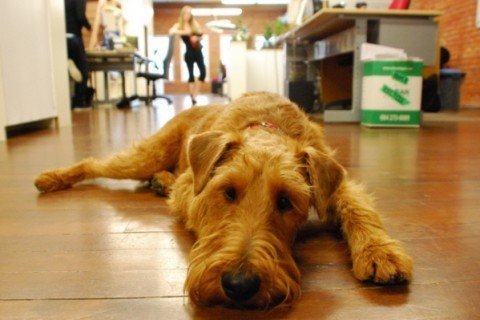 According to a Virginia Commonwealth University study, having a dog at work not only reduces the owners stress level but also increased the level of job satisfaction for other employees as well.In the past 20 years, many studies have looked at the relationship between job stress and a variety of ailments: Mood and sleep disturbances, upset stomach and headache, and disturbed relationships with family and friends signaling the early symptoms of job related stress.

“Short-lived or infrequent episodes of stress pose little risk. But when stressful situations go unresolved, the body is kept in a constant state of activation, which increases the rate of wear and tear to biological systems. Ultimately, fatigue or damage results, and the ability of the body to repair and defend itself can become seriously compromised. As a result, the risk of injury or disease escalates.” CDC

This preliminary study published in the March issue of the International Journal of Workplace Health Management, found that dogs in the workplace may buffer the impact of stress during the workday for their owners and make the job more satisfying for those with whom they come into contact.

“Although preliminary, this study provides the first quantitative study of the effects of employees’ pet dogs in the workplace setting on employee stress, job satisfaction, support and commitment. Dogs in the workplace can make a positive difference. The differences in perceived stress between days the dog was present and absent were significant. The employees as a whole had higher job satisfaction than industry norms.”

The study took place at a service-manufacturing retail company in Greensboro, N.C. which employs 550 people. During the study 20 to 30 dogs were on premises. Over one work week saliva samples were collected and surveys completed during the day.

The stress levels of all the groups were the same as the day began, but during the course of the day stress declined for the DOG group with their dogs present and increased for the NODOG and NOPET groups. The NODOG group had significantly higher stress than the DOG group by the end of the day. A significant difference was found in the stress patterns for the DOG group on days their dogs were present and absent. On dog absent days, owners’ stress increased throughout the day, mirroring the pattern of the NODOG group.

Preliminary findings suggest that pet dogs in the workplace do indeed buffer the impact of stress during the workday for their owners and may also contribute to higher job satisfaction for all employees in the organization, regardless of whether the person owns the dog or not. 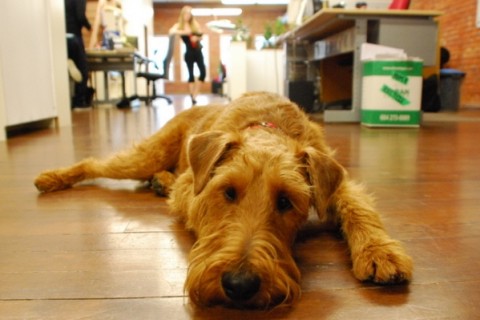