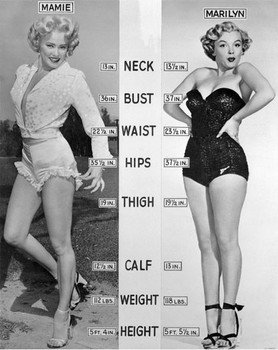 Hip width may play a role in a woman’s decision to have sex.

On April 23, 2014, the University of Leeds in the UK announced a new study, “Evidence to Suggest That Women’s Sexual Behavior Is Influenced by Hip Width Rather than Waist-to-Hip Ratio? published in Springer’s journal Archives of Sexual Behavior, that examined how a woman’s build influences her sexual behavior.

Waist-to-hip ratio is such an important beauty factor and indicator of women‘s health and fertility.

Apparently, as we evolved from walking on two legs and not four, Nature demanded changes to our hips and muscles so we could both walk and reproduce.

In order for a woman to do both walking and child-bearing; her hips are only so wide ? just enough for the passage of a baby.

Lead author, Colin A Hendrie and colleagues began their study by exploring why how the threat of injury and or mortality during birthing from too small hips had an influence on women’s sexual choices.

148 women between 18 and 26 years old who had at least one sexual partner previously participated in the study. Their hip width (defined as the distance between the upper outer edges of the iliac crest bones of the pelvis) was measured, as well as their hip circumference at the widest point and their waist circumference at its narrowest point.

“Participants also completed a questionnaire about their sexual histories, including the age at which they lost their virginity, the number of sexual partners they had had, and information about emotionally significant sexual relationships they had had.?

The results showed that the number of sexual partners was driven by one-night stands. The results determined it had nothing to do with waist-to-hip ratio but rather hip width.

More specifically, the women for whom one-night stands accounted for three out of every four of their sexual relationships had hips at least two centimeters (0.8 inches) wider than their counterparts in whose lives such fleeting relationships were not as prevalent.

The researchers, Hendrie and co-authors Victoria J. Simpson and Gayle Brewer, concluded that women with wider hips are more likely to engage in sex because the birth process is generally easier and less traumatic for them than for smaller-hipped women (below 31cm).

“Women’s hip width has a direct impact on their risk of potentially fatal childbirth-related injury. It seems that when women have control over their own sexual activity this risk is reflected in their behavior. Women’s sexual activity is therefore at least in part influenced by hip width,? concludes Hendrie.

*Please note: Hip width is not defined by circumference in this study but by the distance between the upper outer edges of the iliac crest bones of the pelvis.