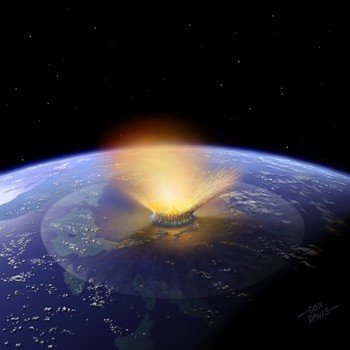 At a livestreaming press conference today, April 22, 2014 at 11:30 a.m. PST, former NASA astronaut Dr. Ed Lu, Tom Jones, four-time US Shuttle astronaut and President of the Association of Space Explorers and Apollo 8 astronaut Bill Anders will unveil a new video showing the surprising number of asteroid impacts on Earth during the last decade.

The visualization will show data from the nuclear weapons test-warning network, supplied by Peter Brown, Western University of Canada, which has detected 26 multi-kiloton explosions since 2001 ? all of which are due to asteroid impacts.

“This data shows that asteroid impacts are NOT rare, but actually 3-10 times more common than we previously thought,? stated Dr. Lu.

In an article on Space.com, it appears red tape is making it tougher for these researchers to study and characterize asteroid strikes on Earth.

“The bureaucratic snafu affects the use of U.S. government space assets that help scientists study “airbursts” like the meteor that exploded without warning over Russia last year. At issue is the ability to combine space data with outputs from a global network of seismic, infrasound and hydroacoustic sensors that have been deployed worldwide to provide treaty verification for a nuclear test ban.? This network is the International Monitoring System (IMS) overseen by the Comprehensive Nuclear Test Ban Treaty Organization (CTBTO).

Ed Lu created a nonprofit, the B612 Foundation, which hopes to set up a defense perimeter around the space telescope called Sentinel, equipped with optics to search the skies for threatening objects which is scheduled for launch in 2018.

Lu explains in an interview on Wired.com:

“Since 2000, there have been eight impacts roughly the size of Hiroshima or larger, and the fact that asteroids hit Earth somewhat randomly means you’re basically on borrowed time. You don’t know when the next one’s gonna happen.”

“Sentinel will find 200,000 asteroids in its first year. And there are about a million of them out there large enough to destroy a major city. So we have a long way to go, and that’s what Sentinel is going to do. We’re trying to protect Earth, not do scientific studies on asteroids. And while it is true that the great majority of those would not be harmful because they explode at high altitude over unpopulated areas, not all of Earth is unpopulated.?

Funding has been tough for the non-profit. Now, it is funded largely by private donors like Googler Peter Norvig and Reddit CEO Yishan Wong.

Finally, Ed Lu implores: “Do you make people pay for the data? That’s why we’re doing this as a nonprofit. The other challenge is human nature?people bury their heads in the sand. Did New Orleans know that the next major hurricane would destroy that city? Yup. Did they fix the levees? Nope.?