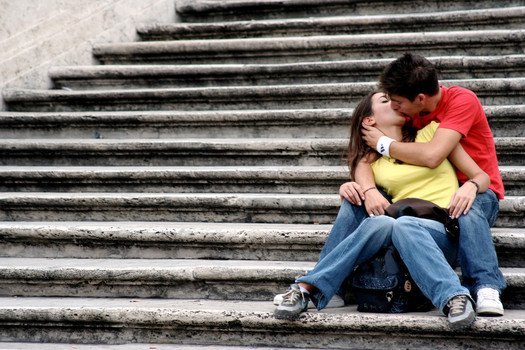 Dr. Phil may be right in saying, “When you’re falling in love, differences may seem cute but within time, they can get annoying and threaten a relationship.? A new study from the University of Colorado Boulder, “Genetic and educational assortative mating among US adults? published May 19, 2004 in PNAS reports we are more likely to pick mates who have similar DNA.

This is the first study to look at how genetics plays a role in our choice of partners. Benjamin Domingue, lead author of the paper and a research associate at CU-Boulder’s Institute of Behavioral Science says:

“It’s well known that people marry folks who are like them. But there’s been a question about whether we mate at random with respect to genetics.”

The researchers looked at SNP’s to do this experiment. SNPs (pronounced “snips”) are single nucleotide polymorphisms. When a cell divides it copies its DNA, so the two new cells have the same genetic information. Sometimes though it messes up and makes a mistake (like a typo) which makes the new cells have a few variations in some places of the DNA sequence. We inherit these SNPs versions from our parents, so they can be used to tell how closely related we are to others and how similar we are to other humans.

Out of the 825 non-Hispanic white American couples they examined, they found there were fewer differences in the DNA of married people than in randomly selected people.

They later compared this to a more thoroughly studied phenomenon of people marrying others with similar educations. They found that the preference for a genetically similar spouse, known as genetic assortative mating, is about a third of the strength of educational assortative mating.

In Gustaf Bruze’s study, “Marriage Choices of Movie Stars: Does Spouse’s Education Matter?? published in the Journal of Human Capital in 2011, used movie stars to unravel the reasons why people tend to marry partners of similar education levels. He found that the movie star’s level of formal education had no correlation to their success, either in terms of box office earnings or the likelihood of winning an Oscar. Yet despite the disconnect between education and success, movie stars who marry each other still tended to have similar educational backgrounds. And this had nothing to do with being in the same circles, socializing or even similar interests.

Future research will explore whether similar results are found between married people of other races and whether people also choose genetically similar friends.