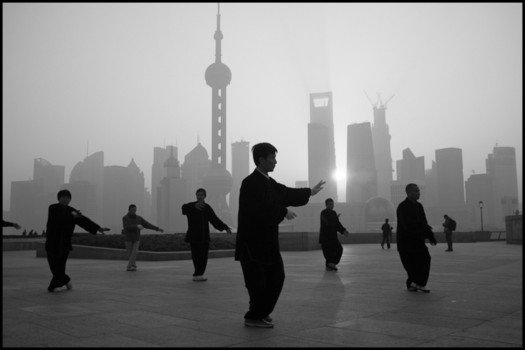 For centuries, Tai Chi Chuan’s spontaneous meditative movements are known to bring balance to the body. Many studies over the years have shown the practice leads to healing, stress neutralization, and personal tranquillity. But few research attempts explored the effects of practising Tai Chi Chuan on life span. A new study provides direct evidence of Tai Chi’s anti-ageing effects.

In a news release on May 28, 2014, the Cell Transplantation Center of Excellence for Aging and Brain Repair announced a new study, “Tai Chi Intervention Increases Progenitor CD34+ Cells in Young Adults? published in issue 23(4/5) of Cell Transplantation (which is freely available on-line) that reported people who perform Tai Chi had a rise in their cluster of differentiation 34 expressing (CD34+) cells, a stem cell important to a number of the body’s functions and structures.

The study compared the rejuvenating and anti-ageing effects among a Tai Chi group, brisk walking group and no exercise habit group. Thirty-two participants were selected out of a possible 60 based on a survey, and they were separated into three groups.

“To evaluate the potential life-lengthening effect of Tai Chi, we conducted a year-long, retrospective cross-sectional study comparing the rejuvenating and anti-ageing effects among three groups of volunteers under the age of 25 who engaged in either Tai Chi (TCC), brisk walking (BW), or no exercise habit (NEH),” said study corresponding author Dr. Shinn-Zong Lin of the Center for Neuropsychiatry, China Medical University Hospital, Taichung, Taiwan. “We used young volunteers because they have better cell-renewing abilities than the old population and we also wanted to avoid having chronic diseases and medications as interfering factors.”

Compared with the NEH group, the TCC group had a significantly higher number of CD 34+ cells,” wrote the authors. “We found that the CD34+ cell count of the TCC group was significantly higher than the BW group.” CD 34+ cells, they explained, express the CD 34 protein and are “cluster markers” for hematopoietic stem cells (blood stem cells) involved in cell self-renewal, differentiation and proliferation.

“It is possible that Tai Chi may prompt vasodilation and increase blood flow,” said Lin.

“Considering that brisk walking may require a larger space or more equipment, Tai Chi seems to be an easier and more convenient choice of anti-ageing exercise. This study provides the first step into providing scientific evidence for the possible health benefits of Tai Chi.”

According to the authors, Tai Chi “has been confirmed to benefit” patients with mild to moderate Parkinson’s disease and fibromyalgia. In addition, they cite possible advantages of Tai Chi in pain reduction, fall prevention and balance improvement, aerobic capacity, blood pressure, quality of life and stress reduction.

Tai Chi has been shown to be helpful in the following conditions according to various research studies:

A study, “Tai Chi Chuan Exercise for Patients with Cardiovascular Disease” at National Taiwan University found Tai Chi training has significant benefits for common cardiovascular risk factors, such as hypertension, diabetes mellitus, dyslipidemia, poor exercise capacity, endothelial dysfunction, and depression. Tai Chi is also safe and effective in patients with acute myocardial infarction, coronary artery bypass grafting surgery, congestive heart failure and stroke. The researchers concluded that Tai Chi has significant benefits to patients with cardiovascular disease, and it may be prescribed as an alternative exercise program for selected patients with heart disease. A May 2014 Harvard Medical School study, “The Impact of a Tai Chi Exercise Program on Patients with Chronic Heart Failure: Qualitative Analysis from a Randomized Controlled Trial” found an increase in quality of life for heart failure patients. It was also found in a review of 26 studies in English or Chinese published in Preventive Cardiology that in 85 per cent of the trials, Tai Chi lowered blood pressure from 3 to 32 mm Hg in systolic pressure and from 2 to 18 in diastolic pressure.

A study examining an extensive list of health benefits of Tai Chi from Parkinson’s disease, sleep problems, stroke, bone health, cardiopulmonary fitness to anxiety and depression can be found in the study, “A Comprehensive Review of Health Benefits of Qigong and Tai Chi”.