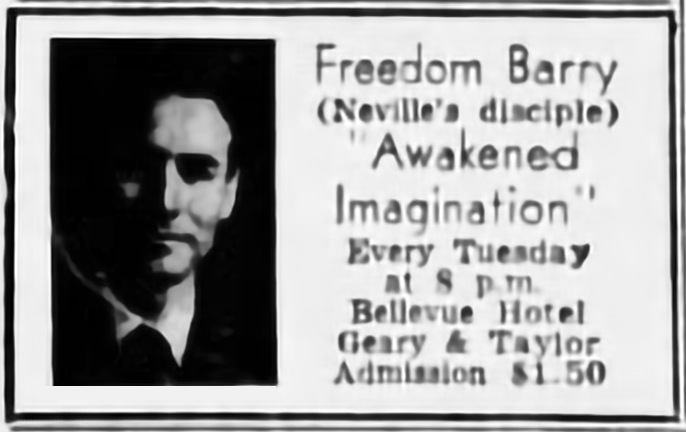 Recovered from the internet archive

Freedom Barry was born on March 28, 1921 in East Parsonsfield, Maine. Freedom, as his given name, came to typify the Truth of his journey in life.

After graduation from High School, he went to Boston where he majored in piano at The New England Conservatory of Music. At 20, he experienced the nature of miracle and the meaning of his given name. With a heart condition that required Digitalis, and near-sightedness that required thick-lens glasses, his life seemed very limited.

A student friend of his at the school dormitory kept suggesting he should see what Christian Science had to offer. Resistance finally gave way to acquiescence, and he attended his first service at the Mother Church there. With his glasses off, he could clearly read quotations from Scripture and Mary Baker Eddy’s words chiseled in the limestone walls of the church. Suddenly, he recognized that Truth had set him free from both impaired vision and a malfunctioning heart. He returned to his room in the dormitory, threw his Digitalis into the trash, and his heart has sustained his lifelong embodiment of the freedom of Truth lived as Individual Spiritual Awakening.

An acquaintance who knew of Freedom’s involvement in metaphysics took a copy of Neville’s Your Faith Is Your Fortune to him with instruction to return it to the library as she had no interest in it. He spent the evening and well into the morning hours reading it with absorption. The next evening, he finished his first reading of it, and before returning it to the library, he phoned the publisher who informed him that Neville lived in Los Angeles and lectured two evenings each week at the Wilshire-Ebell, where all his books were available. Freedom immersed himself in those books and lectures. He went backstage and asked Neville if he taught privately. ‘No’ was the decisive answer, but he quickly answered, ‘Mind is the operant power, and the premise proves itself in performance.’ This took place in 1958 when Neville was writing his then new book The Law and the Promise, and he invited members of his audience to share with him their proofs of his teaching. Freedom sent him three case histories in rapid succession, and before the book was published, Neville had persuaded Freedom to move to San Francisco as the resident teacher of his work.

Neville’s San Francisco agents Lord and Jordan rented Freedom space in their metaphysical bookstore which seated 30. He gave his first lectures there on February 1, 1960. After Neville’s annual two-week San Francisco lecture series in July 1960 (in which he repeatedly urged his students to avail themselves of Freedom’s teaching), he moved to larger quarters that would seat 150 at the Marines’ Memorial Club.

In August of 1962, at Neville’s urging him to get a book in print as a useful auxiliary to the teaching, Freedom went to Laguna Beach, California where he wrote I Do in ten days.

In I Do, Freedom writes in a chapter called ‘The Discovery’;

One forenoon late in September of 1960 while I was walking east on Post Street in busy downtown San Francisco, I entertained the most extraordinary experience in my spiritual development. Quite suddenly I became aware that I was not my body, although I most assuredly was its life. To my illumined sense, my being was totally invisible, although I was far more real than I had ever felt myself to be up to that moment. Not only was I invisible and real, but that invisible reality was the actual substance of all that I beheld, and I was beholding the same objects that had become familiar to me from living in that exciting city.

To my apprehension, I was the Bay Bridge; I was the Bohemian Club; I was the pebble I sensed so keenly under my foot; I was the traffic signal at the corner; I was even the newspaper vendor. Everything I was seeing was just as I had always seen it, except that in this experience no object or person even seemed to have existence independently of my perception of its being. To my invisible reality, the perception and I, the perceiver, were one and the same substance.

So his experience to him proved “In him we live and move and have our being.” (Acts 17:28)

And that was just the beginning…

After moving to California’s central coast, he was a tour guide at Hearst Castle from 1967-1983; was the narrator of Milford Haven USA, (a 60 episode radio drama for the BBC); performed in 12 productions at the Pewter Plough Playhouse; and 3 productions for the Classic American Theatre. He has also made a number of radio and TV commercials for local businesses.

In addition to I Do, Freedom has written Passkey, Seven Salient Subjects, and Gate of the Year.

Article Name
Neville Goddard Research: Freedom Barry: A Biography By Tirza Ericson
Description
One forenoon late in September of 1960 while I was walking east on Post Street in busy downtown San Francisco, I entertained the most extraordinary experience in my spiritual development.
42
SHARES
ShareTweet