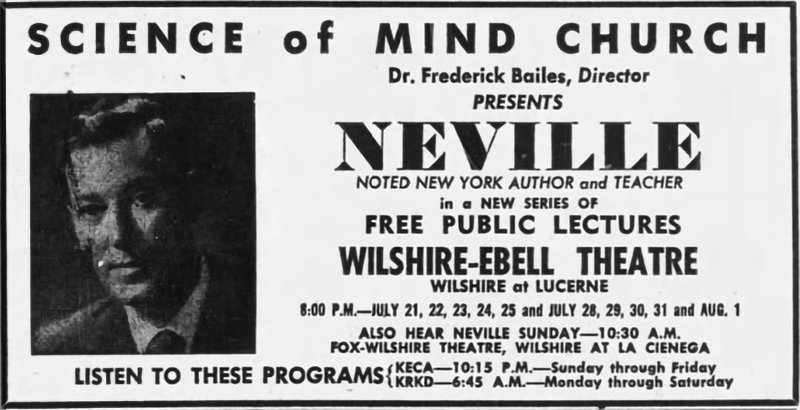 In about a dozen or so Neville Goddard lectures, Neville mentions he took over the audience of a Dr. Frederick Bailes at Fox Wilshire Theater on Wilshire Boulevard, near La Cienega and also his radio show on KECA, Los Angeles.

Bailes praised Neville. In his lecture “Sound Investments” there is a story about a man Jimmie Fuller who spent his last Fifty–four dollars to see Neville and later in his life made over a quarter of a million. When asked how he found Neville he said:

“I turned the radio on one night and I heard Dr. Bailes. I had never heard of the man before. At the end of his lecture, which I thoroughly enjoyed, he said Neville is coming to speak for us and it’s a MUST. Well the next night, I so liked Dr. Bailes that I turned him on the next night, and for the next two weeks he kept on promoting you, and he was so generous in his praise, I thought I’ve got to hear this man. So when I came, I enjoyed what I heard on Sunday morning, and then you announced you were speaking the following night at this place.”

He also mentions Bailes in “Proof, The Law Works”

“I told the story, and I was severely criticized for it by a lady at a dinner party one night when Fred Bailes, who is now gone from this world, gave a party at the Ambassador Hotel. And I had told this story about two weeks before to one of his great – I would say –contributors who would come and always write a huge big check at the end of a year or the end of a month to keep that going. And she was most critical that night. I didn’t feel well that night at all. And she said, “You know, I can’t quite understand how you could take the platform before an audience of twenty-six hundred, a thousand who could not get in – they were all overflowing at the Fox Wilshire, and tell what you told about your wife” – this was my first wife.”

Dr. Frederick Bailes gave weekly lectures to capacity audiences in Los Angeles and was well known for his twice-weekly radio broadcasts. He is also the author of Your Mind Can Heal You; Basic Principles of the Science of Mind; The Healing Power of Balanced Emotions; and Collected Essays of Frederick Bailes.

In his book Your Mind Can Heal You he gives a seven step approach to spiritual mind treatment. It starts, he says, “with the fundamental truth that the person for whom we are treating is a perfect idea in the Mind of God, and our whole procedure during a treatment is intended to remove from our own mind any idea or picture of imperfection or sickness.” Here are the seven “R’s” that Bailes suggests:

Relaxation: We assume a position that assures physical relaxation and a quiet mind.

Recognition: We recognize that we are not speaking into a void. We are surrounded by the Creative Mind of the universe, which receives our thought embodied in our words and sets to work to carry it out into material form.

Relationship: We consciously unify with the Creative Mind, knowing that we ourselves, the person treated for, and this Mind are all one. There can never be any separation between them.

Realization: Once we have arrived at the point where we realize the inner perfection of the one being treated for, we shall know it, because we shall have arrived at a place of quiet, calm assurance.

Release: We are not responsible for the outcome of the treatment. Our only responsibility is to build a clear picture in our mind of the perfection of ourselves and the one being treated for, and to remove all doubts about that perfection. We now release this picture to the Creative Mind.

Rejoice: We give thanks for the success of our treatment, not to influence how Mind works but to confirm our belief that the entire situation is resolved in exactly the right and ideal way. 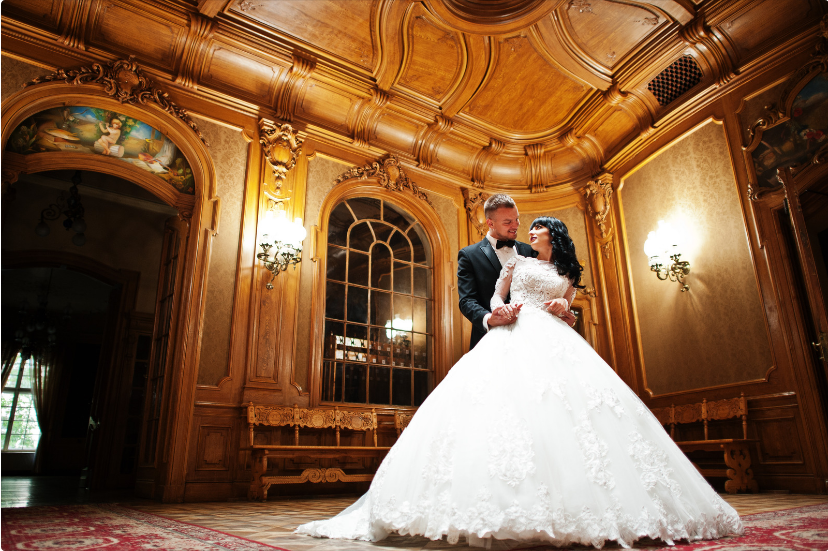 How to Manifest Love “The Invisible Matrimonial Agent”

We prayed together and I suggested that she use a daily prayer treatment. It ran something like this:

I know that I have believed a lie in thinking that I was ever rejected by anyone. I know that I am greatly desired by the type of man who would fill my ideals. I know that he will never find true and lasting happiness until he finds it in me. He needs me just as truly as I need him. Neither one confers a one-sided benefit upon the other. Each gives and each gets.

The Infinite Knower knows where each of us is to­day. He is even now moving us across the chessboard of life so that we shall meet, and we shall recognize one another. I let go of all my tenseness, relinquishing the entire responsibility for the meeting to the Infinite Knower. I know that we shall know each when we meet; that I am not in competition with anyone else for this man, and he is not in competition with anyone else for me.

He needs me, wants me, loves me, and all these emo­tions are returned by me. I release this whole situation to the Infinite Knower, giving thanks for its completion now, even before I see its manifestation.

Read More About How to Manifest Love by Dr. Frederick Bailes 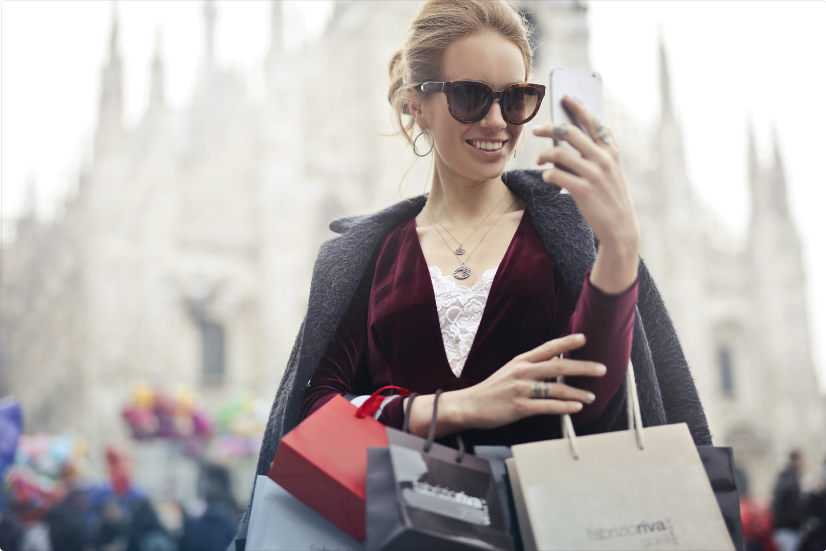 Why the Rich Get Richer by Dr. Frederick Bailes

“The rich get richer; the poor get poorer.” Political ideologies have been built up on misinterpretations of this fact of life. Lives have been spent in the shallows of futility. The acids of frustration and envy have eaten away at the happiness of millions who have believed that the rich were lucky and the poor were underprivileged. Politicians have ridden into power on this lie, exploiting it for their own benefit, cooing their sympathy for the blinded souls who voted them in. Encouraged to suck on a governmental breast, the “underprivileged” have been kept in political and spiritual infancy.

The time has come to lay the dead cat on the only doorstep where it belongs: at the feet of the individual. Each of us must learn that the key to every man is his thought, that it is done unto him according to his own belief. If he continues to believe a lie, he will continue to experience the false and unsatisfying life that issues from that lie.

No dictator, no politician can give a man anything more than his own consciousness draws in. All they can give is a political system. Within that system, each of us can garner only that which is the reproduction of his own consciousness. They who have not the consciousness remain the slaves under any system. The cream will always rise to the top; it always has. This is not one of man’s laws. It is a law of God, working through man’s mental operations.

“The rich get richer; the poor get poorer.” Truer word was never spoken. But it is a statement of mental law-not an edict of God. The riches are the riches of consciousness.

Read More About Why the Rich Get Richer by Dr. Frederick Bailes

Be What You Wish Be What You Believe
“I have a lavish, steady, dependable income, consistent with integrity and mutual benefit.” As I have said repeatedly, everything depends upon our attitude towards ourselves. That which we will not affirm as true of ourselves cannot develop in our life.

Sound Investments
“You must stop spending your thoughts, your time and your money; everything in life must be an investment.”

Stone, Water or Wine
It has been my privilege and pleasure to address Dr. Frederick Bailes’ Sunday audiences in the past few years. Today, I am to extend the privilege in speaking to you, his unseen audience of the radio. This will be a very practical series of talks for my subjects will be drawn largely from the Bible, the most spiritual of all books.

Meditation
Many people tell me they cannot meditate. This seems to me a bit like saying they cannot play the piano after one attempt. Meditation, as in every art or expression, requires constant practice for perfect results.

Proof, The Law Works
Actually assume the most glorious thing in the world for yourself or any aspect of yourself. Trust it. And that imaginal act, if it takes a thousand or ten thousand or a hundred thousand of your projected selves, will use them to make that thing become real in your world.

Affirm The Reality Of Your Own Greatness
This is essentially how we change our future. A “now” which is “elsewhere” has for us no absolute meaning. We only recognize “now” when it is at the same time “here.” When we feel ourselves into the desired state “here” and “now” we have truly changed our future.

The Law of Assumption
What you see when you look at something depends not so much on what is there as on the assumption you make when you look. What you believe to be the real physical world is actually only an assumptive world

Truth
The truth that is within us is governed by imaginative love. Knowing this great truth, we can no longer imagine evil against any neighbor. We will imagine the best of our neighbor.

Feeling is the Secret
Recognizing the power of feeling, let us pay strict attention to our moods and attitudes. Every stage of man’s progress is made through the exercise of his imagination and feeling. By creating an “ideal” within our mental sphere we can feel ourselves into this “ideal image” till we become one and the same with it, absorbing its qualities into the very core of our being.

Article Name
Neville Goddard & Frederick Bailes [Invisible Marriage Agent and Rich Get Richer]
Description
Bailes praised Neville. In his lecture "Sound Investments" there is a story about a man Jimmie Fuller who spent his last Fifty--four dollars to see Neville and later in his life made over a quarter of a million
50
SHARES
ShareTweet