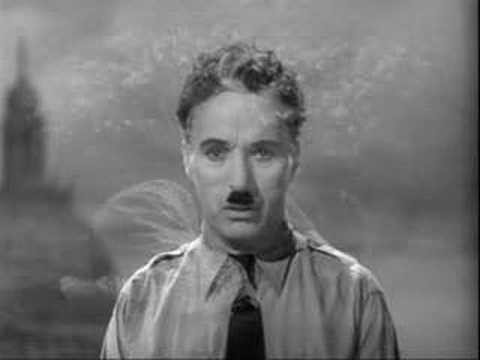 Below is a 75 year old speech of Chaplin’s still (unfortunately) so relevant even to even our present times. Some interpret it as an “out-of-character personal plea” from Chaplin himself on the state of our world and humanity at large.

A synopsis of the film can be viewed here, but what is most intriguing is the address at the end of the film. One of the main characters, “the barber” who is mistaken for the dictator, delivers a speech in front of a large audience and over the radio to the nation.

Charlie Chaplin and Adolph Hitler were both born in April of 1889 (Chaplin on the 16th of April 1889 and Hitler on the 20th of April 1889). Charlie Chaplin’s son, Charles Chaplin, Jr. described once how his father was haunted by the similar backgrounds of Hitler and himself.

“Their destinies were poles apart. One was to make millions weep, while the other was to set the whole world laughing. Dad could never think of Hitler without a shudder, half of horror, half of fascination. “Just think,? he would say uneasily, “He’s the madman, I’m the comic. But it could have been the other way around.?

Both Hilter and Chaplin grew up in poverty, had alcoholic fathers and ill mothers. Both wore toothbrush moustaches and both liked the music of Robert Wagner. Both rose to power and fame during the 30’s and Chaplin, so much so, that after his trip to Berlin in 1931, the enraged Nazis published a propaganda booklet called, “The Jews are Looking at You” in which they referred to him as “a disgusting Jewish acrobat” mistakenly believing Chaplin to be Jewish,.

Many say it was this booklet that inspired Chaplin to write, direct and produce, The Great Dictator, the first major Hollywood feature film that satirized Nazism and Adolph Hilter.

Chaplin invested $1.5 million of his own money to finance the making of the movie, almost a decade after the silent era ended (one of his first true talking pictures). The Great Dictator was filmed in 1939 and released in 1940; way before news of death camps and the Holocaust were known. Chaplin was even blacklisted as a “pre-mature anti-fascist” and United Artists studios almost banned the production at the time because surprisingly, anti-Nazism was considered politically incorrect since the war had not yet broken out with the U.S. Chaplin also mentions retrospectively in his autobiography, that had he known of the extent of the horrors he could not have satirized the atrocities.

But, as fate has it, he went on with the production, encouraged even by President Franklin Delano Roosevelt to make the film. IMDb

It is well worth viewing Chaplin’s moving performance in the video before reading the transcript below.

As you listen to his speech, contemplate if it isn’t only the vicious dictators without that have perpetuated this situation in our world, but maybe that vicious and controlling “inner tyrant” in our psyches, the inner autocrat that makes us control other people, ourselves and our lives to the detriment of the inner freedom gained by the trust in a more holistic  view of ourselves.

The Jewish Barber (Charlie Chaplin’s character): Hope… I’m sorry but I don’t want to be an Emperor – that’s not my business – I don’t want to rule or conquer anyone. I should like to help everyone if possible, Jew, gentile, black man, white. We all want to help one another, human beings are like that.

The way of life can be free and beautiful.

But we have lost the way.

Greed has poisoned men’s souls – has barricaded the world with hate; has goose-stepped us into misery and bloodshed.

We have developed speed but we have shut ourselves in: machinery that gives abundance has left us in want. Our knowledge has made us cynical, our cleverness hard and unkind. We think too much and feel too little: More than machinery we need humanity; more than cleverness we need kindness and gentleness. Without these qualities, life will be violent and all will be lost.

The airplane and the radio have brought us closer together. The very nature of these inventions cries out for the goodness in men, cries out for universal brotherhood for the unity of us all. Even now my voice is reaching millions throughout the world, millions of despairing men, women and little children, victims of a system that makes men torture and imprison innocent people. To those who can hear me I say “Do not despair”.

The misery that is now upon us is but the passing of greed, the bitterness of men who fear the way of human progress: the hate of men will pass and dictators die and the power they took from the people, will return to the people and so long as men die [now] liberty will never perish…

Soldiers – don’t give yourselves to brutes, men who despise you and enslave you – who regiment your lives, tell you what to do, what to think and what to feel, who drill you, diet you, treat you as cattle, as cannon fodder.

In the seventeenth chapter of Saint Luke it is written “the kingdom of God is within man? – not one man, nor a group of men – but in all men – in you, the people.

You the people have the power, the power to create machines, the power to create happiness. You the people have the power to make life free and beautiful, to make this life a wonderful adventure. Then in the name of democracy let’s use that power – let us all unite. Let us fight for a new world, a decent world that will give men a chance to work that will give you the future and old age and security. By the promise of these things, brutes have risen to power, but they lie. They do not fulfill their promise, they never will. Dictators free themselves but they enslave the people. Now let us fight to fulfill that promise. Let us fight to free the world, to do away with national barriers, do away with greed, with hate and intolerance. Let us fight for a world of reason, a world where science and progress will lead to all men’s happiness.

Soldiers – in the name of democracy, let us all unite!

Look up! Look up! The clouds are lifting – the sun is breaking through. We are coming out of the darkness into the light. We are coming into a new world. A kind new world where men will rise above their hate and brutality.

The soul of man has been given wings – and at last he is beginning to fly. He is flying into the rainbow – into the light of hope – into the future, that glorious future that belongs to you, to me and to all of us. Look up. Look up. 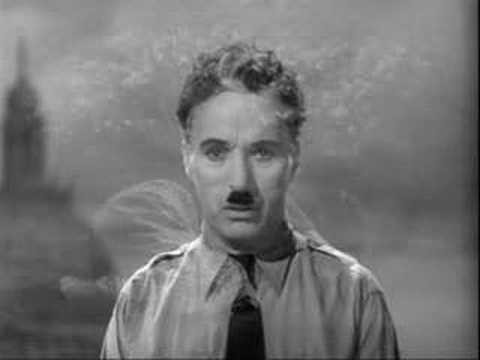 Article Name
Chaplin's shocking and truly timeless speech on the future of humanity
Description
Below is a 75 year old speech of Chaplin's still (unfortunately) so relevant even to even our present times. Some interpret it as an "out-of-character personal plea" from Chaplin himself on the state of our world and humanity at large.
Author
Tima Vlasto
Publisher Name
Cool Wisdom Books
46
SHARES
ShareTweet