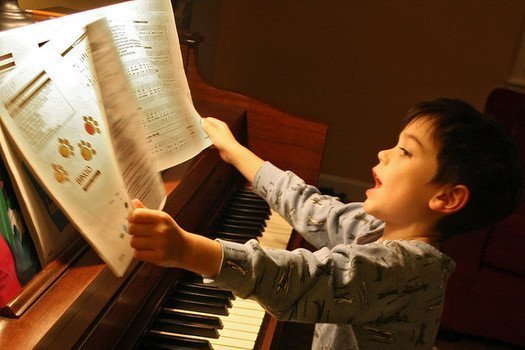 Can 30 minutes of music training make you better at using language and math? We normally think that speech, language, logic and numbers are left brain activities; while images, imagination, day-dreaming and music are right brain. The left hemisphere is for logic and science while the right is for intuition and art. While the left brain analyzes, the right brain sits in an alpha-state and processes colors, insights, dimensions and emotions.

Further research has shown though that neither hemisphere is totally “dominant” for music, but rather both hemispheres are involved in some way.

In the past, some experiments proved that more experienced musicians actually processes music with the left brain, they use their analytical knowledge and process music intellectually because of their expertise, while non-musicians use more of their right hemisphere.

Also, while a musician is practicing music, it is actually the left brain that learns to manipulate the body to sing and play chords and it is only after the mechanical process has been learned that the musician can use the right brain to sing or play music, adding other dimensions like emotion, intonation and timbre without thinking.

In a news release on May 8, 2013 from University of Liverpool, researchers carried out two studies on brain activity patterns of musicians and non-musicians at Institute of Psychology, Health and Society and confirmed that musical training can increase blood flow in the left hemisphere of the brain.

So, in the second study they did the same experiment only with non-musicians but gave them music training for 30 minutes and surprisingly when tested after the training they scored well on both tasks similar to the musicians in the previous study.

Amy Spray, who conducted the research as part of a School of Psychology Summer Internship Scheme, said: “The areas of our brain that process music and language are thought to be shared. Previous research has suggested that musical training can lead to the increased use of the left hemisphere of the brain. This study looked into the modulatory effects that musical training could have on the use of the different sides of the brain when performing music and language tasks. It was fascinating to see that the similarities in blood flow signatures could be brought about after just 30 minutes of simple musical training.?

Liverpool Psychologist, Dr Georg Mayer, who supervised Amy, explained: “This suggests that the correlated brain patterns were the result of using areas thought to be involved in language processing.

“We can therefore assume that musical training results in a rapid change in the cognitive mechanisms utilized for music perception, and these shared mechanisms are usually employed for language.?

This may explain why Mozart could play the violin at three and write his first symphony at eight but was also, not only fluent in his native German, but in French, Italian, and English as well.