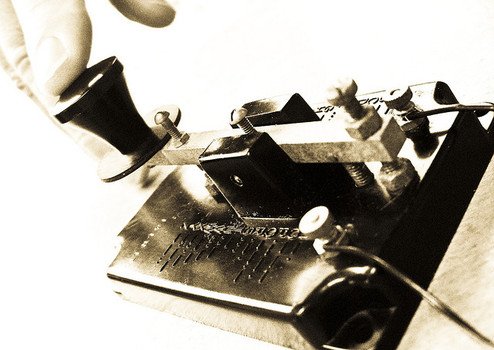 April 27 is Morse Code Day, which commemorates the birthday of Samuel Morse, inventor of the Telegraph and Morse code.

Morse was not only “the Father of American photography,? painted some of the most famous portraits and landscapes in America, invented the Telegraph and the first binary code (Morse code), may actually be the true inventor of the first “Victorian internet“, but also was a man who gave credit for all his works to God.

Morse’s father, Jedidiah Morse had a divinity degree from Yale and was a preacher of the Calvinist faith. Samuel followed his father’s footsteps to Yale and received instruction in the subjects of religious philosophy, mathematics and attended lectures on electricity and though he respected his father’s religious opinions, sympathized more with the Unitarians.

Samuel Morse spent his early years as an accomplished artist which attracted international attention; he painted many historical subjects and portraits and helped found the National Academy of Design.

But, one fateful day in 1825, when Morse was 500 kilometers away in Washington D. C. to paint a portrait commissioned by the Marquis de Lafayette, a horse messenger delivered a letter from his father telling him that his young wife suddenly died. Morse immediately left Washington for his home, but by the time he got there, she had already been buried.

The horror that he was unaware for days of his wife’s sickness and death, inspired him to invent a means of communicating information rapidly over long distances.

While returning by ship from Europe in 1832, Morse met Charles Thomas Jackson of Boston, a man who was well schooled in electromagnetism. Witnessing various experiments with Jackson’s electromagnet, Morse developed the single-wire telegraph and submitted a patent application which is now part of the collections of the National Museum of American History at the Smithsonian Institution.

Morse spent eleven years perfecting the telegraph and was convinced that it was destined to make instant communication between all parts of the globe a reality. Though Morse was penniless and frequently hungry during that time, he wrote, “I am perfectly satisfied that, mysterious as it may seem to me, it has all been ordered in view of my Heavenly Father’s guiding hand.?

He tried to get Congressional appropriation to fund the construction of an experimental telegraph but congressmen believed his machine was an elaborate hoax. In legislative debate, some representatives had suggested that if the telegraph were to be funded, there ought to be an appropriation for experiments in mesmerism, too.

On March 3, the final day of the legislative session, more than 140 bills stood in line ahead of Morse’s on the Senate calendar. Highly placed friends told the inventor to prepare for disappointment, as there was little chance his bill would be taken up. After paying his hotel bill at the end of the day, Morse discovered that he had enough money to buy his rail ticket home to New York, and only 37 and ? cents more.

The next morning before breakfast, Annie Ellsworth, daughter of the U.S. Commissioner of Patents, was waiting to see him and she congratulated him on the passage of his bill. He assured her she must be mistaken, but she insisted that her father had seen the President sign his name to the bill.

So astonished he couldn’t speak, Morse eventually blurted out, “Annie? I am going to make you a promise; the first dispatch on the completed line from Washington to Baltimore shall be yours.? Morse kept his promise, and Annie’s choice was the last phrase of Numbers 23:23:

Morse got the grant from Congress for $30,000 to build and experimental telegraph between Baltimore and Washington, D. C., a distance of 40 miles and Morse’s first public message, “What hath God wrought!? was sent on May 24, 1844

Morse wrote to his brother Sidney:

“What hath God wrought, seemed divinely inspired. “It is His work, and He alone carried me thus far through all my trials and enabled me to triumph over the obstacles, physical and moral, which opposed me. ?Not unto us, not unto us, by to Thy name, O Lord, be all the praise.’

By 1874, thirty years after the experimental line was built, the worldwide communications network Morse had envisioned had become reality, with 650,000 miles of telegraph wire and 30,000 miles of submarine cable connecting cities across the globe.

After the transatlantic telegraph cable was installed, he said:

“The more I contemplate this great undertaking, the more I feel my own littleness, and the more I perceive the hand of God in it, and how he has assigned to various persons their duties, he being the great controller, all others his honored instruments. No single human being can appropriate to himself the exclusive honors of this enterprise, for in no human being do the various and almost opposite qualities exist necessary to be combined before it can be consummated. Hence our dependence first of all on God, then on each other.”

Characteristically, Morse had given the first $25 he had earned from the telegraph to a Sunday school.

One of the last acts of his life was to endow a lectureship on the relation of the Bible to the sciences.

He saw a perfect harmony between the Word of God, the beauty of the landscapes he painted, and the scientific endeavors he undertook. After a long and successful career, Morse said, “The nearer I approach the end of my pilgrimage, the clearer is the evidence of the divine origin of the Bible, the grandeur and sublimity of God’s remedy for fallen man are more appreciated, and the future is illumined with hope and joy.?