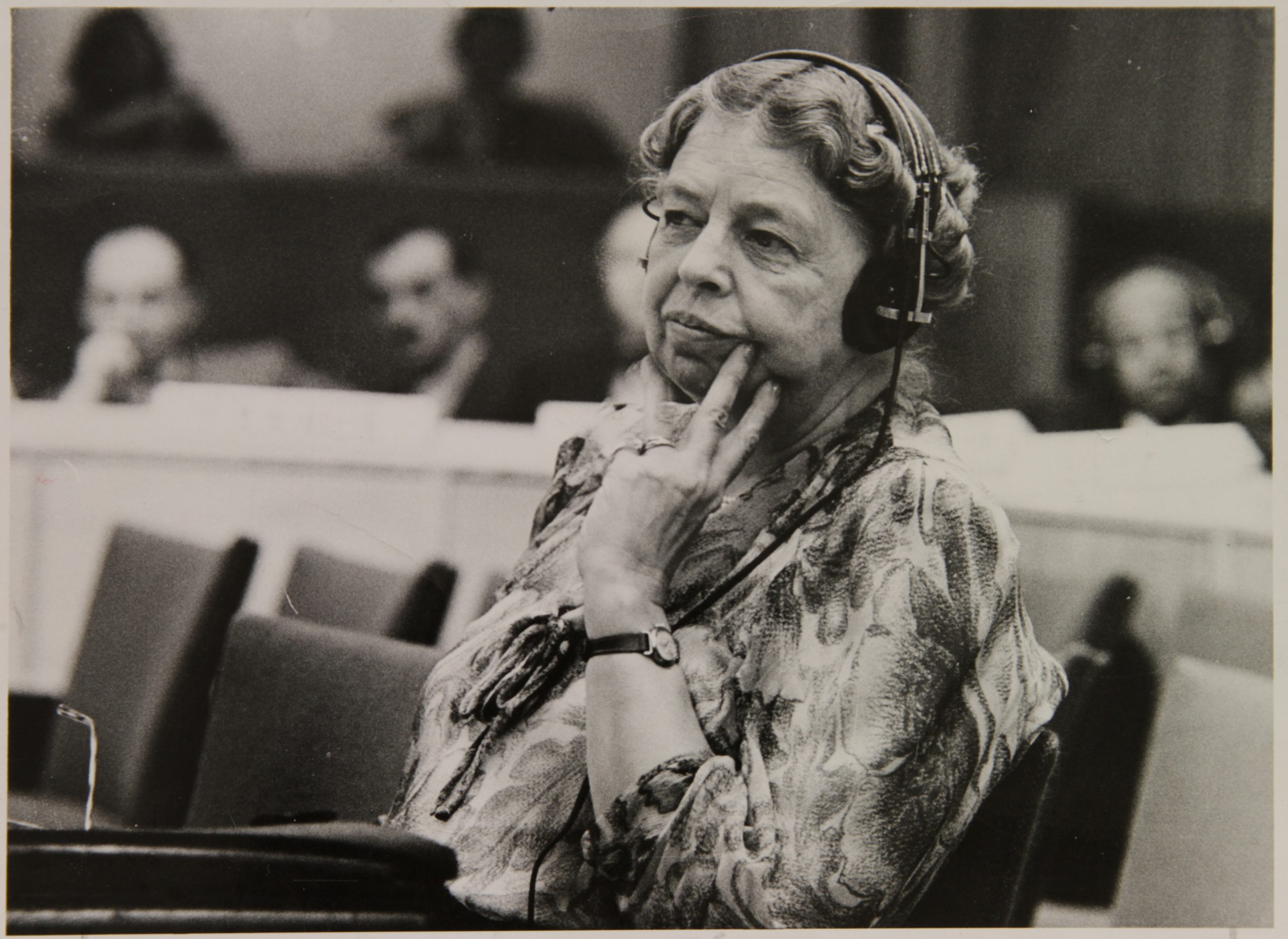 A lot of press was given to U.S. Secretary of State Hillary Clinton’s response to a Congolese university student when she said:

“Wait. You want me to tell you what my husband thinks? My husband is not the secretary of state; I am. So you ask my opinion, I will tell you my opinion. I’m not going to be channeling my husband.”

Obviously she was attempting to “hold her ground” as an individual other than the “Billary” entity she was branded but it is a bit interesting to wonder how the new age word “channeling” slipped into her vocabulary.

After the box office success of the movie, “The Secret” and over 40 some odd years since the advent of the New Age Movement, the word “channeling” has seeped into much everyday conversation.

But, how does this word filter down into a Methodist political figure’s vocabulary?

A little playful research may undercover the source:

Hillary Clinton first heard Billy Graham in 1971 at the Northern California Crusade. Later they met in person in 1989 while he was preaching in Little Rock, Arkansas and Graham was known to have helped Hillary during the Monica Lewinsky scandal. She says, “Graham was “incredibly supportive to me personally. And he was very strong in saying, ‘I really understand what you’re doing and I support you.’ He was just very personally there for me.” Time.com

There is really nothing New Age about Billy Graham except for a slightly unconventional for Christianity yet popular book he wrote called: Angels: God’s Secret Agents .

“He says, “I believe in angels because the Bible says there are angels.” Graham found over 300 references to angels in the Bible.” To Graham, the most important characteristic of angels is that they work hard on our behalf, striving to assist us in times of danger or hardship. It should be pointed out that Graham never suggests that his readers cultivate relationships with angels. His principal message is that angels witness how we walk through life.” “Spiritual, but not Religious” by Robert C. Fuller

No channeling angels or husbands here.

In 1994: “President Clinton and his wife, Hillary, invited a group of popular self-help writers to Camp David to help them dissect what had happened in the first two years of the presidency and to search for a way back after the Democrat’s devastating loss to the Republicans in the 1994 congressional elections. They met the weekend beginning Friday, Dec. 30, 1994.”

“Bill and I had met Marianne Williamson . . . at one of our Renaissance weekends, and she [Williamson] had suggested we get together with a group of people outside the political world to discuss Bill’s goals for the remaining two years of his term. That struck a chord with me, and we invited her to convene a gathering at Camp David on December 30 and 31 “Williamson’s guest list included Tony Robbins . . . and Stephen R. Covey . . . I figured if millions of Americans were listening to their advice, I figured it might help to hear what they had to say. Williamson also invited Mary Catherine Bateson and Jean Houston. . . . I found myself engrossed in hours of conversation with Mary Catherine [Bateson] and Jean Houston . . . Jean wraps herself in brightly colored capes and caftans and dominates the room with her larger-than-life-presence and crackling wit. She is a walking encyclopedia . . . She is also a trove of great jokes and puns and is ready to share her cache with anyone in need of a good laugh.” “Hillary’s New Age Strategists” by Attorney Constance Cumbey

So, let’s see if any of the attendees had anything to do with channeling.

“Houston taught at Columbia University and the New York School of Social Research. She collaborated with her husband, Robert E. L. Masters, on the book The Varieties of Psychedelic Experience (1966). Together the couple organized the Foundation for Mind Research in New York in 1964 to conduct experiments on the borderland between mental and psychical experiences.

Jean Houston received negative media attention in 1996 for her work with Hillary Clinton. She was attacked by her contemporaries as a medium attempting to channel the likes of Eleanor Roosevelt and Gandhi, when in fact Houston’s technique resembled more a brainstorming session. This is a session in which the patient explores the inner self through various exercises.” Answers.com

“In Newsweek, Bob Woodward of Watergate fame wrote a sensationalistic account about Dr. Houston and Mrs. Clinton’s two-sided imaginary conversations with Mrs. Roosevelt. However, in a follow-up story about Dr. Houston in Newsweek, Kenneth L. Woodward (no relation), the long-time religion editor of Newsweek, pointed out that spiritual directors in the Roman Catholic tradition had recommended this kind of practice for many people on retreats. As he noted, instructions for carrying on such a two-sided colloquy with ancient biblical personages such as Jesus can be found in the Spiritual Exercises of St. Ignatius of Loyola , a famous spiritual director and the founder of the Society of Jesus religious order. As this example shows, Houston can be styled a spiritual director in the tradition of St. Ignatius of Loyola.

“Houston was perhaps formerly best known for her involvement with renowned cultural anthropologist Margaret Mead, during Mead’s final years, as well as many other prominent figures including French philosopher Pierre Teilhard de Chardin and Dr. Jonas Salk, best known for winning the Noble Prize in medicine for his discovery of the polio vaccine.” Wikipedia.com

No use of the word channeling.

“Anthony Robbins is an American self-help writer and professional speaker who has been active for over 30 years. He became well known through his infomercials and bestselling self-help books, Unlimited Power: The New Science Of Personal Achievement and Awaken The Giant Within.” Wikipedia

Except for his fire-walking stints and the use of NLP (Neuro-Linguistic Programming), no use of the word channeling.

“Stephen R. Covey wrote the best-selling book, The Seven Habits of Highly Effective People . As a practicing member of The Church of Jesus Christ of Latter-day Saints, Stephen Covey has authored several devotional works for Latter-day Saint or Mormon reader.”

Definitely no use of the word channel here either.

“Williamson is a minister in the Unity Church. The driving force behind her philosophy is to offer a New Thought approach to spirituality.”

“Her earliest renown was for her talks on A Course in Miracles, a step-by-step method for choosing love over fear. She credits her breakthrough to Oprah Winfrey, who invited her on to The Oprah Winfrey Show to discuss Williamson’s first book, A Return to Love , a book of which Oprah bought one thousand copies.”

A Return to Love: Reflections on the Principles of A Course in Miracles is the first book by author Marianne Williamson and is to date the biggest selling book of interpretation of the spiritual thought system found in the book A Course In Miracles.

No obvious use of the word channeling until we research the book, A Course in Miracles .

The “channeled” text of  A Course in Miracles

A Course in Miracles began with the sudden decision of two people to join in a common goal. Their names were Helen Schucman and William Thetford, Professors of Medical Psychology at Columbia University’s College of Physicians and Surgeons in New York City. They were anything but spiritual. Their relationship with each other was difficult and often strained, and they were concerned with personal and professional acceptance and status. In general, they had considerable investment in the values of the world. Their lives were hardly in accord with anything that the Course advocates. Helen, the one who received the material, describes herself:

“Psychologist, educator, conservative in theory and atheistic in belief, I was working in a prestigious and highly academic setting. And then something happened that triggered a chain of events I could never have predicted. The head of my department unexpectedly announced that he was tired of the angry and aggressive feelings our attitudes reflected, and concluded that, ‘there must be another way.’ As if on cue I agreed to help him find it. Apparently this Course is the other way.”

Although their intention was serious, they had great difficulty in starting out on their joint venture. But they had given the Holy Spirit the “little willingness” that, as the Course itself was to emphasize again and again, is sufficient to enable Him to use any situation for His purposes and provide it with His power.

“Three startling months preceded the actual writing, during which time Bill suggested that I write down the highly symbolic dreams and descriptions of the strange images that were coming to me. Although I had grown more accustomed to the unexpected by that time, I was still very surprised when I wrote, “This is a course in miracles.” That was my introduction to the Voice. It made no sound, but seemed to be giving me a kind of rapid, inner dictation which I took down in a shorthand notebook. The writing was never automatic. It could be interrupted at any time and later picked up again. It made me very uncomfortable, but it never seriously occurred to me to stop.

The names of the collaborators in the recording of the Course do not appear on the cover because the Course can and should stand on its own. It is not intended to become the basis for another cult. Its only purpose is to provide a way in which some people will be able to find their own Internal Teacher.

Here we finally find a “channeled” text Marianne Williamson revived in her book, A Return to Love.

Angel Popularity on the Rise by Fr. John A. Hardon, S.J.

A Course in Miracles