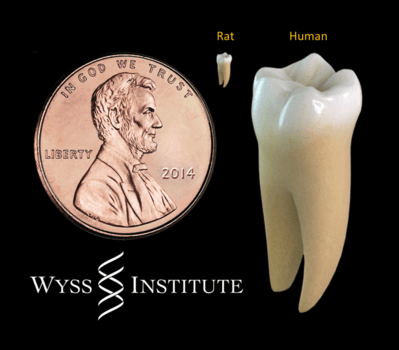 Though teeth have been grown in pigs, mice and “in vitro,” scientists had yet to figure out how to repair a damaged tooth except through classic drilling and filling until now. A Harvard-led team is the first to use a low-power laser to trigger the human dental stem cells to form dentin.

The Wyss Institute on May 28, 2014, announced in the study, “Photoactivation of Endogenous Latent Transforming Growth Facto Directs Dental Stem Cell Differentiation for Regeneration, published in Science Translational Medicine, that this new research will lay the foundation not only for many clinical applications in restorative dentistry but even will be applied to heal wounds and bones in the future.

A number of biologically active molecules, such as regulatory proteins called growth factors, can trigger stem cells to differentiate into different cell types. Current regeneration efforts require scientists to isolate stem cells from the body, manipulate them in a laboratory, and return them to the body efforts that face a host of regulatory and technical hurdles to their clinical translation. But Mooney’s approach is different and, he hopes, easier to get into the hands of practising clinicians.

“Our treatment modality does not introduce anything new to the body, and lasers are routinely used in medicine and dentistry, so the barriers to clinical translation are low, it would be a substantial advance in the field if we can regenerate teeth rather than replace them.”

The study began with Praveen Arany, D.D.S., PhD Assistant Clinical Investigator at the National Institutes of Health (NIH) who took rodents and drilled holes in their molars and treated the tooth pulp that contains adult dental stem cells with low-dose laser treatments. He then made temporary caps and made sure the animals were comfortable and healthy. After about 12 weeks, high-resolution x-ray imaging and microscopy confirmed that the laser treatments triggered dentin formation.

“It was definitely my first time doing rodent dentistry,” said Arany, who had quite a few technical challenges performing oral surgery on such a small scale. The dentin bridge that is easy to locate in human teeth wasn’t as easy in rodent teeth.

To figure out the exact mechanism they did some culture-based experiments and found a cell protein called transforming growth factor beta-1 (TGF-?1) is what triggered the dental stem cells to grow into dentin. To be more specific, the laser made these chemically active molecules containing oxygen which triggered latent TGF-?1complex which then differentiated the stem cells into dentin.

The reason why this is so important is that it is the first time scientists have figured out the exact process of how low-level laser treatments work on a molecular level. Since the 1960s many anecdotes circulate the newswires about how low-level light therapy can stimulate all kinds of biological processes, like growing hair and repairing skin but the clinical trials were never consistent. This study puts those rumors to rest and places low-level light therapy on a firm scientific foundation.

The researchers will be taking this to human clinical trials in the future and they will also be looking at different approaches to using stem cells to regenerate other tissues in the body.