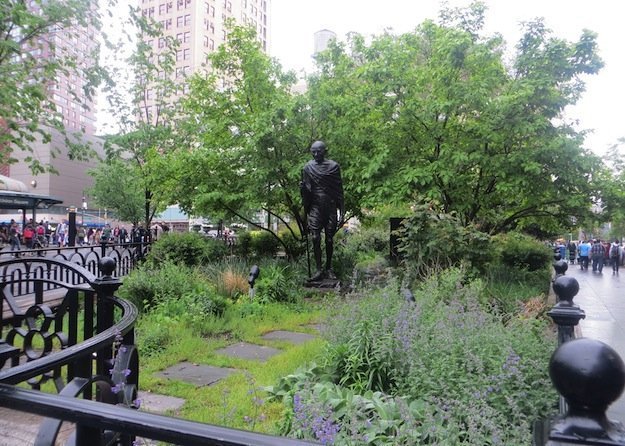 It’s strange to see a statue of Gandhi set in small but lush landscape in Union Square Park in NYC, its even stranger to think that Gandhi got his start as a teacher and spiritual leader through his connection with the Theosophists.

This statue was placed in Union Square Park in 1986 as part of a project to honor the “defenders of freedom”; Union Square was chosen for the statue of Gandhi because of the parks past association with protest and human rights.

It isn’t a well known fact that Gandhi studied the books by leading theosophists Madame Blavatsky and Annie Besant as a young man in South Africa. And though he didn’t actually become part of the Johannesburg Lodge, it was with his fellow theosophists in a sort of seeker’s club that Gandhi first came into contact with “The Bhagavad Gita”; a Hindu scripture that eventually guided the rest of Gandhi’s life.

Gandhi took from Theosophy the concept of “universal brotherhood and consequent toleration” and left the more “secret” and “occult” aspects of Theosophy aside.

Gandhi wrote in his journal, “Harijan“, the following that was published in the issue on the day he was assassinated, January 30, 1948:

“I have come to the conclusion that the Theosophy is Hinduism in theory, and that Hinduism is Theosophy in practice.”

“There are many admirable works in Theosophical literature, which one may read with the greatest profit; but it appears to me that too much stress has been laid upon mental and intellectual studies: upon argument, upon the development of occult powers, and that the central idea of theosophy, the brotherhood of mankind and the moral growth of man has been lost sight of in these.”

“Hindu sages have told us that to live the life, no matter how hampered it might be, no matter with what limitations, is infinitely superior to having a mental grasp of things Divine. They have taught us that until, one by one and step by step, we have woven these things into our lives, we would not be able to have a grasp of the whole of the Divine teaching; and so, if you want to live the real life, it is not to be lived in Theosophical libraries, but it is to be lived in the world around you, in the real practice of the little teaching that you might have been able to grasp.”

It is encouraging to know that living our hectic and challenging lives is “infinitely more superior” than cloistering ourselves in studies to reach the Divine. 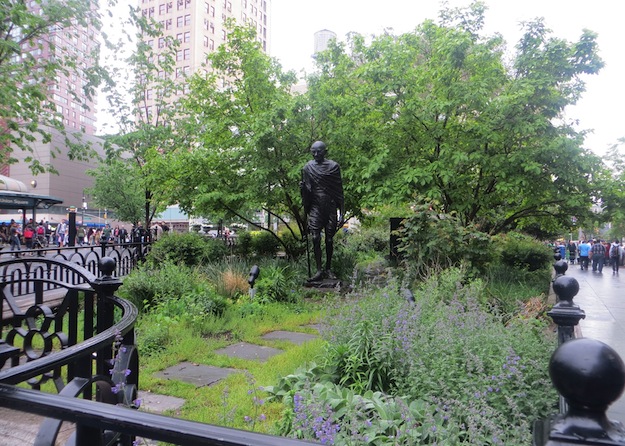 Article Name
Gandhi Theosophy and Union Square Park in NYC
Description
This statue was placed in Union Square Park in 1986 as part of a project to honor the "defenders of freedom"; Union Square was chosen for the statue of Gandhi because of the parks past association with protest and human rights.
Author
Tima Vlasto
Publisher Name
Cool Wisdom Books
34
SHARES
ShareTweet