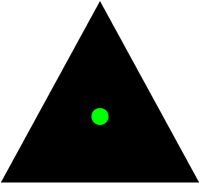 On February 1st 1996, at Mpath’s Internet Game Developers Conference in San Jose, California a video game developer named Brain Moriarty gave an amazing lecture “to a crowd that seemingly grew smaller and smaller as he talked on.” “The Point Is,” (1996) is a virtual and hypnotic roller-coaster ride that starts from a point of light, passes through concepts about marketing video games and cunningly transports one’s consciousness to the spiritual dimension of the World Wide Web.

In a completely dark conference room with a laser beam focused on a dime-sized dot of reflective plastic; a dot that “twinkled and scintillated” to live narration and recorded music at “room-shaking volume;” Brian Moriarty mesmerizes his audience with his out-of-the-box visionary message and embraced everything from video games, the future of the WWW, consciousness and our connection to each other in this space-time reality.

The lecture he says, “is an experiment in attentiveness.” Mr. Moriarty uncovers the possibilities of the internet, its primitive technology, the source of its popularity and jokingly the future of a modem as “doorstop.”  From the Web’s loneliness to multi-player games, he quantum leaps to virtual reality and presence. He frees the mind from the constraints of this time-space reality and embraces the “Strangeness” of mind and imagination. He reminds us of our ancient civilizations understanding of a Self that is not separate but connected, a “network of minds” and a “web of souls,” just as the Web is today.

By using the Web, by thinking about its possibilities, and especially by helping to build the Web, you are changing the way you realize the world.
You are changing your mind about the world.
The Web isn’t just something that is happening in the world.
It’s something that’s happening in you.
When people set up email accounts or personal Web sites or join chat rooms or create MUD personas, what are they doing, really?
They are saying to the world, I Am.
I Am.
I signify. I am part of a larger community.
I am part of something bigger than myself.
These are empowering acts.
These acts are an expression of hope.
These are spiritual acts.
Why is a game designer talking to you about spirituality?