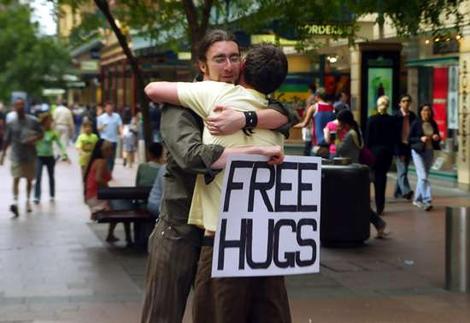 “Sometimes, a hug is all that we need.”

Juan Mann started the Free Hugs Campaign simply because he needed cheering up one day in 2004 when he had to leave London and return to his hometown of Sydney with only a bag full of clothes and no one waiting for him at the airport.

As he says in his own words:

“Standing there in the arrivals terminal, watching other passengers meeting their waiting friends and family, with open arms and smiling faces, hugging and laughing together, I wanted someone out there to be waiting for me. To be happy to see me. To smile at me. To hug me. So I got some cardboard and a marker and made a sign. I found the busiest pedestrian intersection in the city and held that sign aloft, with the words “Free Hugs” on both sides.”

Juan Mann and Shimon Moore, the lead singer for Sick Puppies, became friends at some point. Shimon recorded video footage of Juan and his fellow “free huggers” in 2004, but it wasn’t until 2006 (when Mann’s grandmother died), that Shimon made the music video and sent it to him.

It became a YouTube sensation that grew into a kindness initiative which currently has spread to over 80 countries around the world.

Mann says the campaign is “about many things, like making someone’s day a little brighter, meeting people and showing the world that strangers aren’t so bad after all. It’s also about bringing people together and sharing a happy moment before heading back out into the world feeling a little lighter.”

The International Free Hugs Day is the first Saturday of July. This year it falls on Independence Day for us in the United States (July 4th, 2009). Guess there will be more than fireworks this weekend!

Mata Amritanandamayi (the hugging saint), who in 2006 was honored with the 4th Annual James Parks Morton Interfaith Award at the Interfaith Centre in New York has said, “Only when human beings are able to perceive and acknowledge the Self in each other can there be real peace.”

The Illustrated Guide to Free Hugs