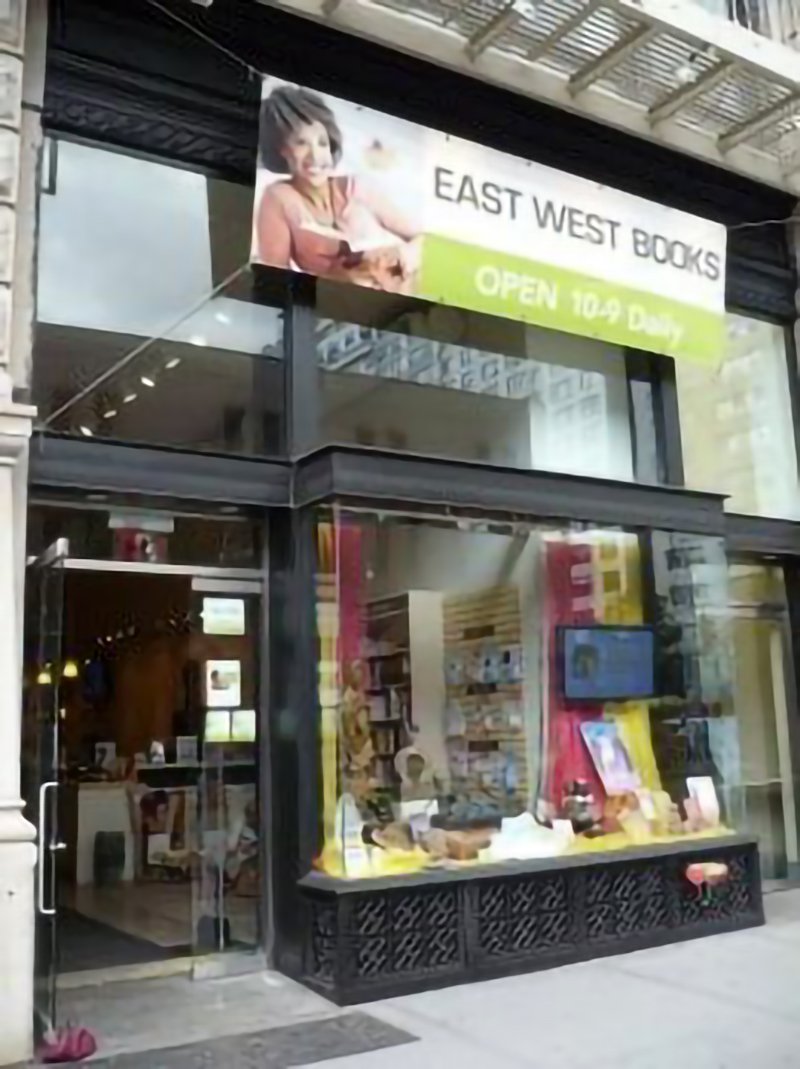 On June 30th, 2010 at 5:00 pm East West Living Bookstore in New York City closed its doors on Fifth Avenue after faithfully serving the spiritual needs and growth of New Yorkers for over 30 years. Considered one of New York City’s most relaxing bookstores (see Time Out Magazine New York), this haven of inspiration, solace and catharsis will no longer whisk trails Himalayan incense down 14th Street and Fifth Avenue and no longer open its doors to those rare seekers of Truth or those sensitive souls beaten down by the fast pace and chaos of NYC who sought knowledge, guidance and healing on those bookstore shelves.

The store was originally opened and funded by the Himalayan Institute whose founder, Swami Rama, left his position as a Shankarcharya (Hindu philosopher and teacher of Vedanta philosophy) in 1969 “to bridge the gap between East and West, spirituality and science, ancient wisdom and modern technology.”

“He is especially notable as one of the first yogis to allow himself to be studied by Western scientists. In the 1960s he allowed himself to be examined by scientists at the Menninger Clinic who studied his ability to voluntarily control bodily processes (such as heartbeat, blood pressure, body temperature, etc.) that are normally considered to be non-voluntary (autonomic).” Wikipedia

Though revered by many, as is the case with many gurus, there was a fair share of scandal. The most well-known are: The Case Against Swami Rama of the Himalayas and another revealed by his only son, Robert Walter in his book, Son of a Swami: A Life of Lies. He states:

“Along the way, mother and son expose Swami Rama’s double life as a revered guru with millions of admirers, and an accomplished con artist who had sex with dozens of his disciples and lived lavishly at his students’ expense.”

One could assume that East West Bookstore survived so many years at its Fifth Avenue location (a prime piece of Manhattan real estate) due to the Himalayan Institute’s students and followers contributions. It could also be wagered that it survived after Swami Rama’s death in 1996 due to funding from the Himalayan Institute until that most likely ran out.

The redesigned interior and a cafe/restaurant upstairs made East West Bookstore more of an oasis to hang-out and heal in with its free WiFi, seminars, yoga classes, book signings and eventual art gallery. With its modernization, the more arcane and rare mystical books were replaced by their more modern watered-down counterparts and those cryptic and rare jewels of spiritual wisdom in rare old books progressively faded and easy to profit from over-priced crystals took their place.

The yoga studio closed and the CoSM art gallery, housing Alex Grey’s works saw its last days. Gone is the wonderful restaurant upstairs with delicious gourmet vegetarian meals and crystal laden teas to packaged wraps and water. The once over-laden bookshelves of the ’70s and 80’s dwindled to “re-spirited” books donated by benefactors (strangely echoing the rich variety once found in the days of East West’s beginnings).

Though fans of East West and the staff tried valiantly to “keep the faith” it became clear soon enough that surviving in New York City needs more than good intentions and paying a Fifth Avenue rent means “independent bookstores” move to other neighborhoods. A better business model or a less expensive location may bring East West Books back to life. Let’s hope for the best. 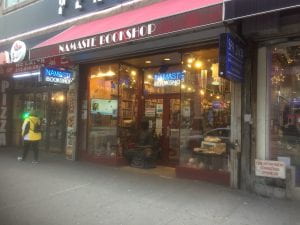 Namaste Bookshop located at 2 W. 14th Street (between 5th and 6th Avenue) was founded on November 21, 2010. Namaste filled a void left by East West Books, which closed its doors on June 30, 2010 over 30 years after it was founded by the Himalayan Institute.

Namaste Bookshop sells books pertaining to a wide variety of religious and cultural traditions, as well as statuary, incense, tarot cards, and crystals (stones). In early 2018, the shop expanded to a storefront two doors down, called Namaste Crystal Shop. In addition, the Namaste Healing Center sits on 5th Avenue, around the corner from the bookshop. These three spaces serve distinct but related purposes.

Namaste Bookshop also hosts many special events, classes, and book signings every week and also has a daily schedule of Readers and Practitioners which include Psychic, Tarot, Astrology, & Reiki.

Namaste Crystal Shop, located on 6 W. 14th Street (Just a few doors down from the bookshop) is their newest store. This space is an extension of Namaste Bookshop and carries even more crystals, oils, soaps, and home goods products.