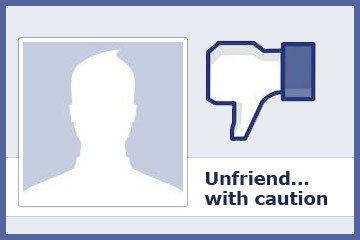 University of Colorado Denver in a press release on April 22, 2014, reports the results of two studies published in the 2014 47th Hawaii International Conference on System Sciences on the most common type of `friend’ to be unfriended on Facebook and how “unfriending” them effects them emotionally.

Our high school friends were our first choices according to Christopher Sibona, a doctoral student in the Computer Science and Information Systems program at the CU Denver Business School.

Both studies were based on a survey of 1,077 people conducted on Twitter.

The first study found that the top five kinds of people respondents unfriended were:

Sibona believes that high school friends political and religious beliefs may not have been as strong when they were younger. And if those beliefs have grown more strident over time, it becomes easier to offend others.

“Your high school friends may not know your current political or religious beliefs and you may be quite vocal about them,” Sibona said. “And one thing about social media is that online disagreements escalate much more quickly.”

His second study examined the emotional impact of being unfriended.

The most common responses to being unfriended were:

“The strongest predictor is how close you were when the unfriending happened,” said Sibona, If the unfriended person was once a close friend and the person monitored their own friend’s list, it hurt more.

Surprisingly, unfriending happened most between people who were once close rather than simple acquaintances.

If difficulties were discussed before the unfriending and if the person unfriended talked about it with others after, it had more of a negative impact.

In our online virtual world of social connections, it might not seem much to click that mouse and unfriend someone. We might not be so easy-going about unfriending offline. The study does shed light and reminds us, you are dealing with a flesh and blood person with feelings.

“If you have a lot of friends on Facebook, the cost of maintaining those friendships is pretty low,” Sibona said. “So if you make a conscious effort to push a button to get rid of someone, that can hurt.”