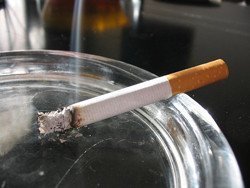 01 Nov Are the new FSC fire-safe cigarettes making smokers sicker than ever?

After lighting up are you experiencing more headaches, stomach cramps or a coppery taste in your mouth? Does your new FSC (fire-safe cigarette) taste bad, cause dry mouth and are you coughing more?

New York State was one of the first states to require that cigarettes be made with the new fire-safe paper. This paper is constructed by glueing two or three thin bands of less-porous paper together with an ethylene vinyl acetate copolymer emulsion based adhesive (carpet glue).

These papers have bands (see image) that act as speed bumps, so if the cigarette is left unattended it will self-extinguish. The coalitions that passed these laws believe that these cigarettes would limit the number of cigarette fire deaths.

Though this law was passed in 2004, the number of deaths caused by fires from cigarettes hasn’t been greatly reduced, but complaints from smokers all over the U.S have multiplied.

Symptoms include:
Nausea, sores in mouth and throat, dry throat, constant headaches, extreme coughing, tightness in the chest, vomiting, body aches, pain in the abdomen and respiratory conditions including asthma and bronchitis.

The firesafecigarette.org website mentions a study by the Harvard School of Public Health:

Essentially, what they are saying is that since cigarettes are already toxic, let’s make them more toxic.

The real numbers from the study are:

“The Harvard School of Health reported that when comparing NY Cigarettes (FSC) versus Regular Cigarettes, the FSC cigarettes produced 13.9% more Naphthalene and 11.4% more carbon monoxide than regular cigarettes. Naphthalene is commonly found in moth balls, and exposure in high amounts can result in headache, nausea, vomiting, diarrhea, malaise, confusion, anemia, jaundice, convulsions, and coma. Therefore, it has been proven that FSC cigarettes contain higher levels of chemicals that are harmful to smokers.”

You can identify these packs of cigarettes by the FSC above the barcode. For now, over 30 states have enacted this law and soon the entire country.

Some smokers have opted to RYO (roll your own) or MYO (make your own) by purchasing rolling tobacco, cigarettes tubes with the filter attached and inexpensive injection machines. Most of these smokers mention that after switching to rolled cigarettes; the symptoms subsided after a few days.

The question is, when and if, the FSC laws will be applied to rolling papers as well.

These “speed bumps” on the cigarette paper can be easily identified (darker color) if you hold the paper up to the light.

Though tobacco was used as a medicinal and ceremonial plant among many indigenous tribes around the world and maybe should have remained a plant for special occasions, devotion and healing, its present-day over-use and abuse has spurned the Dark Ages for this very sacred plant.

Now, carpet glue has been added to the mix. On the plus side, it has made smokers return to the more ceremonial use of tobacco; it takes time, effort and attention to roll a cigarette, even when using a special rolling machine. The Spirit of Tobacco may not have been pleased with our present-day indulgence and inattention. It takes a carpet glue scare to guide us back to a more sober use.

Fire Safe Cigarettes – Or – Smokers as Lab Experiments on YouTube

Scientific study reveals the handwriting of a liar