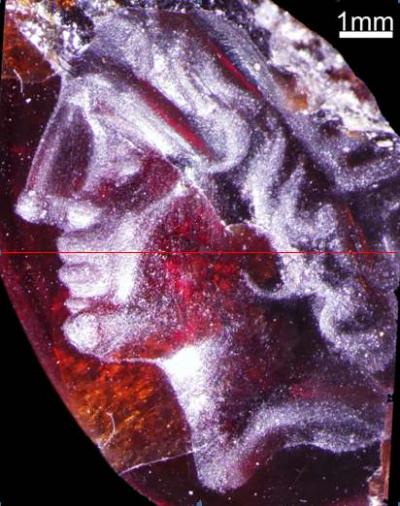 Dr. Gilboa, Chair of the Department of Archaeology at the University of Haifa says:

“The emperor is portrayed as young and forceful, with a strong chin, straight nose and long curly hair held in place by a diadem.”

This discovery is unique in that it revealed:

1. There were local elite in the area that could afford works by master artists (such as the work on this gemstone). Up until this day, master art could only be afforded by the leading Hellenistic courts in the capital cities, such as Alexandria and Seleucia.

2. It is the first Alexander portrait that can be traced to a specific origin. (Most portraits of Alexander are of unknown origin, belonged to collections before the advent of scientific archaeology or acquired on the black market.

Alexander the Great passed through Dor in 332 B.C.E. on his way to Egypt. It appears the city submitted to Alexander without resistance and Dor remained a Hellenic center in the land of Israel until Alexander Janneus in 100 B.C.E.

There exists the theory that Alexander was one of the first rulers to use his image as propaganda, depicting himself as beautiful (according to Hellenistic art) as a royal (the diadem in the portrait) and used divine elements from Eastern and Hellenistic art. The portraits were distributed throughout the empire on statues, mosaics, coins and seals. Later Hellenistic rulers commissioned self-portraits of themselves in the image of Alexander as a propaganda tool as well.

As an aside, there is great story about Diogenes the Cynic Philosopher and Alexander the Great from the Greek orator, Dio Cocceianus (ca. 40?ca. 120)

“In the fourth Discourse Alexander the Great is represented as conversing with Diogenes, who tells him that the real king is a son of Zeus even as Homer says. Then he goes on to give the Cynic doctrine that this sonship is evidenced by qualities of mind and character, not by military power and wide dominion. He concludes by picturing graphically the spirit of avarice, the spirit of the love of pleasure, and the spirit of ambition, which rule the lives of ordinary men. “

The story goes as follows (full text here) : (It’s a bit long but well worth reading in original form rather than paraphrasing)

The day Diogenes gives Alexander the Great a compliment by calling him a bastard or rather taught Alexander what has true value: The light of wisdom or spoils of war?

14 On that day it happened that Diogenes was all alone in the Craneion, for he had no pupils at all nor any such crowd about him as the sophists and flue-players and choral masters have. So the king came up to him as he sat there and greeted him, whereat the other looked up at him with terrible glare like that of a lion and ordered him to step aside a little, for Diogenes happened to be warming himself in the sun.
15 Now Alexander was at once delighted with the man’s boldness and composure in not being awestruck in his presence. For it is somehow natural for the courageous to love the courageous, while cowards eye them with misgiving and hate them as enemies, but welcome the base and like them. And so to the one class truth and frankness are the most agreeable things in the world, to the other, flattery and deceit. The latter lend a willing ear to those who in their intercourse seek to please, the former, to those who have regard for the truth.
16 Then after a brief pause Diogenes asked the king who he was and what object he had in coming to him. “Was it,” he said, “to take some of my property?” “Why, have you any property?” replied the other; “do you own anything that you might share with one?” “Much indeed,” he replied, “and very valuable, in which I do not at all feel sure that you will ever be able to have a share. Yet it is not glaives or cauldrons or mixing-bowls or couches and tables such as Darius is reported by some writers to possess in Persia that I happen to own.”
17 “What,” retorted the other, “do you not know Alexander the king?” “I hear many speak his name, to be sure,” said he, “like so many jackdaws flitting about, but the man I know not, for I am not acquainted with his mind.” “But now,” came the answer, “you shall know his mind also, since I have come for the very purpose of letting you know me thoroughly and of seeing you.”
18 “Well, it would be hard for you to see me,” rejoined the other, “just as it is for men with weak eyes to see the light. But tell me this: are you the Alexander whom they call a bastard?” At this the king flushed and showed anger, but he controlled himself and regretted that he had deigned to enter into conversation with a man who was both rude and an impostor,? as he thought.
19 Diogenes, however, marking his embarrassment, would fain change his throw just like men playing at dice. So when the king said, “What gave you the idea of calling me a bastard?” he replied, “What gave it? Why, I hear that your own mother says this of you. Or is it not Olympias who said that Philip is not your father, as it happens, but a dragon or Ammon or some god or other or demigod or wild animal? And yet in that case you would certainly be a bastard.”
20 Thereupon Alexander smiled and was pleased as never before, thinking that Diogenes, so far from being rude, was the most tactful of men and the only one who really knew how to pay a compliment.

The Text of Dio Chrysostom on LacusCurtius

Photo Credit:This is an engraved gemstone carrying a portrait of Alexander the Great. The gemstone was found in the course of recent excavations at Tel Dor. No’a Raban-Gerstel, University of Haifa