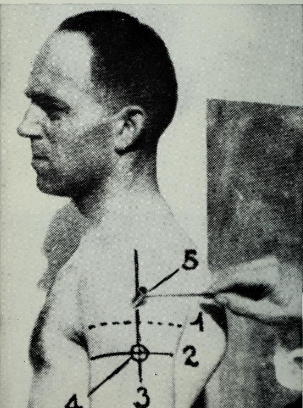 Excerpt from Psychic discoveries behind the Iron Curtain by Ostrander, Sheila; Schroeder, Lynn

Make yourself psychic with acupuncture?

Some Communist scientists think it’s possible. Mediums say you can expand your consciousness via the human energy body. Evidence seems to suggest that often telepathic information appears to be picked up by our bodies but never reaches our conscious awareness. By stimulating certain centers in the body with drugs or exercises, it might be possible to make conscious the incoming ESP. Indian philosophy as well as many clairvoyants hold that psychic force functions through certain glands—mainly the pituitary and the pineal.

We met scientists in both Czechoslovakia and Russia who suspect that since specific acupuncture points can command the bioplasmic energy flow passing through organs, glands, and the brain, possibly psychic force can be stimulated with acupuncture.

We were shown several photographs by scientists detailing acupuncture points on the upper arm. “By stimulating these points with needles a person’s psychic ability may be heightened,” they said. “But don’t try it unless you have a trained acupuncturist.” 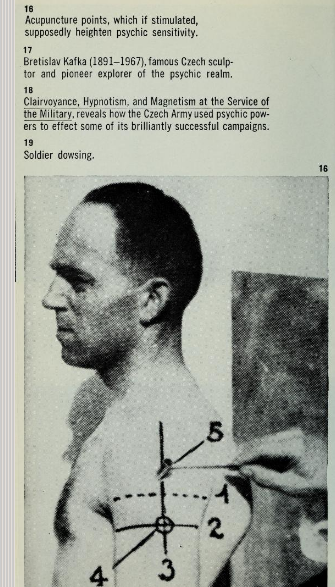 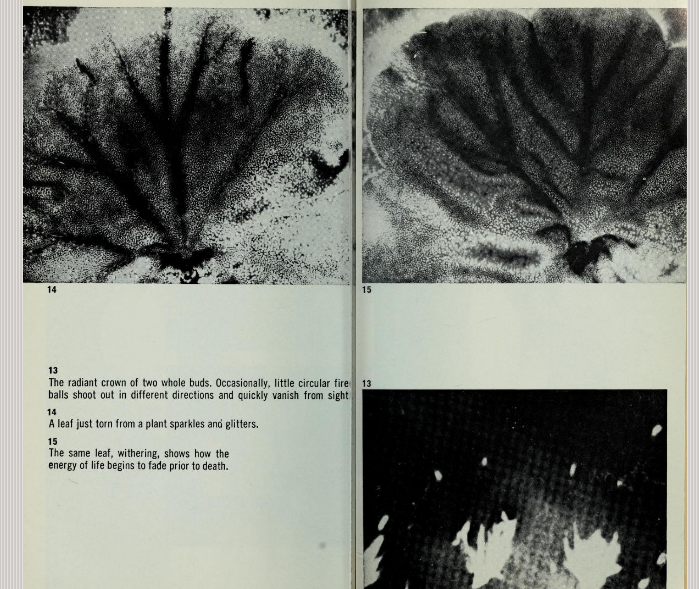 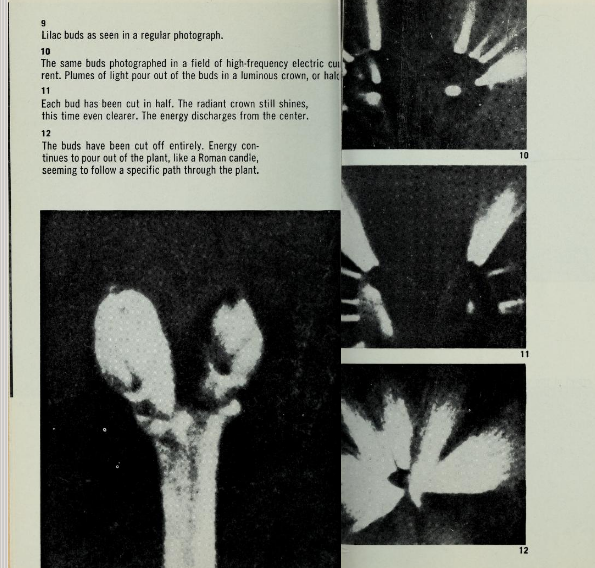 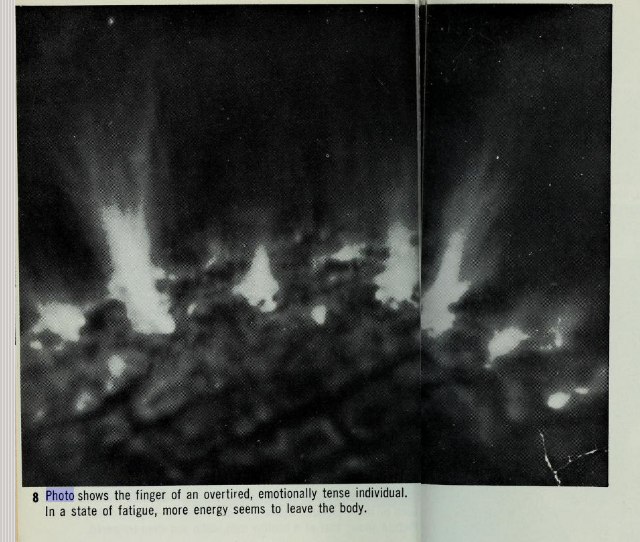 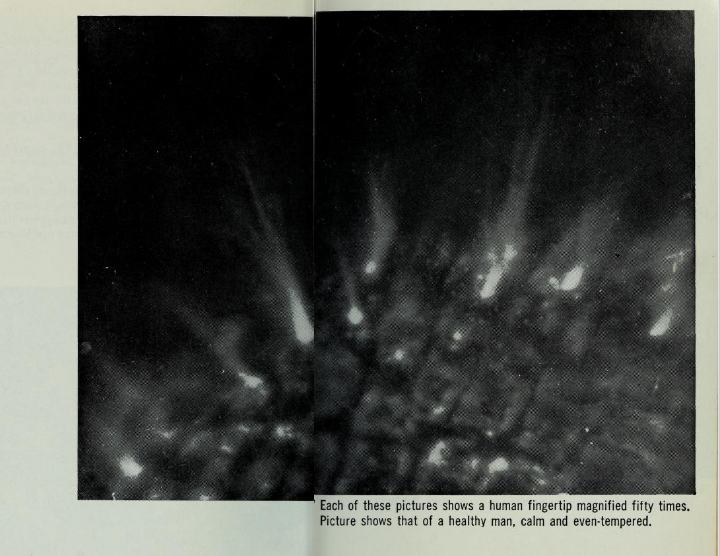 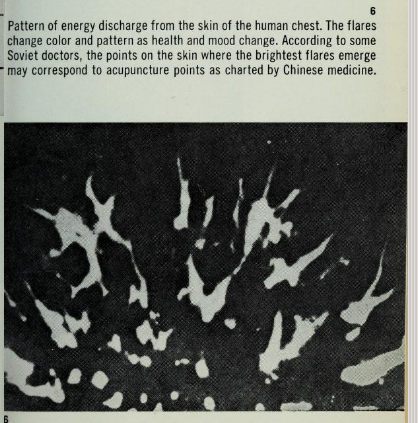 The Energy Body and Acupuncture

Dr. Mikhail Kuzmich Gaikin, a Leningrad surgeon, gazed intently at the myriad patterns of lights sparkling out of Kirlian’s hand and his own hand under the impact of high-frequency fields. Dr. Gaikin had read about the Kirlians in the Literary Gazette in 1953. Something about the picture accompanying the article set an idea ticking in him. He made the long trip to Krasnodar, southeast of the Crimea.

The Kirlians showed Gaikin pictures of a man’s body that looked like a carnival of light. Next, in the high-frequency field, Gaikin saw an unbelievable display of fireworks in his own hands—great channels of violet fiery flashes blazed turbulently. There were silent yellowish-red and blue lights like “dwarf stars.” There seemed to be craterlike depressions from which erupted not fiery lava, but radiance like arctic lights. Some of these lights seemed to shoot off into space.

“Where is this caravan of lights coming from? Where is it going?” Kirlian asked Gaikin. “Why are the yellowish-red and the blue lights always paired? And why are they different sizes? Why are the large flares violet? It seems to us this colored panorama of lights must be subject to some law. Maybe the mysteries of living nature are coded into the colors of these lights.”

Gaikin mused—could these flares be electricity from the nerves? But the signal flares didn’t correspond to nerve endings in the skin. Moreover, these same flares poured out of plants and plants don’t have a nervous system. There seemed to be no difference between the cells that glowed and those that did not glow.

The pattern of lights he saw in the human body reminded Gaikin of something he’d come across in China. As chief surgeon on the Zabaikal Front in 1945, Dr. Gaikin had seen Chinese doctors cure what he’d always considered incurable diseases—rheumatoid arthritis, epilepsy, types of deafness. The doctors used the ancient Chinese form of medicine—acupuncture. (John Hersey in his book Hiroshima reports acupuncture will even cure the effects of nuclear radiation.) How does it work? Gaikin asked the Chinese.

“An energy we call Life Force or Vital Energy circulates through the body on specific pathways,” the Chinese told him. “This Vital Energy can be tapped at seven hundred points on the skin that were mapped out thousands of years ago.” The Chinese inserted fine needles at those points to correct imbalances in this supposed primary energy flow, and thus apparently cured disease.

“You see,” they said, “these seven hundred points on the skin are in communication with organs deep inside the body and with the whole mental and physiological state of a person. Changing the energy flow on these points changes the Vital Energy deep inside the body.”

Dissection showed no trace of the pathways of this so called Vital Energy. It didn’t make sense to Gaikin, trained in Western medicine. But one thing did make sense to him. Patients got better. He studied acupuncture, tried it, and it worked. In the last two decades thousands of Soviet and European doctors have tested acupuncture and are using it today.

In the Kirlians’ tiny room, as Gaikin stared at the pictures of a human being under high-frequency fields, it seemed his hunch had paid off. The spots where lights flared most brilliantly appeared to match the acupuncture points the Chinese had mapped out thousands of years ago! Gaikin was excited. Just possibly the Kirlian discovery might give the first scientific confirmation of this five thousand-year-old system of medicine. Maybe there was also a relation between the channels of swimming light the Kirlians saw and the pathways of Vital Energy described by the ancient Chinese.

The Kirlians were intrigued too. Chinese medicine with its unusual ideas about the nature of the human body might lead to the overall theory they needed to tie together their many seemingly unrelated discoveries.

The Kirlians learned a lot about acupuncture. And so did we (See Appendix A, 9.) After going through Russian, French, and British works on the subject, we began to get a clearer idea of why our Russian friends were excited about acupuncture, why they thought it might give a better understanding of the Kirlian discovery as well as of certain psychic events. Can acupuncture, for example, help explain the different colors of the flares that they see flashing from living things?

According to the Chinese, man’s body has two kinds of energy: electrical and “Vital.” The Vital Energy, is not electricity but behaves similarly. Like electricity, it is polarized into positive and negative. Is this a clue to the two basic colors, blue and reddish-yellow, that showed up in living things in the Kirlian photos?

Acupuncture, it seemed to some Russians, might help unlock the medical meaning in the Kirlians’ pictures with greater precision than the general study of the aura. Chinese medicine states that points on the skin connect through pathways of Vital Energy to internal organs. For instance, a point on the inside tip of the little finger of the right hand is on the energy pathway leading to the heart. These points seem to show up in the Kirlian pictures as flares of brilliant light. If the intensity, color and location of the flares can be interpreted, doctors might have a window on the condition of deep internal organs like the pancreas or brain that are often difficult to diagnose.

Of all the strange phenomena they’d encountered with their high-frequency device, the Kirlians were most impressed by the ability to see disease ahead of time. Here was something that acupuncturists seemed to know all about. There’s even an old aphorism in Chinese medicine, “The superior physician cures before the illness is manifested. The inferior physician can only care for the illness which he was unable to prevent.” The Chinese believe the highest healing science deals with this invisible level of energy. A skilled practitioner, through reading of pulses, determines if there is any imbalance in the counterpart body of energy. He can tell whether there will be a breakdown in an organ long before this energy imbalance translates itself into a crippling physical fact. He then attempts to rebalance the energy flow and prevent the oncoming disease. (In ancient China, “medicare” subscribers paid the acupuncture doctor to keep them from getting sick. If they did fall ill, the doctor paid them!)

The Kirlian pictures coupled with the knowledge of acupuncture lead perhaps to a new perspective on some kinds of precognition. Every organ in the body, according to acupuncture theory, communicates its condition via the energy pathways to the skin in the form of energy patterns. A clairvoyant may look at you and prophesy, “You are going to get tuberculosis in about two years.” Instead of seeing around the corner of the future, the prophet may be aware of problems already in your energy body or he may see these problems reflected in changes of color in your aura.404

So far, coming from left field, the ideas of acupuncture seemed to tally with what the Kirlians had observed experimentally. It was bizarre. And the parallels went even further. The Kirlians had found that emotions, moods, thought all seem to have a drastic effect on these energy ‘ pictures of ourselves.

In Chinese medicine, they learned, you are always viewed as a whole—a concept which includes body, mind, and environment. The Chinese say that both habitual states of mind and sudden moods reflect in the Vital Energy. According to them, it is this energy that links the mind and the physical body. This is the modus operandi of psychosomatic illness, the means by which the mind affects the body. A negative depressed state of mind acts on the Vital Energy like a toxic substance, they say, and will eventually manifest itself as illness. Conversely, the Chinese say, a malfunction in the body could cause a mental illness. Correcting the Vital Energy imbalance in the body can correct the condition of the mind. (For this reason, acupuncture has become an adjunct to psychotherapy in the Soviet Union.246)

It may have been more than moods that caused changes in the lights flaring from the Kirlians’ hands. Acupuncturists believe Vital Energy in the body links man with the cosmos. If there is a change in the universe and environment, a resonance is produced in the Vital Energy of the human body which in turn affects the physical body. In this way the body adjusts to changes around it. The Vital Energy, the Chinese say, is affected by a host of things: the seasons, cycles of the moon, tides, thunderstorms, strong winds, and even levels of noise. Supposedly an illness and its treatment can be affected by any of these changes in the environment. Eventually the State University of Kazakhstan Russia heralded this invention. The Soviet government displayed the tobiscope at Expo ’67 in Montreal just as it played up such other advances of Soviet science as the Vostok spaceship and the atomic icebreaker Lenin.

The Soviets are serious about acupuncture. (See Appendix.) They study it at top institutes like the Gorky Medical Institute and the Kirov Institute of War Medicine in Leningrad; their scientists have rolled up a great deal of experimental data on acupuncture; they’ve shown that whatever this energy is, it does not travel on the skin, but does take a deep interior pathway. Acupuncture has been amped-up, modernized, combined with EEGs, electrocardiograms, etc.; in the USSR and Europe acupuncturists not only use needles to stimulate the points on the skin but also employ static electricity, sound, cortisone, and adrenal cream for massage.17* 246-247

Acupuncture lit up by Kirlian photography may lead to new forms of medical treatment, but there is a larger, perhaps ultimately more beneficial, implication in this mating of the ancient and the modern: a more unified view of man. This is a view of the human being linked to the cosmos; a view of man aware of and reacting, via his secondary or bioplasmic body, to changes in the planets, environment, and weather, as well as to illnesses, moods, and the thoughts of others; a view of man as an enmeshed, integral part of life on earth and in the universe.

Acupuncture with its mapped points also provided a fully developed method for finding out just how the bioplasmic body was reacting to all these changes around us. 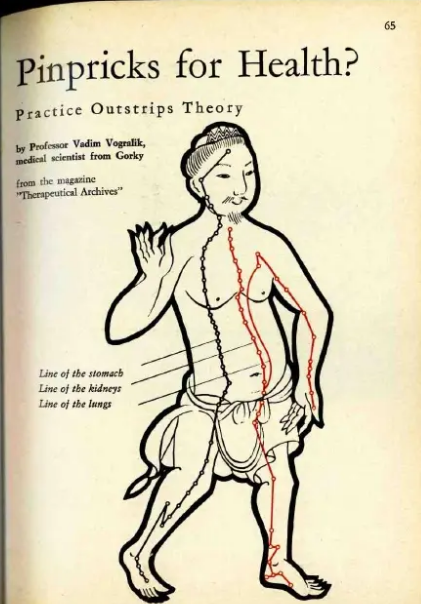 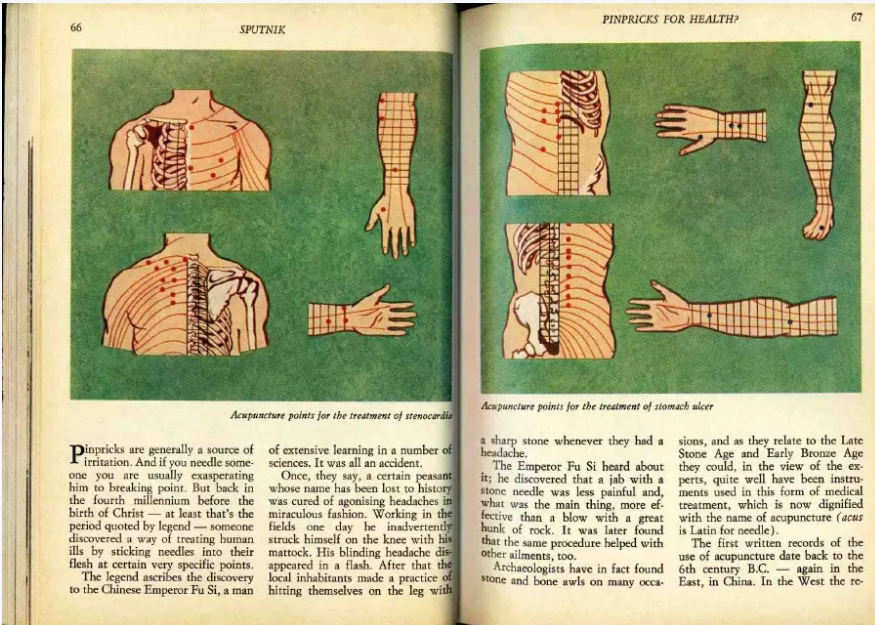 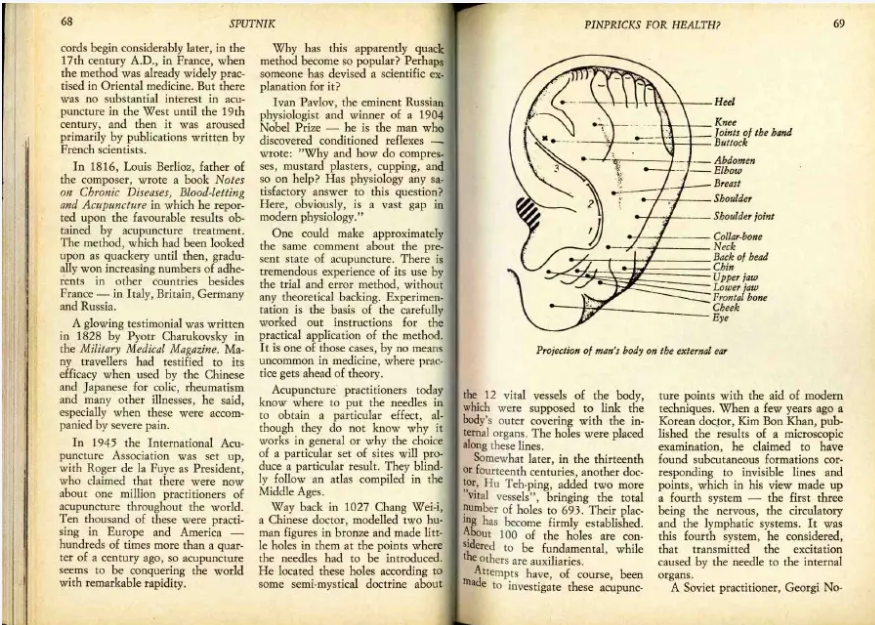 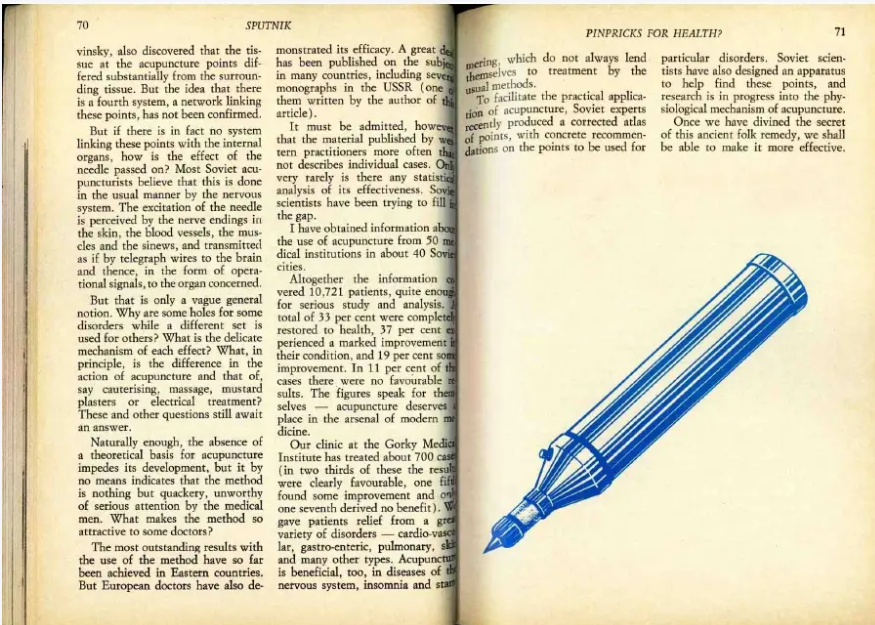