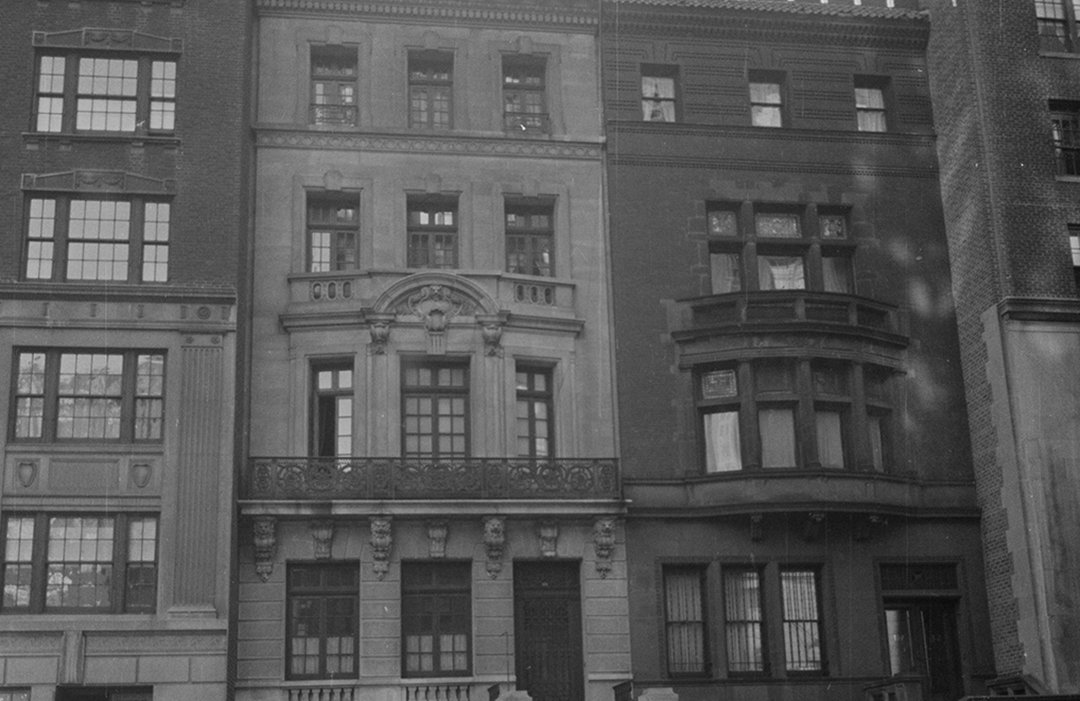 See reddit thread The Anthroposophical Society and “Abdullah” by u/Here_for_the_plot

“So we know from the Abdullah Q&A that Abdullah lived at 30 West 72nd Street in 1933. Neville mentioned that Abdullah rented the first floor from Henry Morganthau Sr. I just came across a post that discusses the history of that house.”

So, did some research and it seem we might have to abandon the idea of any connection with The Anthroposophical Society and Ab.

As we can see from the research below, Henri Zay died in November 20, 1927 and The Anthropsophical Society moved in 1931 to 230 Central Park South for four years until 1935.

From the The Genius of W. Henri Zay 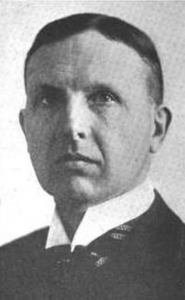 A voice teacher and ardent follower of the teachings of Rudolf Steiner, W. Henri Zay (1869-1927) was a young man of twenty when he left Cleveland, Ohio, to study with William Shakespeare in London—the latter a leading voice teacher of his time as a result of his studies with the Milanese maestro Franceso Lamperti.

Zay—a baritone—taught in London for twenty years, quite successfully it seems, before returning to America with his British wife in 1916 and writing the book that would bring him a great deal of success as a voice teacher in New York City.

Touted as an original method when it was published in 1917, Zay’s Practical Psychology of the Voice and of Life was noted for “combining the principles of the Italian school of Bel Canto with the true French school of Masque Resonance,” but what Zay really did was tap into the zeitgeist of his time—psychology and self-actualization being all the rage—while imparting technical information that was taught by exponents of Francesco Lamperti and Manuel García (notably Anna E. Schoen-René) and later surfaced in William Earl Brown’s book Vocal Wisdom: The Maxims of Giovanni Battista Lamperti in 1931.

Calling his teaching “singing on the timbre,” Zay wrote that…

There is no English equivalent for the French word “timbre,” so we must frankly appropriate it, as something which ought to be added to the general good, for in this manner the English language was formed. Also the English-speaking-race—but that is another story. 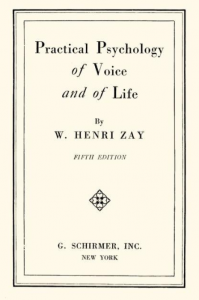 What is the “Timbre”? It is difficult to describe; as mentioned before, it arises out of the principle of “liaison” in the French Language. The old Italians were careful to make all notes join, but the timbre is something more; it suggests an enveloping overtone which comes to a rounded point in the forward dome of the face, “dan le masque,” as the French say. There is a strong vibration felt in the masque of the face, at a point immediately back of the nose, just under the eyes. I do not quite like to call it the hum in the voice, as the rather implies weakness, while the timbre gives strength; it is the forward humming ring, or ringing hum, which gives intensity and carrying power, solidity and character, whether the voice is loud or soft. It is powerful and insinuating, making it possible for the voice to be heard through a mass of orchestral sounds. It is the ring in the voice, the opposite of the shout. It is the natural overtone which bears the same relation to the fundamental tone as the spirit does to the body; it is the astral body of a tone, which carries the message from the singer to the audience. It gives the divine spark, which kindles sympathy in all within hearing, and its presence assures the singer that there is complete connection between his inner soul-forces and his outer means of expression. Without it no real expressive artistic singing can be done.

Zay died after contracting a severe cold and suffering a heart-attack at the age of fifty-seven (1927). He left a wife and four children, one of whom became a noted sculptor.

From New York Times, November 20, 1927:The Late W. Henri ZayTo the Editor of The New York Times:As a teacher of singing who has been a friend, a pupil and an associate of W. Henri Zay, the well–known voice teacher who died so suddenly on Nov. 2, may I pay a tribute to him and to his work?He was an inspiring leader among those who are devoting themselves to the teaching of singing, not just as a business or a means of livelihood, but as an art and a science, in the service and advancement of which one must bring the highest devotion of which one is capable, all of one’s energy and an untiring enthusiasm which takes no count of self. – HOMER MOWE, New York, Nov. 6, 1927 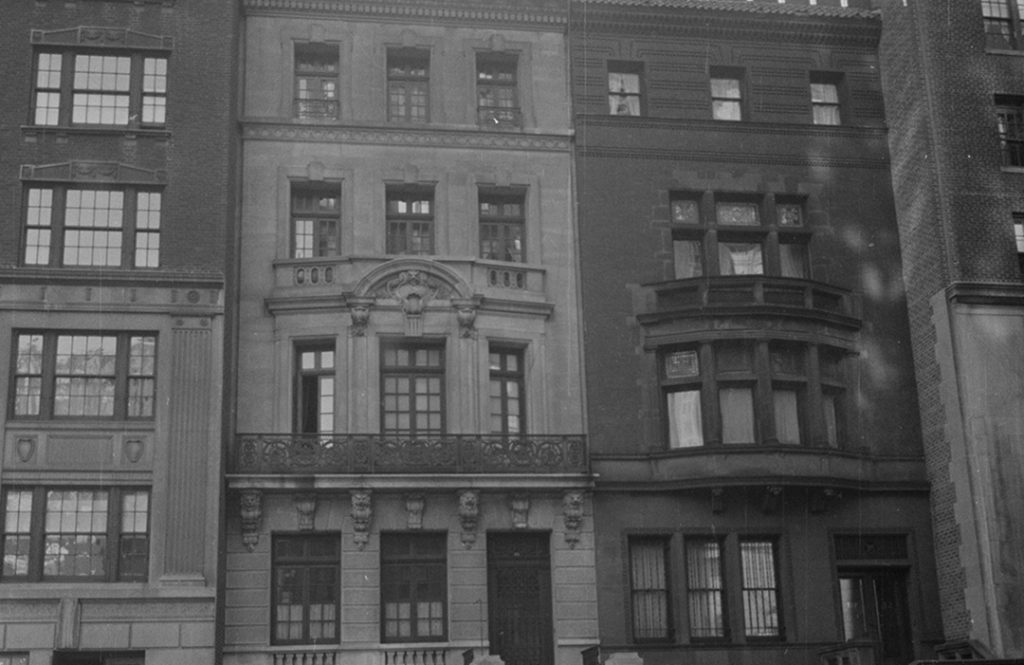 Henri Zay was in the Morgenthau building from 1923 until possibly beyond 1925 that the article says below.

On September 13, 1923, The New York Times reported that the Morgenthaus had moved to an apartment on Park Avenue and sold 30 West 72nd Street to William Henri Zay “who will remove his musical studio…to the former Morgenthau residence.”  Zay had paid the equivalent of $1.27 million today for the property.  The article recalled “it was the scene of many brilliant gatherings.”

Zay and his wife, the former Gilison Eileen Horner (who went by her middle name) had a daughter, Eileen in 1926.

Zay was a well-known voice coach and the author of The Practical Psychology of Voice.  Among his successful students was Romanian-born soprano Beatrice Kottlar.

The Zays left 72nd Street around 1925 when the Anthroposophical Society established its headquarters in the house.  The group held lectures here, like the one by Henry B. Monges on March 29, 1925 on “The Bhagavad-Gita and the Cult Scient of Rudolf Steiner.”  It operated the Anthroposphic Press here as well, which published Anthroposophy: A Quarterly Review of Spiritual Science.”

The artist perceives concretely and works creatively with his material, and the Westerner—too often superficially—also takes things as they are and tries to “make something of them.” Rudolf Steiner saw this latent attribute and spoke to it when he advised that it was through the arts that spiritual science could best be received in America. And, in this regard, it is interesting to note that the first Americans to meet anthroposophy in Europe and to bring knowledge of it back to the United States in the decade before the first World War were all musicians, young singers, almost all women, who went to Berlin to further their careers and were led by various paths to meet Rudolf Steiner in the Mottstrasse.

And when one of these young singers—Gracia Ricardo—introduced her former New York vocal teacher to Rudolf Steiner’s work in 1910, it was his studio in Carnegie Hall that became the first group meeting room on the North American continent.
And in the pioneer years that followed, it was primarily artists who took up the work of spiritual science and planted the first seeds of a new spiritual culture in the rock-bound soil of Manhattan Island, and on the West Coast in Santa Barbara and Los Angeles. One thinks of Irene Brown, the painter, and her artist-cousin, William Scott Pyle, to whom we owe the great curtain with its motifs from Goethe’s Fairy Tale, which greets us as we await the opening scene of Rudolf Steiner’s first Mystery Play, in the Goetheanum; one remembers Henry Monges, the architect; Arvia MacKaye, the young sculptress, Henri and Eileen Zay, musicians, and, very specially, Lucy Van der Pals Neuscheller, the pioneer eurythmist, who succeeded for many years in the 1920s and 1930s in bringing about each Friday evening a eurythmy recital in the studio in New York City.

From Into the Heart’s Land by Henry Barnes 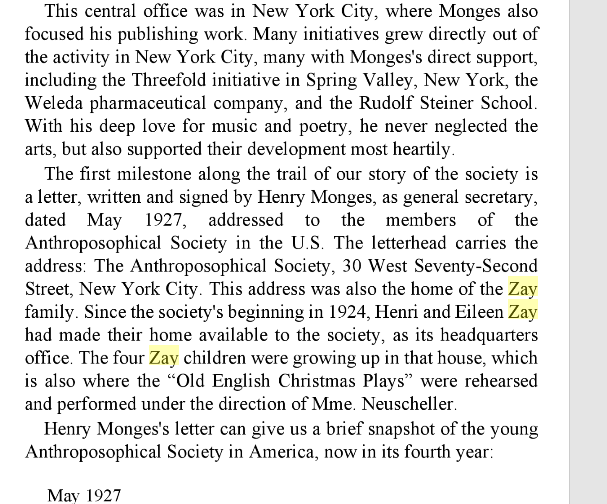 Zay was part of the St, Mark and Emerson Group in New York as early as 1923 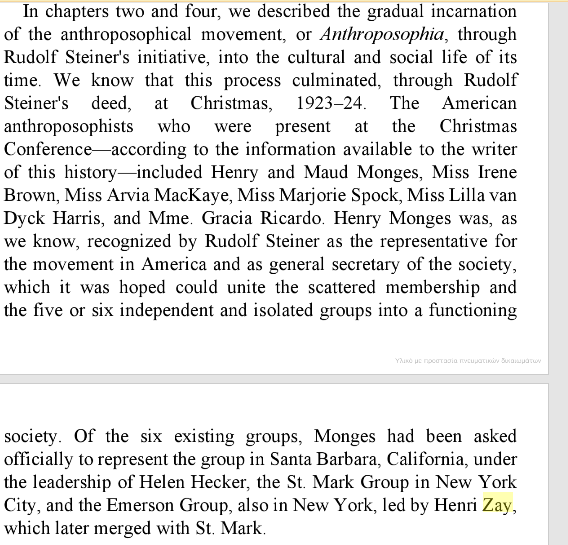 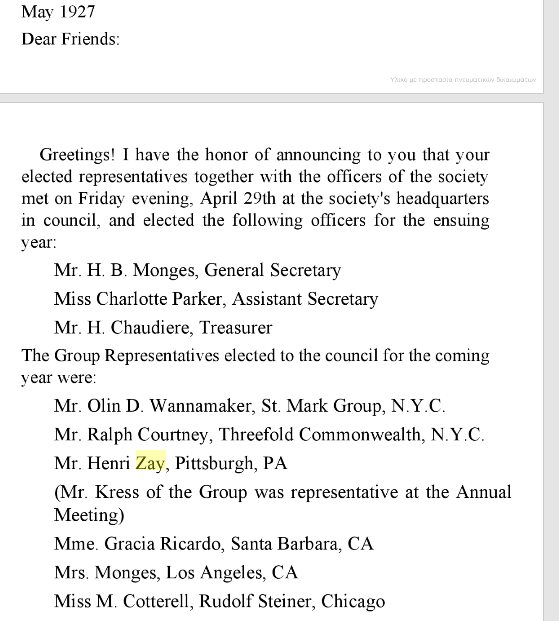 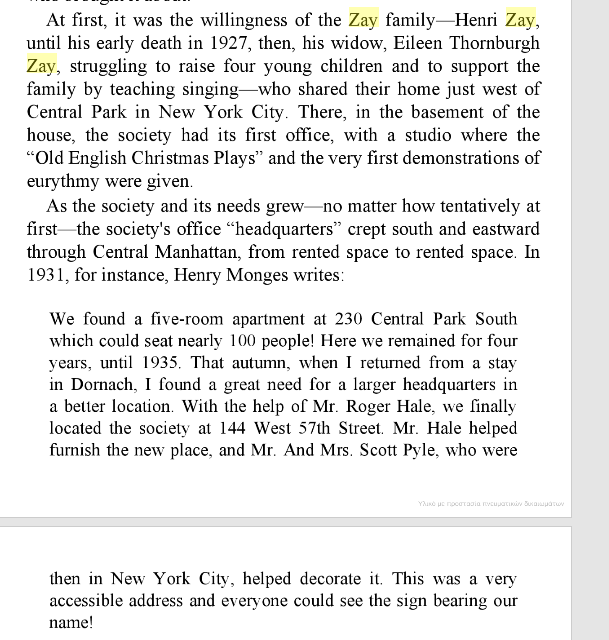 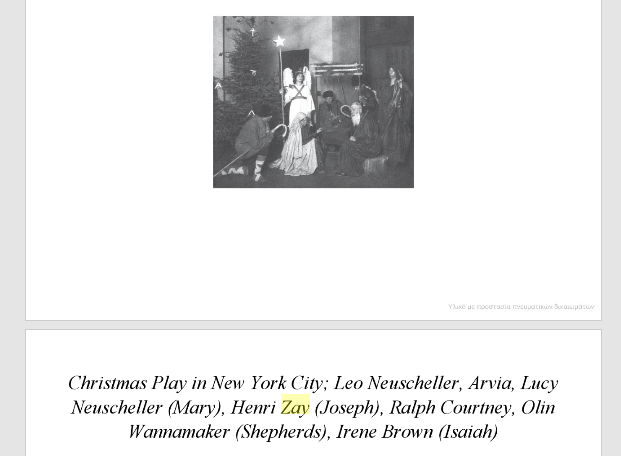 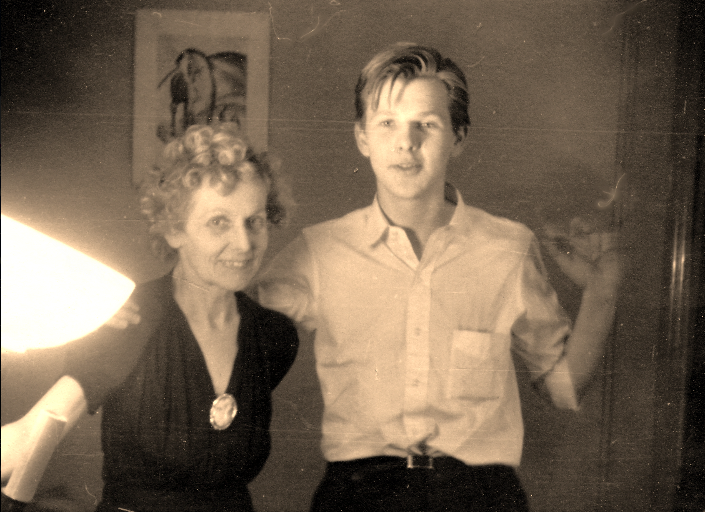 Born into a family of artists, he was the youngest of four children. His father, Henri Zay, was born in Ohio, but established himself as a singer and teacher of music and voice in London, where he also encountered Rudolf Steiner’s work and joined the Anthroposophical Society. At the outbreak of World War I, Henri Zay, as an American citizen, had to leave England and return to the United States. Eileen Horner, his fiancée, caught the last passenger ship out of England and joined him in New York City, where they were married on December 29th, 1916. It was there that Thorn was born on February 19, 1926.  Unfortunately, Henri died before Thorn was two years old and his Mother, who had grown up in a relatively well to do family in England, and had never had to work, now found herself raising four children and single handedly supporting a family during the Great Depression. She managed by giving singing lessons, but money was in short supply.

Thorn became seriously ill with rheumatic fever when he was fourteen, which prevented him from walking for an extended period of time. He also suffered from osteomyelitis, which affected his right side and the ability to use his limbs. But Thorn, who had already announced “I’m going to be an artist!,” was undaunted and started to paint using his left hand. He had hoped that he might attend the Art Students’ League to study painting, but his illness and the family’s lack of money appeared to make this impossible. However, thanks to a gift from his English godfather and to his recovering health, in 1944 he was finally able to attend, and studied painting there for three years. 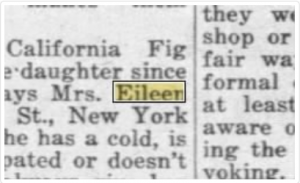 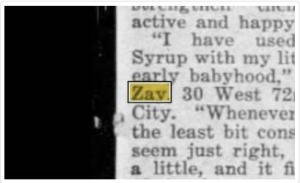 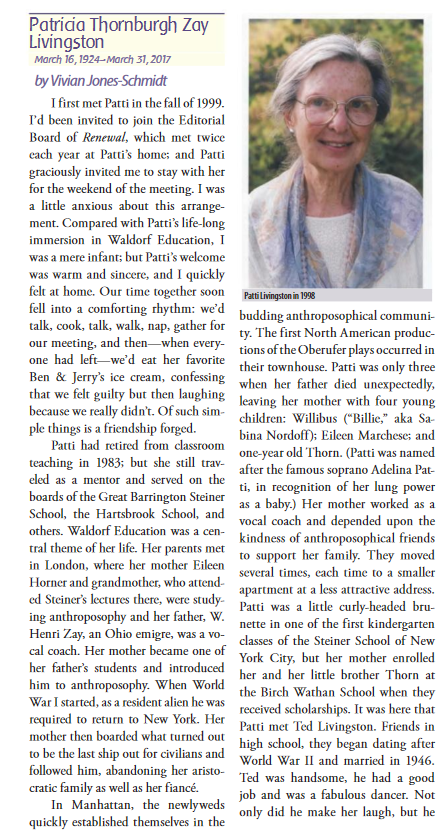